What does the abbreviation "adhib." mean in historiography or archival science?

What does the abbreviation

mean in the context of historiography and archival science?

where e.g. on page 229 the abbreviation is used in a footnote: 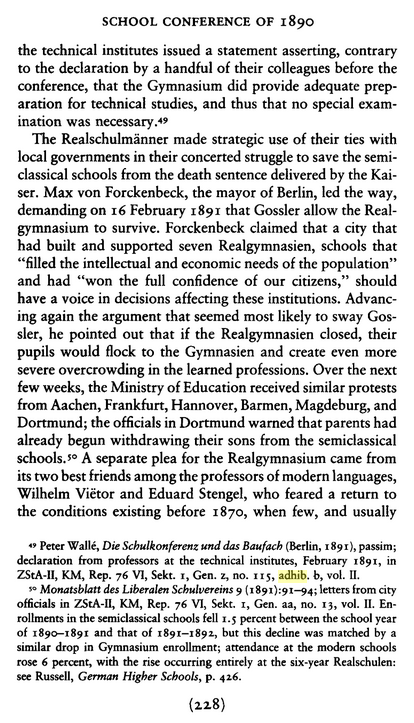 It is short for adhibendum. I think the English equivalent would be something along the lines of "annex" or "appendix". As in, "Appendix B, Vol II, Proceedings of the School Conference of 1891".

I don't believe this is a general history convention. As far as I can determine, it's mainly a German usage; the example you gave is also citing a German publication.

Not the answer you're looking for? Browse other questions tagged historiography language sources terminology latin-language or ask your own question.

9
What does the inscription on this sword mean?
8
Did the passage from Latin to English, in England, help science flourish?
5
How does Upton Sinclair's The Jungle contribute to Historiography?
10
What does "Depot Battalion" mean in Hart's Annual Army List?
2
What do we mean when we say history is a science?
3
What does 'des' mean in ancient Egyptian?