Why did the expelled Sudeten Germans and Danube Germans go to Germany, as opposed to Austria?

After the second world war, Germans that used to live in Czechoslovakia, Yugoslavia and Hungary, part of long-existent minorities there fled and/were expelled, mostly to Germany. Before 1918, they used to be citizens of Austria-Hungary, whose successor state is Austria.

Between 1938 and the end of the war Austria was annexed to Germany and ceased to exist, yet after the war it was re-created again, so those people could have been considered Austrian again. Why did the expelled go to Germany, when it would have made as much sense to reach Austria instead ?

I know Austria technically did accept some refugees, however the numbers are very marginal compared to Germany (both FRG and GDR).

This is what we are talking about:
A

That means the vast majority of ethnic or linguistically German people were near the border of Germany, and not that many really neighbouring Austria. Making the transfer out of Czech lands into parts of Germany a simple matter of practicability.
Then we have the phenomenon that after the end of Austria-Hungary in 1918 the Sudetenland-Provinz already wanted to join Germany, not Austria, not Czechoslovakia.

When the Germans were expelled from Chechoslovakia between 1945 and 1947, going to nearby Austria would have had another nasty surprise in store for Germans:

The nearest borders and the hinterland were under Soviet control. Sudeten were quite often the most ardent supporters of Nazism (both for real and just imagined in the desire for revenge) and the Soviets displayed much more consequence in punishing Nazis than the other allies did.

So we have a certain lack of opportunity due to location. We also find a certain lack of motivation due to future prospects of Austria as whole and long standing tendencies among Sudetendeutsche opting more for Germany than other parts of German speaking lands plus the prospect of harsher conditions under Soviet rule. This is of course only relevant for those that were able to choose some aspects of their destination. Most did not. 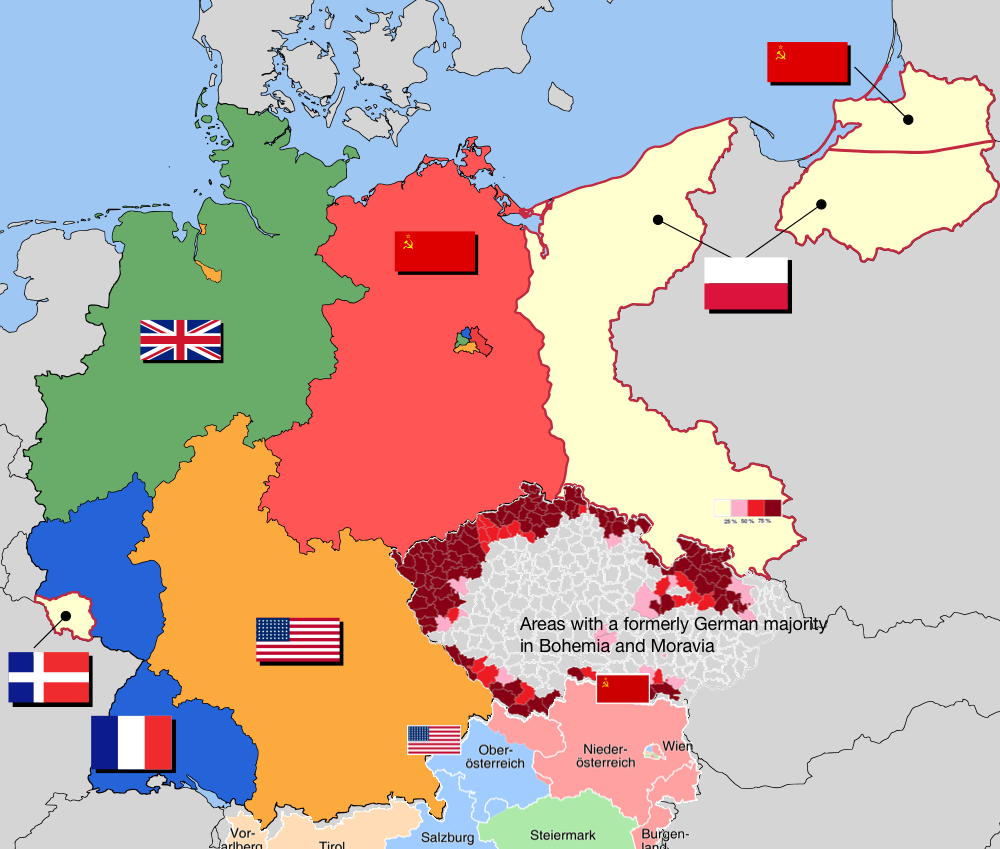 (Sloppy composite of the above pictures D, E, F to clarify the geographical puzzle.)

Whether or not the Germans had any desire after being forced to leave their homes to go anywhere of their own volition; in the first months and years after the German defeat others dictated what happened:

[From Czechoslovakia] Transfers of population under the Potsdam agreements lasted from January until October 1946. 1.9 million ethnic Germans were expelled to the American zone, part of what would become West Germany. More than 1 million were expelled to the Soviet zone, which later became East Germany.
WP: Flight and expulsion of Germans (1944–50); slightly different numbers to the same effect: Memories of World War II in the Czech Lands: The Expulsion of Sudeten Germans

Arguably, those two parts were much more capable of accepting refugees than little mountainous Austria. Another aspect to consider is that the allies were accomplices in constructing the lie of "Austria as the first victim of Nazism" and resolved to punish Germany, not Austria, by having Germany or the German zones deal with almost all expelled refugees from the East:

On 20 November 1945 the Allied Control Council had worked out the finer details of the Potsdam Agreement. The ‘orderly and humane’ deportations were to go ahead. The first tranche covered 3.5 million Germans from the east. Of these one and a half million were to go to the British Zone and the other two to the SBZ. Another two and a half million were coming from Czechoslovakia, half a million from Hungary and 150,000 from Austria. These were to be housed in the Soviet Zone (750,000), the American Zone (2.25 million) and the French Zone (150,000). A year later the British Zone had grown by 3.1 million souls, the American by 2.7 and the Russian by 3.6. Berlin’s population had risen by 100,000 and the French Zone had taken in 60,000. The population of Germany in its reduced state had grown by 16.5 per cent.
Giles MacDonogh: "After the Reich: The Brutal History of the Allied Occupation", Basic Books: New York, 2009, p190.

That means that in the first two phases the 12–14 million Germans in the East fled on their own or were evacuated West, away from the Red Army. That option largely vanished in the third phase from 45–50. Except for those German living in Romania, Hungary and those few in Yugoslavia the vast majority of them were 'simply' shifted to the left of the map. The third phase was going according to plan; the plan of the Potsdam agreement.

About 180,000 German-speaking Hungarian citizens were stripped of their citizenship and possessions, and expelled to the Western zones of Germany. By July 1948, 35,000 others had been expelled to the Eastern zone of Germany.[…]
The roughly 400,000 ethnic Germans who remained in Romania were treated as guilty of collaboration with Nazi Germany and were deprived of their civil liberties and property. Many were impressed into forced labour and deported from their homes to other regions of Romania. In 1948, Romania began a gradual rehabilitation of the ethnic Germans: they were not expelled, and the communist regime gave them the status of a national minority, the only Eastern Bloc country to do so.[…]
(WP: Flight and expulsion of Germans (1944–50); )

In Yugoslavia things were also handled differently, and from there, many did go to nearby Austria:

The relevant article from the Potsdam agreement is only concerned with Germany, Austria just isn't discussed at all:

Article XIII. ORDERLY TRANSFER OF GERMAN POPULATIONS The Conference reached the following agreement on the removal of Germans from Poland, Czechoslovakia and Hungary:-
The Three Governments, having considered the question in all its aspects, recognize that the transfer to Germany of German populations, or elements thereof, remaining in Poland, Czechoslovakia and Hungary, will have to be undertaken. They agree that any transfers that take place should be effected in an orderly and humane manner.
Since the influx of a large number of Germans into Germany would increase the burden already resting on the occupying authorities, they consider that the Control Council in Germany should in the first instance examine the problem, with special regard to the question of the equitable distribution of these Germans among the several zones of occupation. They are accordingly instructing their respective representatives on the Control Council to report to their Governments as soon as possible the extent to which such persons have already entered Germany from Poland, Czechoslovakia and Hungary, and to submit an estimate of the time and rate at which further transfers could be carried out, having regard to the present situation in Germany.
The Czechoslovak Government, the Polish Provisional Government and the Control Council in Hungary are at the same time being informed of the above and are being requested meanwhile to suspend further expulsions pending an examination by the Governments concerned of the report from their representatives on the Control Council.

And as far as the Austrians did have a say in matters, they were extremely hostile towards their former comrades, for political and practical reasons, as well as for a form of peculiar tradition:

Despite the Republic of Austria's manifold ties to German minorities in the territory of the former Habsburg Monarchy, Austrian policy in 1945–1946 was largely hostile to refugees and displaced persons. Their scope for action was, however, limited by the ultimate responsibility of the Allied occupying powers, which, despite interventions by the Austrian government, did not stop the "wild expulsions" of the German South Moravians and South Bohemia to the provinces of Lower and Upper Austria, which had been started by the Czechoslovak side after the end of the war. However, the provisions of the Potsdam Agreement were also to be applied to Austria and the Volksdeutsche ("People's Germans"~ ethnic Germans) who had come from Czechoslovakia, Hungary and Poland were to be "repatriated" to occupied Germany. This also corresponded to the intentions of the Austrian government, which saw itself materially overtaxed by the refugees, but also wanted to draw a sharp dividing line to its own Greater German traditions of the pre-war period. The Austrian Foreign Minister Karl Gruber (1909-1995, Austrian People's Party), for example, noted in a conversation with his Czechoslovak counterpart Jan Masaryk (1886-1948) regarding the Sudeten Germans that these were people "who had always caused them difficulties and whom they would prepare for anyone".
Niklas Perzi: Flüchtlinge und Vertriebene in der Republik Österreich. In: Online-Lexikon zur Kultur und Geschichte der Deutschen im östlichen Europa, 2015. URL: ome-lexikon.uni-oldenburg.de/p32875 (Stand 16.04.2015).

Not the answer you're looking for? Browse other questions tagged germany austria post-war population-transfer or ask your own question.

4
Why and how did some Germans choose to join the Stasi (Staatssicherheit)?
15
Why and how were east Brandenburg, Pomerania and Silesia taken away from Germany after WW2?
8
How/why did Plzeň become the "armourer" for Austria-Hungary?
18
How did the Germans get housing again after WWII?
11
How did communist authorities decide who is "German" and who is "Polish" when expelling Germans from recovered territories?
9
Why are Vorarlberg and Tirol part of Austria, when they are only connected to it by high mountains?
9
Why did Bavaria join Prussia/Germany instead of Austria?
6
What was the reason that Poland wanted a part of Germany north of Stettin/Szczecin and west of the Oder?