Why did the grip-centered viking shield fall out of use relative to the kite shields?

Did Normans have battle advantage with strapped kite shields over Saxons and Vikings with their grip-centered shield style of fighting?

What often comes to my mind are battles like Hastings (1066). It seems to me that grip-centered round shields were designed especially for single-combat. So do you think the reason Normans(and later whole Europe) began using the strapped kite shields was due to the fact that single-combat wasn’t as popular in their culture anymore? Were kite shields superior to the center-grip round shield when used in mass-combat? What do you think?

It's important to note that concrete information on how shields were used is scant, so a large part of any discussion on this subject is speculation and logic.

That said, kite shields had an obvious advantage in extending protection to the lower half of the body. This was especially relevant to the cavalry, and particularly so in a period when leg armour was not common, since the height of their legs make them natural targets for an enemy. Of course, the downsides of kite shields are equally obvious: they were heavy and awkward to maneuver.

That is, the benefits were less meaningful, and yet the drawbacks more serious, for leg infantry.

Round shields did not actually "fall out of use" until the Renaissance, and they also continued to be held in a central grip. It was the weight of kite shields which necessitated strapping them to the users, rather than inherent potential tactical advantages per se. Later manuals indicate that the smaller, and lighter round bucklers were extended in a fist far out from the body, so as to be ready to block any incoming blows with little movement. Strapping them to the forearm would've considerably limited this. 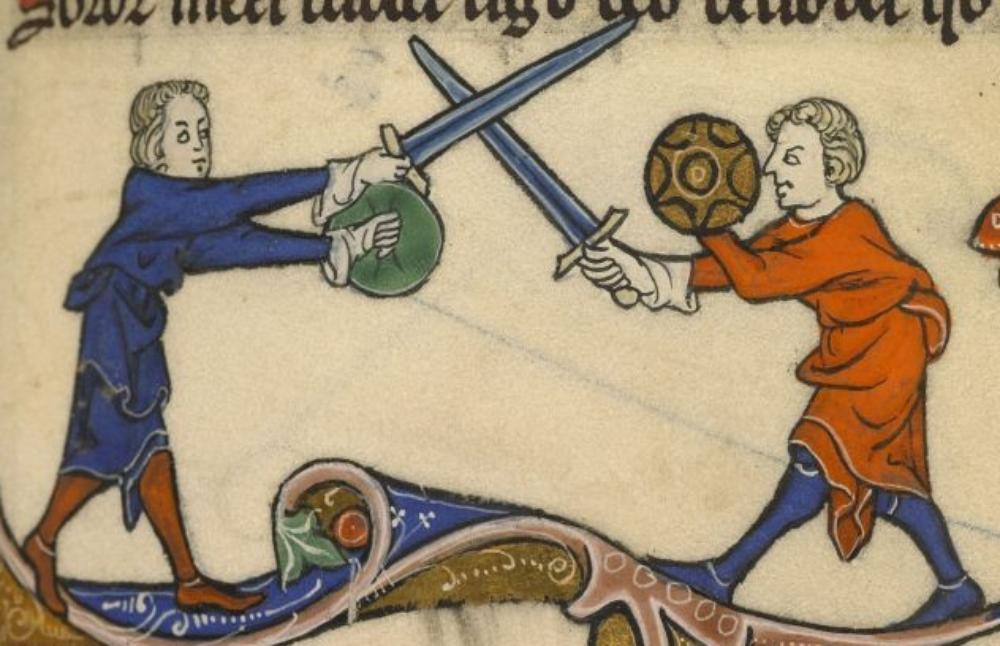 Anyway, returning to kite shields. It's probably a safe bet that it was not a coincidence that kite shields became common around the time cavalry began to dominate in Medieval Europe, and declined once leg armour became widespread. The heater shield that largely replaced them are noticeably shorter. In other words, once the benefits for leg protection diminished, kite shields were replaced by lighter and more maneuverable, shorter shields. Note that round shields remained in use throughout the same period.

For illustration, consider the knights with kite shields from the Bayeux Tapestry:

Compare and contrast with these from the Rochester Bestiary, circa mid-thirteenth century: 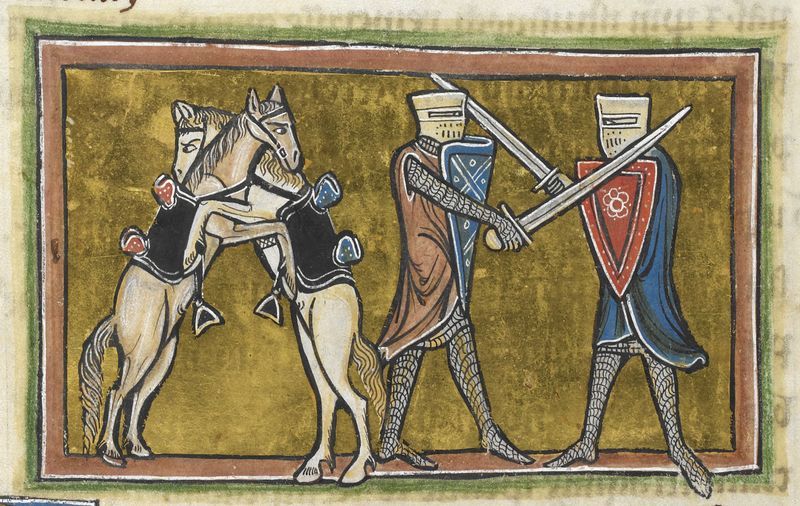 In the latter, we can see the legs were protected by chausses. This is conspicuously absent from most of the armoured figures depicted in the Bayeux Tapestry, most of whom only wore knee-length hauberks.

From personal experience using both kite and round shields, the corners on kite shield allow small forearm movements to create an effective block, and allow the wielder to take control of the opponent's weapon briefly. Although the same weight, the kite is less tiring to wield and gives more options for active versus passive defence.

Kite shields were used to protect the legs for cavalry. Also vikings used round shields for not only single combat but group combat as well, the famous shield wall being a great example of this in play.

A kite is more similar to the shape of the user. To put it another way, once a circular shield is above a certain size, a fair bit of it is protecting nothing but fresh air.

Also circles don't tessellate well - if you're trying to do a shield wall or testudo you'll have more gaps or overlaps than with, say, rectangles. Kites aren't perfect in this regard but still better.

Round shields were actually more effective in tight formation style fighting. Think about the Greek Phalanx. The left side of the Hoplite's Aspis was vital in protecting the right side of the man next to him. Whereas the use of the rectangular Scutum of the Roman Legionairy was utilized with the soldier needing atleast a 3 ft area around him to give room for the Legionaire to operate and wield his gladius. The kite style shield is in many ways, a scaled down version of the Scutum and perhaps the Normans fought in a looser formation similar to the Roman Maniples, whereas the Vikings'(and numerous other "barbarian" people's) fighting tactics nearly mirrored that of the Classic Greeks and the late Romans. A looser formation is far more flexible than a tight shield wall because the loose formation can adapt quickly to changes in terrain, enemy cavalry or heavy infantry charges, and enemy missle fire. I don't know if the Normans fought in open order, but it WOULD make sense due to their equipment and cavalry superiority.

Not the answer you're looking for? Browse other questions tagged military middle-ages technology armour combat or ask your own question.

5
Why did greaves go in and out of fashion?

25
Why did the scutum fall out of use?
35
Why didn't Japanese infantrymen and samurai use shields?
105
Why did archery not make a comeback when armor was phased out in the 18th century?
8
How and why did the Cavalry lance temporarily fall out of favour during the 16-18th centuries?
13
Why did helmets have this metal thing between the eyes?
5
Why did greaves go in and out of fashion?
18
After the fall of the Roman Empire, where did their armor go? Was it used by any dark ages forces?
5
Why can't people on the back of the phalanx "reorient" their shield?
40
Why were helmets and other body armour not commonplace in the 1800s?