What was the heaviest example of horse armor (barding) from 16th and 17th centuries?

I would like to ask what the heaviest known example of armor for war horses is. Specifically, I'm asking about horse-armor in the 16th and 17th centuries (European, primarily, but I will accept other examples).

The answer I'm looking for is about horse-armor intended for warfare. However, I will accept answers relating to tournament armours.

The estimate I've seen for how heavy horse-armor is, is that it was about as heavy as a knight's armor (about 60 pounds tops, by his estimate). Is this accurate?

The heaviest example I could find was this outfit, which according to the photographer was on display at the Zwinger museum in Dresden back in 2005. He said it was displayed as "16th or 17th century". The museum in question probably has some info on its weight. 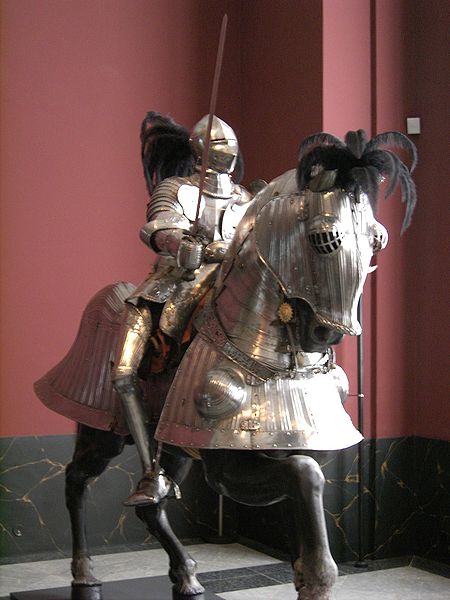 However, from everything I could gather, this level of barding was uncommon by the 16th Century. Protective barding seems to have primarily been a reaction to the longbow, as bowmen at battles like Crecy and Agincourt found they were able to defeat heavy cavalry by targeting their horses.

The Longbow was on the way out as an army's principle weapon by the beginning of the 16th Century, replaced by firearms. For whatever reason (I suspect lack of effectiveness against firearms) I cease to be able to find a lot of images of heavily barded horses after this point.

This nifty page on the various types of barding is a good illustration of the point. All of the examples shown of full coverage barding are from the 14th century.

Not the answer you're looking for? Browse other questions tagged 17th-century 16th-century cavalry records armour or ask your own question.

17
Did the syphilis epidemic start the 16th and 17th century wig craze?
9
Inflation rates in Spain and Portugal during the 16th century
2
What was the purpose of tunnel fighting in a 17th century siege?
5
What was the fate of Gülbahar, the chief consort of Sultan Suleyman of 16th century?
10
What metallurgy advancement allowed the transition from mail hauberk to plate armor?
4
How much leisure time was enjoyed by English peasants in the 16th century?
0
Why the belt or strap in some plate armor and some other armor exposed in the middle front side?
36
What was the point of horse armour?