Why did Native Americans originally migrate to the Americas?

Native Americans migrated to America around 13000 or 15000 years ago just around the last ice age. I read that during the first wave of migration, they used the Beringia strait to travel across from Asia. However, considering there was little to no knowledge of the new world I wonder why would the tribes risk travelling so far?

Correct me if I am wrong but the global temperatures around that time were around -5 degrees Celsius. It seems unreasonable for humans at the time to take the risk to migrate towards the north in search for a place that may or may not exist. Also to consider is the fact that they wouldn't have the best clothing for the weather, making them more susceptible to succumbing to the cold. Since humans still migrated under those conditions, there must be a very strong reason why they did so. Tribal conflicts, unfit weather and the human tendency to migrate doesn't seem valid reasons to migrate under such extreme conditions.

However, considering there was little to no knowledge of the new world I wonder why would the tribes risk to travel to far . . . it seems unreasonable [humans would] risk it to migrate towards the north in search for a place that may or may not exist

In a general sense, this is not particularly remarkable. All humans evolved in Africa, and from there we spread throughout the whole of Eurasia - reaching even Australia. What you called the "new world" was no newer to the Amerindian ancestors in Siberia, as Arabia was to the early humans in East Africa. Or more to the point: Provideniya today is over 11,000 km from Djibouti. What was another 400 km across the strait to Nome in Alaska?

Of course, it is exceedingly unlikely that one individual or group traversed any significant fraction of such a large distance. Instead, as @jamesqf commented, tribes or subtribes would've moved short distances, but over multiple generations. Humans were hunter-gatherers, dependent on ranging for food, so it was both a natural inclination to explore beyond the horizon, and to move around according to resource availability.4 When faced with pressures to migrate - whether out of conflict with their neighbours, in pursuit of food, or due to overcrowding - they already knew where they could go.

In other words, they weren't searching - they could see where they were going. Naturally, you'd only expect them to move in habitable directions. Doing so eventually took some of them to North America, because back then, the area looked nothing like it does today.

during the first wave of migration, they used the Beringia strait to travel across from Asia.

There was, in fact, no strait at all: Beringia was a massive land bridge, exposed by low sea levels due to the Earth's glaciation. In other words, the early human inhabitants of North America simply walked over, a few steps at a time. 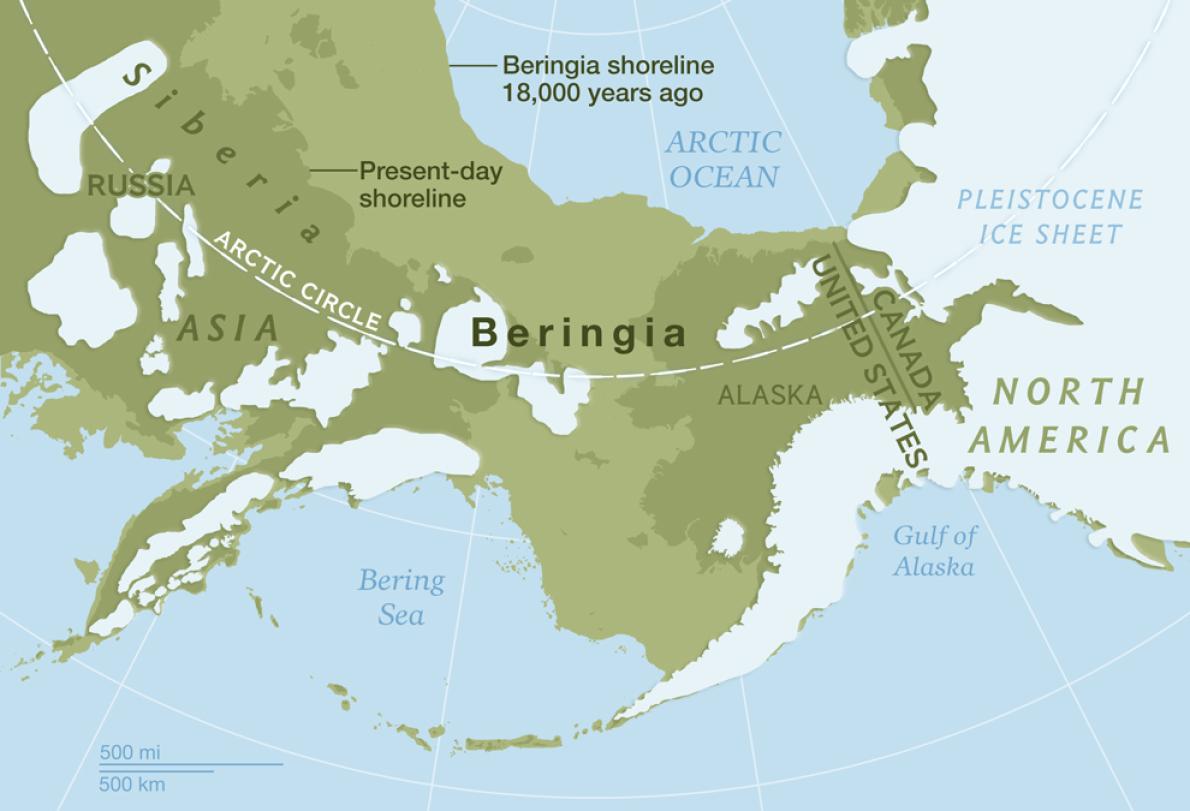 global temperatures around that time were around -5 degrees Celsius,

As @justCal pointed out, it was actually 5 °C lower than today, not negative 5 degrees. The ice-free parts of Beringia was thus certainly habitable. In fact, it formed an important glacial refugium, a relatively hospitable region in which many tundra flora and fauna survived glaciation.

Tribal conflicts, unfit weather and the human tendency to migrate doesn't seem valid reasons to migrate under such extreme conditions.

The exact details of early human movement into North America is disputed, but it may well be that they didn't. The earliest concrete evidence of human settlements in North America dates only to about 15,000 years ago, yet genetic studies indicate that Amerindians diverged from Siberian populations over 25,000 years ago. One explanation for this not insignificant gap is that those humans were stuck inside the Beringia refugium during the worst of the ice age.1

From about 17,000 years ago, rising temperatures began unlocking routes out of Beringia. In other words, migration happened after warming rendered conditions less extreme. As ice sheets retreated, humans probably followed the expanding vegetation out into the rest of North America,3 ahead of the flooding that began to submerge their former refuge beneath the Bering Sea.

This is known as the Beringian Standstill Hypothesis, proposed in 2007 by Erika Tamm et al. It is as yet unproven due to a lack of archaeological evidence - perhaps because humans settled in the lowland areas of Beringia, which are now underwater.

1. Tamm, Erika, et al. "Beringian standstill and spread of Native American founders." PloS ONE 2.9 (2007): "The finding that humans were present at the Yana Rhinoceros Horn Site dated to 30,000 ybp suggests that the isolation in Beringia might have lasted up to 15,000 years. Following this isolation, the initial founders of the Americas began rapidly populating the New World from North to South America."

2. Fagan, Brian. Fishing: How the Sea Fed Civilization. Yale University Press, 2017: "Were there humans in the refugium during the LGM? It is certain that there were, not because of known archaeological sites but because of newly acquired genetic data from modern populations. Native Americans are descended from groups that lived in the refugium and were isolated from their mainland Siberian ancestors during the LGM. This scenario has groups of hunter-gatherers living there during the coldest millennia."

3. Hoffecker, John F., and Scott A. Elias. Human Ecology of Beringia. Columbia University Press, 2007: "Not only is there a correlation between the spread of people and shrub tundra into the lowlands at 15-14 cal ka, but also there's a correlation between later movement of shrub tundra and human occupation into upland areas as well . . . increase in wood fuel was the factor."

4. Cribb, Roger. Nomads in Archaeology. Cambridge University Press, 2004: "Hunter-gatherer migration is centred on procurement and consumption . . . the territorial system of the hunter-gatherer is based on moving himself towards his resources, or moving resources to people, for purposes of consumption."

To address the temperature component:

Correct me if I am wrong but the global temperatures around that time were around -5 degrees Celsius.

You are correct, however it should be noted that the Bering strait would have been significantly warmer.

Theres a few links I can refer to, but this is the best: http://www.sciencemag.org/news/2012/04/land-bridge-caused-wild-temperature-swings

The Bering Strait being open to water flow vs closed impacts our globes climate heavily. In particular:

If waters of the far North Atlantic don't sink, says Hu, much of the large-scale ocean circulation worldwide temporarily collapses. One result: the Gulf Stream, which brings climate-warming waters from the equator to the North Atlantic, comes to a halt.

In short, the North Atlantic is thrown into a heavy cooling cycle that sees it's temperatures (including those of Britain) to drop signficantly. This would have seen northern Europe far colder than today.

The reason why the Native Americans came to America is because they had the urge to explore and conquer their own world and the new world. The proof behind this is that human's naturally have the urge to explore because we are curious creatures. Just like if you were stuck in a house for 18 years and never could escape, (my life). You would have the urge to get out of your place and explore. That is why tourism is so high. I mean, like in San Marino, 22% of their GDP is based on tourism. We just have the urge to travel and explore. The reason why we wanted to conquer is because we humans feel like we need to be a higher authority over each other. That is why monarchies are formed, because they want to make a government and rule over people. It is like how people want to live on Mars, they want to explore and conquer the land. Even land on Mars and the Moon is for sale, for people to have.,

Not the answer you're looking for? Browse other questions tagged native-americans north-america prehistory migration or ask your own question.