Did classical Romans wear any sort of swimwear?

Say that a classical Roman decided they wanted to go for a swim in a lake or at a beach, and they expected other people to be able to see them. Would they have worn some sort of swimwear or gone nude? If they did wear swimwear, what would it have looked like?

The Romans, and indeed the classical world in general, would've usually swam in the nude. See for instance the following depictions of naked divers, though they are not precisely Roman. 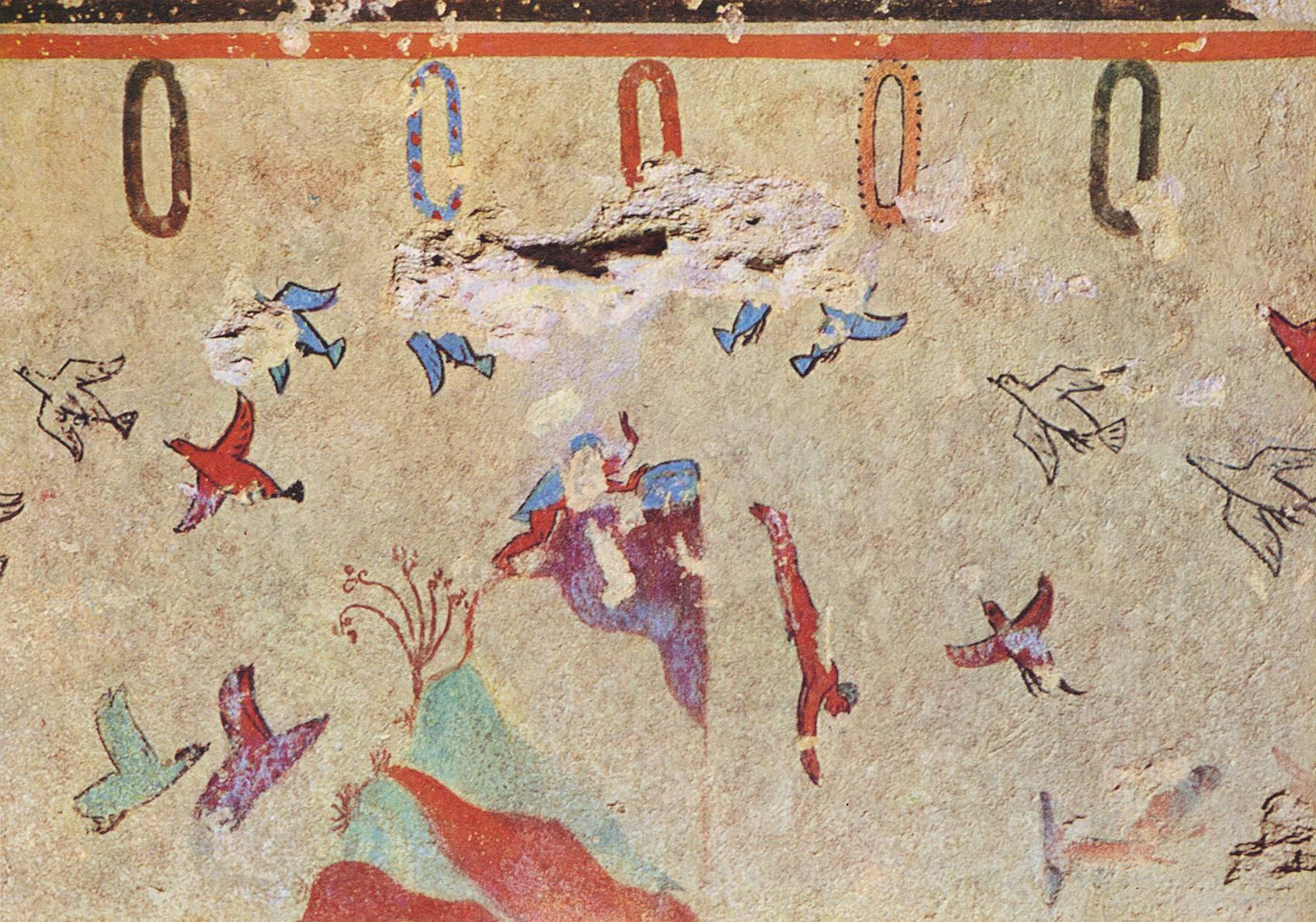 Frescoes from the Etruscan Tomb of Hunting and Fishing in Central Italy. Source: The Database of Ancient Art

Fresco from the Greek Tomb of the Diver in Southern Italy. Source: Lapham's Quarterly

Keep in mind that Classical Greeks performed athletics naked in general, and that the Romans had adopted their customs - over the protestations of conservatives, who found the nudity revolting. It would be quite strange to make an exception for swimming, of all sports. In fact, ancient swimming is so closely associated with nudity, that aversion to it has been proposed as explanations for why certain groups did not know how to swim.

One other point to consider is that Romans regularly bathed, publicly and nakedly, in their famous thermae since at least the Republic. Skinny dipping isn't much of a leap from going to a public bath. In fact Roman soldiers from the Campus Martius were said to have gone swimming in the Tiber after training to cleanse themselves. As Plutarch noted in his Parallel Lives:

[Roman] Sons-in-law used to avoid bathing with fathers-in-law, disliking to see one another naked; but having, in time, learned of the Greeks to strip before men, they have since taught the Greeks to do it even with the women themselves.

Of course, it is conceivable that some individuals may have gone for a swim without bothering to undress, or perhaps in their undergarments. The Roman military in particular left many records of soldiers swimming across rivers, sometimes even with their armour on. For instance, Plutarch claims Sertorius crossed the Rhone while wounded and in full armour. Horatius Cocles famously defended a bridge into Rome as it was being demolished, and retreated by swimming, supposedly also in armour. Presumably neither of them had the leisure to undress before their enemies arrived. Nonetheless, the veracity of such extraordinary feats is in doubt, and they were certainly not the norm.

In any case, purpose made swimwear in general did not emerge until after the Renaissance, as bathing suits. Naked swimming continued to be widespread in Europe, at least for men, until relatively recently. While the modern bikini's design has been traced to the Roman subligaculum and strophium (briefs and breastbands, i.e. a "two piece bikini"), they were not worn as swimwear. The Roman women so clothed are portrayed as engaging in general athletics on land, with no sign of swimming. The strophium basically served the same functions as a modern sports bra.

Roman women wore breastbands, and occasionally garments like briefs, but are only rarely shown wearing both: the classic instance is the so-called 'bikini- girls' on a mosaic from Piazza Armerina (Sicily, fourth century AD). Such garments would seem to have been worn by women athletes or acrobats – there is no evidence that they were worn for swimming or sunbathing.

Cleland, Liza, Glenys Davies, and Lloyd Llewellyn-Jones. Greek and Roman Dress from A to Z. Routledge, 2007. 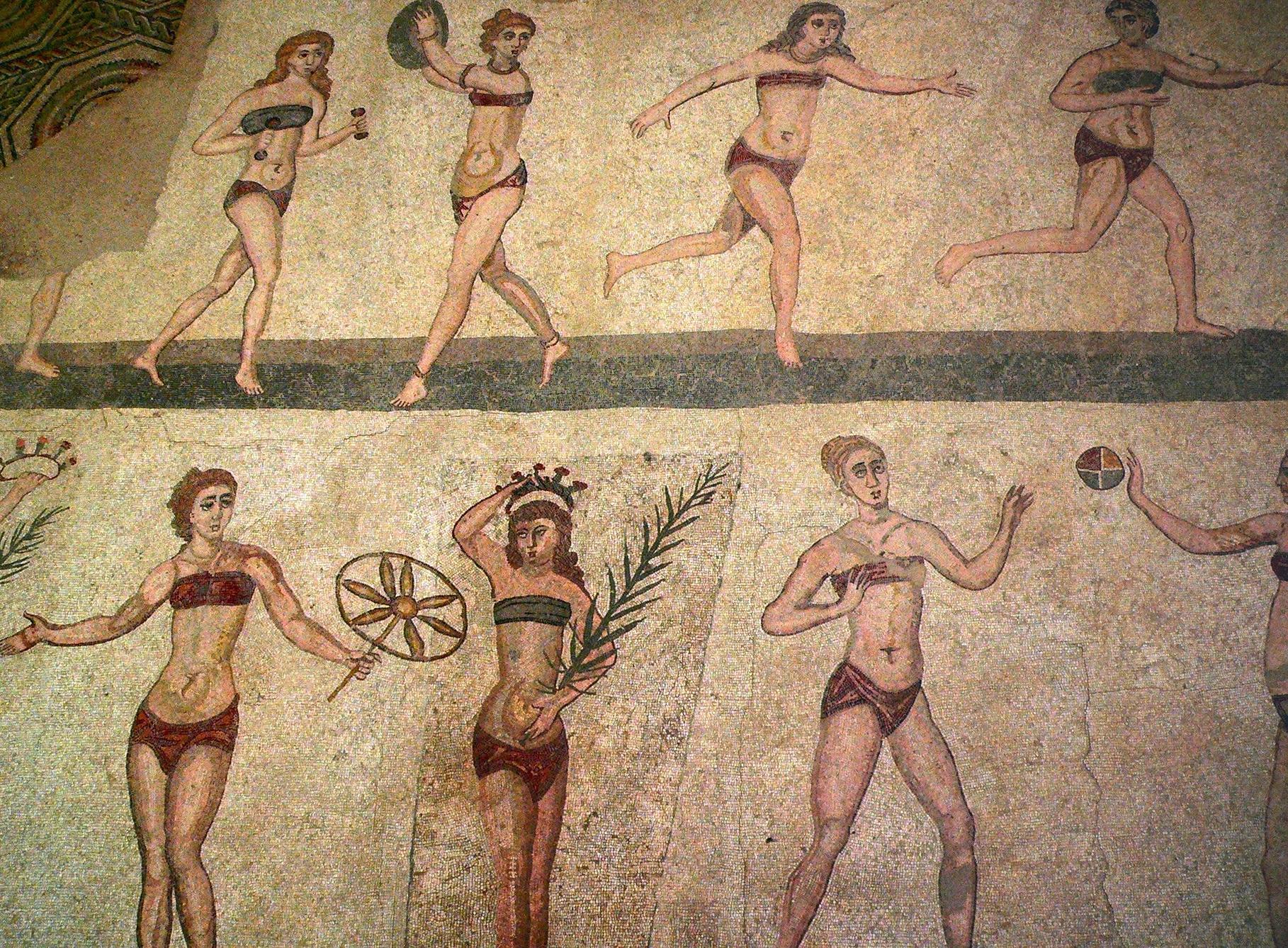 Not the answer you're looking for? Browse other questions tagged ancient-rome social-history clothing sports or ask your own question.

29
What form of home address did Romans use?
19
How were small swords worn in the 18th century?
8
What did ancient Romans wear when sleeping?
11
Why did post-Roman rulers abandon tax-paid army?
44
How did the ancient Romans count with their fingers?
6
When and where did people first start wearing underpants?
10
How did the Romans mint coins?
6
What did the battle order of a deployed Roman legion look like?
3
Why would 19th century parents make their babies wear stiffened bodices?