What was different about the “right” (recto) side of papyrus sheets compared to the other side?

Usually only one side of papyrus sheets was used to write on in classic antiquity. What is the difference between the two sides of a sheet, and why would you write on "recto" only?

A little Googling suggests that it has nothing to do with the writing surface itself, but was just a common-sense result of how a roll of papyrus behaved. This essay from the US' Metropolitan Museum of Art says:

Papyri were always rolled with the vertical-running pith on the outside because of the natural tendency of the sheet to curve in that direction; inscriptions and illustrations on a papyrus roll are generally on the horizontal side of the sheet, where they would be protected when rolled up (25.3.31).

Several reasons added up to prefering the recto side:

As long as the roll was the preferred form for books (yes, you can fold papyrus and yes, it was done quite a lot when using it for codices, 2./3. century AD): You had to choose one side because the form of the medium(*) made it highly impractible to use both sides for one text. The scripture was done on the inside, for better protection from external forces. Papyrus tends to roll itself this way (recto on the inside), so not "counter-roling" it seems a good idea. So, recto is your choice.

Plus, the already mentioned stripes of papyrus fibre running horizontally would help the scribe to stay "in line", write a straight line and it is supposed to be easier to write on this side then the other, less scratchy.

Of course, there are many examples for the use of both sides, mostly secondary use and notes (just as one would write on the backside of a letter today), but I do not know of an example where only the verso was used.

(*) The form of the medium "bookroll" demands scripture in columns which are placed next to each other (running down all the way the short side of the roll), 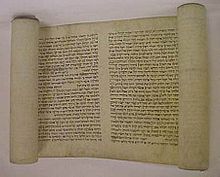 The reading practice was to unwind the next column on the right while winding the already read part up on the left. Doing so, the reader always had several columns in view.

... the difference between the two sides of the sheet ... stems from the strips being at right angles to each other. The recto side, on which the strips run horizontally, was the side generally preferred for writing, while the verso, which had vertical strips, was less frequently used. - Etherington & Roberts, Bookbinding and the Conservation of Books: A Dictionary of Descriptive Terminology

There is also the fact that papyrus books were written on scrolls. You can't really write a continuous text on both sides of the scroll.

Not the answer you're looking for? Browse other questions tagged ancient-rome classical-antiquity book writing or ask your own question.

8
What was the origin of the Classical Antiquity culture?
27
What is the evidence to claim that political order in ancient Rome was sufficiently different under “kingdom”, “republic” and “empire”?
8
Did Ancient Rome use lead styli?
14
Did the Romans have writing desks?
3
What was special about ground foods for sacrificial meals?
5
What adaptations allowed left-handers to write left-to-right with dip pens?
112
Why, in ancient battles, did being encircled mean defeat?
8
Parchment and papyrus costs in Roman Empire
6
What was the medium for Marcus Aurelius's Meditations?
7
What did the Jews during the First Jewish-Roman War know about other anti-Roman revolts?