My question: How long did the Norwegian prince and his mother stay at the White House? I've found online sources that detail he spent the war in Washington DC, but no dates for staying at the White House. The White House residential quarters aren't that large, were they really there for the entire war?

In April 1940 the Norwegian royal family was forced to flee Oslo when the Germans invaded.

The Doris Kearns Goodwin book No Ordinary Time: Franklin and Eleanor Roosevelt and the Home Front in World War II; contains this picture of the current King (then Prince) Harald V. playing with Franklin Delano Roosevelt's(FDR's) dog, Fala, on the North Lawn of the White House in 1944. 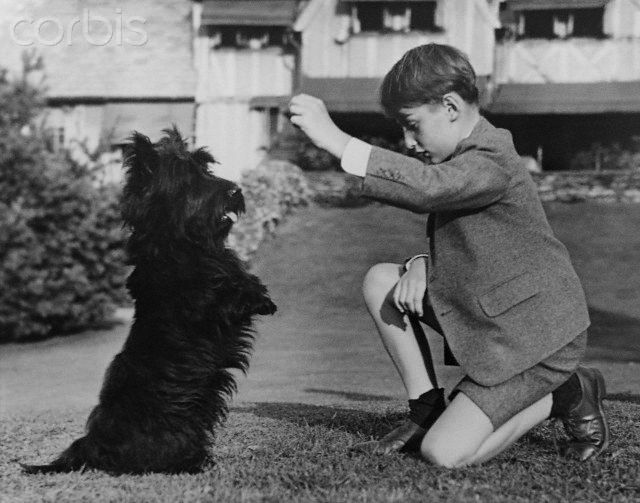 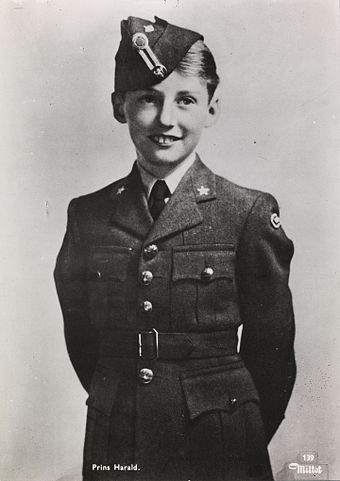 In the book it says that the young(second grader) and his mother lived at the White House with Eleanor and FDR throughout the war. They originally went to Sweden but even though she was a Swedish Princess they were denied a VISA and left for fear of being sent back to occupied Norway. The young Prince Harald V - 7 years old in the picture- and mother then went to Finland and eventually came to the United States. The crowned prince and father stayed in London with the government in exile. The book goes so far to say FDR arranged for the King of Norway to fly across the Atlantic on Christmas to celebrate with his wife and son on several occasions.

Princess Märtha following an invitation by President Roosevelt, she went to the United States on United States Army transport American Legion, via the then Finnish port city of Petsamo. In the U.S., she and her children initially stayed in the White House. Crown Prince Olav, however, had gone with his father to the United Kingdom, where he worked with the Norwegian government-in-exile. Thus, the crown couple, as were many couples during the time, were separated for much of the war.

President Franklin D. Roosevelt directed that American Legion leave New York immediately and proceed to Petsamo in northern Finland. There, she was to embark the Crown Princess Märtha of Norway and her party and bring them to the United States, their homeland having fallen to the Germans the previous spring. Further, as Acting Secretary of State Sumner Welles reported to the United States Minister in Sweden, the President also desired that Mrs. J. Borden Harriman, the former American Minister to Norway, return in the same vessel. The transport would "likewise bring back to this country such Americans in Scandinavian countries as can be accommodated and as may not be able to return safely in any other way."

American Legion — her neutrality shown clearly by the U.S. flags painted prominently on her sides — sailed for Finland on 25 July, and reached Petsamo on 6 August, as scheduled. On the 15th, she embarked Crown Princess Märtha, and her three children, the Princesses Ragnhild and Astrid, and Crown Prince Harald. The Army troopship also embarked a host of American nationals and refugees from a variety of countries: Poland, Finland, Estonia, Latvia, Lithuania, Sweden, Norway, Denmark, Germany, and the Netherlands, the total number of people being 897.

In August 1941, Crown Princess Märtha traveled with President Roosevelt aboard the presidential yacht, USS Potomac, and sailed to Newfoundland and Atlantic Charter with Winston Churchill.

Crown Princess Martha of Norway with her three children reportedly arriving in New York City in 1940. 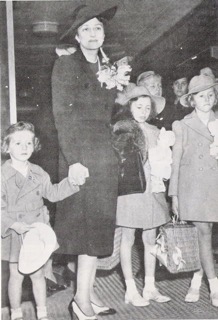 Even though she was a former Swedish princess, some in Sweden believed her and her children compromised the country’s neutrality by being in Sweden. The four royals and three staff members then traveled to Finland.

At some point President Roosevelt invited Martha and her children to stay at the White House. The United States was also neutral at the time.

Crown Princess Märtha with her husband, Eleanor Roosevelt, Thomas J. Watson and Princess Juliana of the Netherlands in 1944 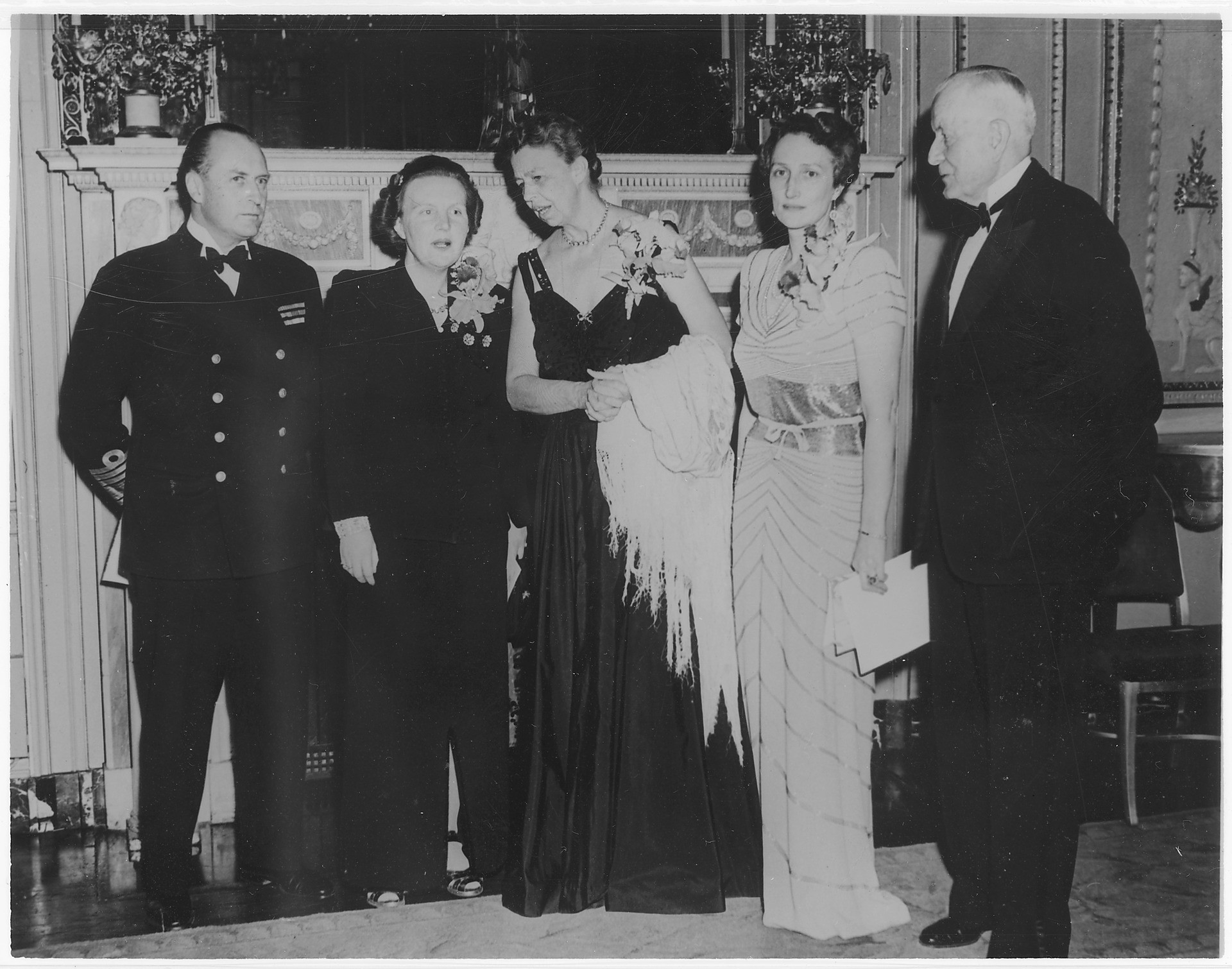 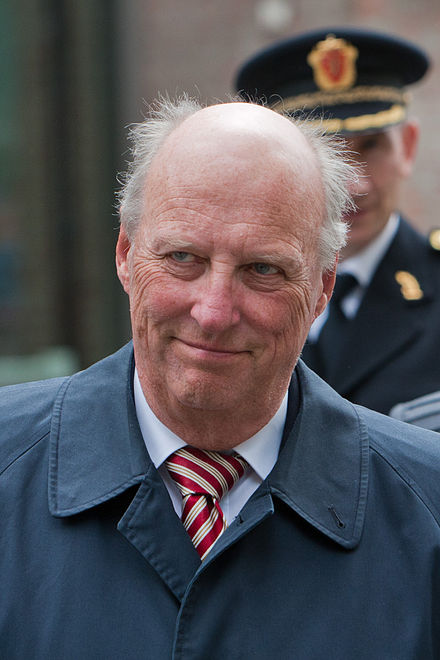 It seems that Crown Princess Märtha and her three children, including prince Harald, didn't stay at the White House for very long. Several sources comment that they initially stayed at Roosevelt's Hyde Park estate, then (briefly) at the White House, before moving to Bethesda. For example, an article in the Washington Post observes:

They stayed briefly at [Roosevelt's] Hyde Park estate and then at the White House, before they settled into a Tudor-style mansion north of Bethesda, off a small road called the Rockville Pike.

It seems that while they were living at Bethesda, Harald attended the Whitehall School.

They arrived in New York aboard the American Legion on 28 August.

From late 1940 until 1945 the family lived in a house on a 105-acre estate named "Pook's Hill," in Bethesda. Several sites state that they lived there from October 1940, but do not quote sources. They were certainly living there by 12 November 1940, when the Pittston Gazette, and other newspapers, reported that President Roosevelt had visited for tea after laying the cornerstone of a new naval medical building at Bethesda.

(That property had been purchased by the Norwegian government and would be sold in 1946.)

So, they could not have lived at the White House for more than 2 months (late August to late October). It was probably rather less.

We have photographic evidence that Harald met, and played with, FDR's dog Fala on at least one occasion. Probably more often in fact. However, as to how well he knew the dog, I'm not sure that was ever recorded by history.

This Norwegian site (Royal House of Norway) states that:

While King Haakon and Crown Prince Olav stayed in London, the Crown Princess lived with the children in the outskirts of Washington, DC, until 1945, when peace was declared.

This would presumably be definitive.

11
Why did American public opinion move away from isolationism in 1940-41?
13
What's the story behind this photo of hikers who brought white plague cure to President Wilson?
9
Did George McGovern publicly support Jimmy Carter in 1976?
14
Under what legal theory was Mary Surratt hanged as an assassin of President Lincoln in 1865?
9
Meaning and usage of "Child of State"?
12
Who advised FDR on foreign policy before and during WWII?
4
Was Woodrow Wilson really a Liberal?
29
Why did the Allies Invade French North Africa?
3
What is the history of the tradition of the out-going president attending the inauguration of his successor?