I recently visited the Basilica di Santa Maria in Aracoeli in Rome and found that the floor was covered with tombstones. Some of the tombstones simply contained text and decoration, while others included a sculpture of a human figure. Some of the stones were sufficiently worn out that it was difficult to read the text / the details in the face or clothing had been lost. 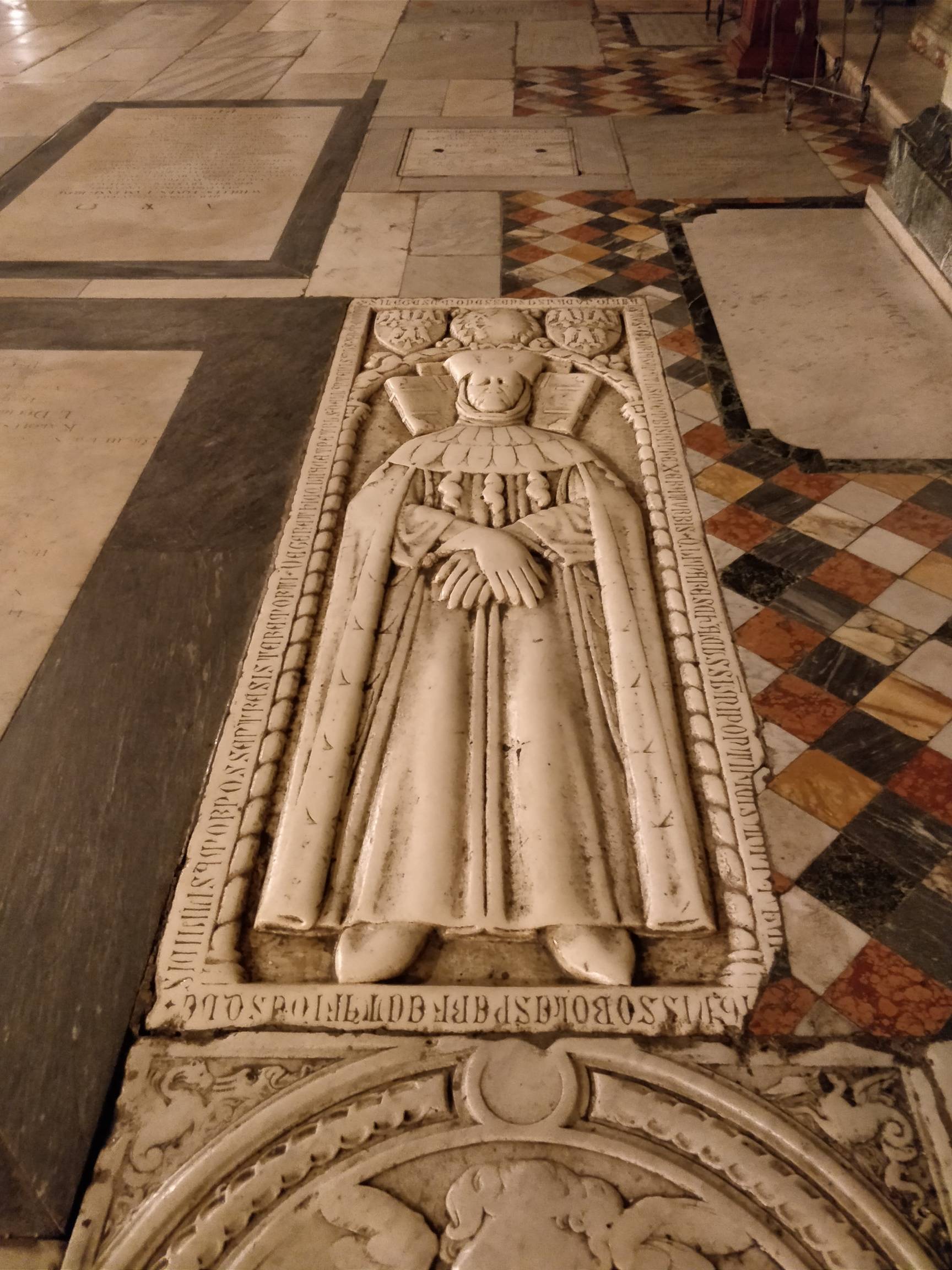 Yes, this was perfectly common. It was seen as a privilege to be buried inside the church (the closer to the altar, the better). These are not cenotaphs, these are actual tombs, with people slowly decomposing under them. Churches must have stunk horribly (possibly why a common theme in legends of saints were that their bodies did not decompose and smelled like perfume).

Anything that deals with Medieval burial customs should do. I've used Dick Harrison, Jarlens sekel (in Swedish).

Not only was this common, it was hard to change. In my country (Portugal) there was even a popular uprising in 1846 caused by, among other things, the prohibition on burials inside churches.

This is not a proper answer but it comments on various aspects (including "the why"), brings some anecdotes, and it is too long for a comment.

in English, there is even the word 'churchyard'. it means that the usual place to be buried was the yard of a church, even for the poor. Separate large cemeteries are a more recent development, when the population was larger and it become not wise to bury everyone on the churchyard due to sanitary reasons (and also land cost: churches are usually in urban areas; cemeteries may be build on the outskirts of cities on cheaper land). Brazil, in XIX century, still had a lot of churchyard burials.

About burying inside the church, It does not stink if it is done properly, and even in the middle ages they knew how to do it properly. The problem is that not everybody does it properly, and then it was necessary to disallow it as usual practice. It is obviously more expensive to do it properly, so it is another reason why richer people could be buried inside while the poor went to the churchyard.

It makes a lot of sense for small communities to pray where your older relatives are buried, or to want to be buried where you know your descendants will habitually pray. Why to be buried in a large cemetery where people will go only on the day of the dead (November 2 feast as of today calendar), when you could have your loved ones seeing your tomb and perhaps remembering to pray for you often? How will I get out of purgatory if nobody prays for me? It is amazing to me that people do not get that. when I die I really want less stupid eulogies and more praying.

Also note that only saints can be buried below the altar or in the presbytery floor. Moreover, every catholic altar has a saint relic under it, (today too, it is a requirement to consecrate an altar), even if it is a physically small one, such as a bone fragment. So, people wanted to be buried closer to saints, and tombs closer to the altar were more prestigious, even if really it is quite superstitious and being buried closer to a saint it is not different than being buried anywhere. Moreover, even if one is not superstitious, the altar is the focal point of the building. What is cooler to tell your neighbor: "grandpa is buried close to the altar" or "grandpa is buried in this shadowed corner behind the last collumn"?

It is also interesting that many European monasteries were confiscated by the state and are museums or administrative buildings today. It is hard to know if old bodies were removed or not, it is a case-by-case issue. In University of Coimbra, I used to go to the administrative office for my academic register and pay tuition every semester, and it was in a former cloister, where monk-professors from the XVIII century were buried. I have no idea if the bones are still there, but we waited in line over the tombs of old professors..

A final anecdote: Bernini, the sculptor, after having built the tombs of many cardinals, was given the option to build his own tomb, in whatever side chapel he would choose, or any legally allowed place inside the church, and his cardinal friends would pay for it. Instead of building an elaborate tomb at a side chapel, he chose to be buried right outside of the presbytery (only saints in the floor of the presbytery), on the stairs, and right on the path that the priest must walk from the sacristy to the altar. So, to this day, every time a priest says mass at the basilica, the priest walks over his tomb and see his name. If the priest wants to pray for him... Here is pic: https://www.tripadvisor.com/LocationPhotoDirectLink-g187791-d192274-i206076058-Basilica_di_Santa_Maria_Maggiore-Rome_Lazio.html

The church is considered an architectural projection of the body of Christ on the cross. Hence the church plan is often formed after the cross. Being buried in the church would be coming as close to being crucified as is possible without actually being crucified, but by metaphore. In some countries the actual crucifiction is reenacted by people who have themselves crucified temporarely. As Jesus in Christian literature rose from death, this burial inside the church is sort of mimicking by comparisson. In Dutch the words ‘rijke stinkerd (a rich person who stinks) came into use because of the not always air tight tombs giving off the smell of death. And only the rich could afford these churchyard burials. The Dutch Royal family is still ‘buried’ under the tomb of the first king in a crypt below. http://www.unofficialroyalty.com/royal-burial-sites/dutch-royal-burial-sites/ In Egypt the bodies are offered to the realm of the dead in sarcophagi (flesheaters), which resembles the altar as giving up the earthly part of the body to go forth by day as a spirit. https://en.m.wikipedia.org/wiki/Sarcophagus Interesting is that the mummy was laid in salt (natron) and the word (natron) is an analogy of the Ancient Egyptian word for ‘gods’. The ‘eating of the flesh by natron or the eating of the salted flesh by the neteru as the ultimate offer to the gods. Interesting is that the sarcophagus of the Great Pyramid is projected on the mouth in the Pyramid of Man plan by Vince Brown; www.pyramidofman.com The idea is not new. The Temple of Luxor is understood to be the Temple in Man by Schwaller; https://en.m.wikipedia.org/wiki/R._A._Schwaller_de_Lubicz

The chest of Osiris in Ancient Egypt was the seat of the spirit. It is the Djed. Djed has to do with ‘support’ and is thus related to upraised hands. Worship and offering (to the Ka). The ship in the church (nave) is literally as a ship found buried around pyramids.

Not the answer you're looking for? Browse other questions tagged catholic-church church rome or ask your own question.

14
Was the interior of Hagia Sophia in Constantinople ever covered with mosaic icons?
23
Do any churches continue to display length measures?
3
How controversial were "updates" of churches in the past?
3
Are there churches that belong to the German Armed Forces?