Who was the most recent pope to crown a king or emperor? 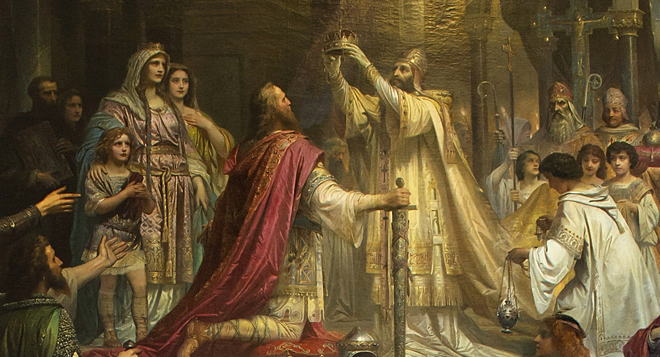 But who was the most recent pope to crown a king or emperor?

It's arguably Pius VII who crowned Napoleon I, but given the rather dodgy legality there (he put the crown on his own head) I'm going to suggest a different answer.

In 1530, Clement VII crowned Charles V the Emperor of the Germans, more correctly and misleadingly known as the Holy Roman Emperor. After that, all emperors stayed emperors-elect.

Napoleon was crowned Emperor under the auspices of the Pope (Pius VII) in 1804, about 1000 years after Charlemagne. (Actually, he placed the crown on his own head after the Pope spoke his piece.) But he wanted, and got, the legitimacy of the Catholic Church behind him.

It may be worth mentioning that the pope is himself monarch of the Vatican city / Holy See. It is one of the few remaining absolute monarchies in the world.

Paul VI was the last Pope, to date, who was crowned with the papal tiara. His successor John Paul I decided against being crowned, and so did the following ones.

9
Inquiry into the nature and roots of the temporal power of the Roman Catholic Pope:
5
What was the relationship between the Catholic Church and the Carolingian emperors?
7
Who was the first Pope?
6
When was the last time the Catholic Church excommunicated a government official for political reasons?
6
What was the most recent Catholic coronation ceremony of a king?
10
Was Leo II of Armenia poisoned?
4
Why was Polish king Sigismund II Augustus' coronation held when his father Sigismund I was still alive?
5
What authority did the Catholic Church have over European monarchs from 900–1450?
23
Who was the last European king to actively engage in combat?