This morning I found this interesting question from verified Twitter user Iyad el-Baghdadi. 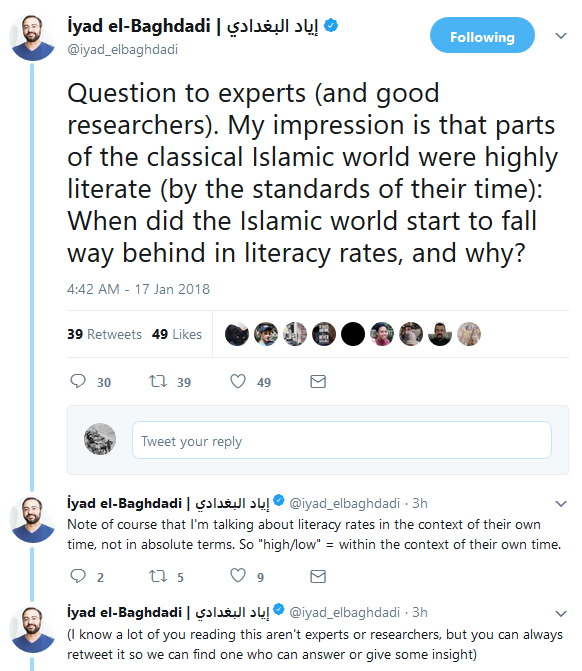 Question to experts (and good researchers). My impression is that parts of the classical Islamic world were highly literate (by the standards of their time): When did the Islamic world start to fall way behind in literacy rates, and why?

One cannot be literate without books to read, and regardless on one's religious beliefs The Bible is one of the great works of literature of Western civilization. The invention of the printing press by Gutenberg, accompanied by the widespread printing of The Bible in the vulgar tongues of Europe, would put copies of The Bible in most [Northern] European middle class homes within a century. By 1610 German publishers are printing roughly 28,000 distinct titles per decade; English printers would start to catch up about thirty years later.

Contrariwise, the Ottoman Empire forbid the use of printing presses by Muslims in its domain until the 18 century, roughly 300 years after Gutenberg.

Its tough to find good numbers on literacy going back that far. I found one set of numbers used in a couple of places that trace back to a paper from Eltjo Buringh and Jan Luiten van Zanden titled Charting the "Rise of the West", but sadly their methods only allowed for producing numbers in Medieval Christendom. Basically, they estimate it based on the production of manuscripts and some judicious application of economics and statistics.

The interesting thing though I think is the variance. They found a range of about 1-20% literacy, in general very slowly increasing, up until roughly the popularization of Printing Press (1550ish, to be specific). After that literacy shot up (although still at different rates in different countries, which they dive into in detail). 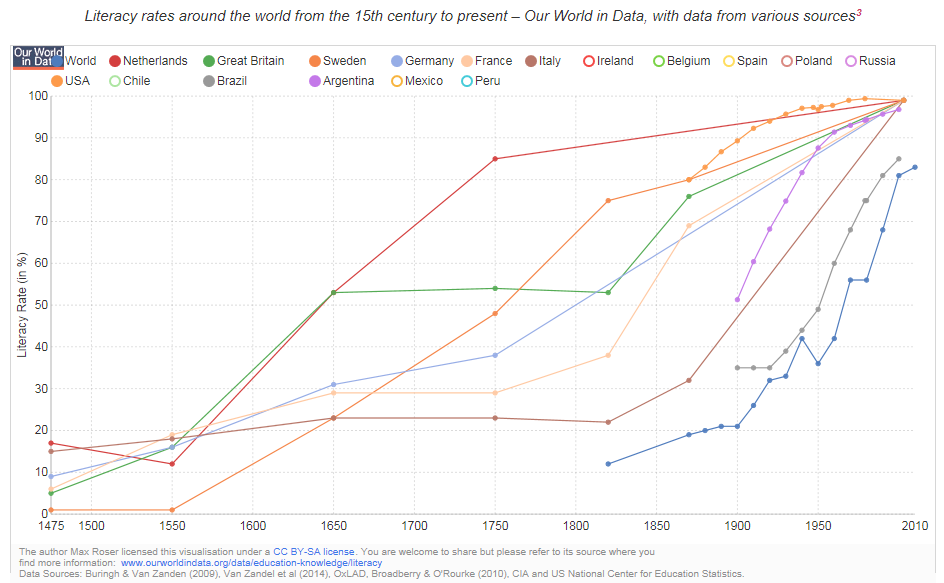 The authors use their same techniques to try to estimate literacy in China and India after they got printing presses. However they explicitly state they couldn't really do that in the Islamic World specifically due to the Ottomans outlawing printing (or even the possession of printed material!). If they could get you numbers, it seems likely they would be in the same general ballpark as they were during the manuscript era (which they were effectively still in).

So based on the this paper, and the methods they used, it is pretty much idiomatic that the Ottoman prohibition of printing is where the Islamic World's literacy rate started to get left in the dust.

The key reason is the Ottoman empire and it's policies.

Prior to the Ottoman empire, the Suljuk Sultanate (Sultanate of Rum) put tremendous stress on education. The Ince Minare Madrasa (source at bottom) was one of 24 Colleges built in the Sultanate of Rums capital of Konya and well over 50 of such structures were built Anatolia. The Sultanate of Rum was directly responsible for the height of Islamic literacy and their literacy rates far exceeding medieval Europe and quite likely even the Chinese.

However the Sultanate of Rum collapsed in the face of the Mongol invasion, becoming vassals of the Mongol empire. From these ashes rose the Ottoman empire who put almost the exact opposite stress on literacy and education.

There are a few reasons here:

1) The Supression of the Oghuz. Early Ottoman history is a long and violent struggle with the Oghuz tribes. To keep them subdued, education and literacy was withheld (and likely part of the reason of the ban of the printing press).

2) Nature of the Ottoman empire. The empire was somewhat a conglomeration of a variety of peoples and languages...Greek, Lydian, Phrygian, Cilician all fit into this empire (IE you could be a subject of this empire without really speaking the tongue of the empire). Many of these peoples were nomadic and education/literacy was an expensive prospect for little gain. I have seen the proposal floated that the Ottoman empire was actually more literate than given credit for, but these people were literate in their mother tongue and not the Turkish language.

3) Scripting (though this point is somewhat debated) wasn't easy. To make proper use of 'Ottomanish/Turkish' script, one needed to learn 2 languages to really be effective (correction in progress). The Elite would learn both Arabic and Persian, allowing them to effectively make use of their scripting, however most subjects of the Ottoman empire would only speak their mother tongue.

Edit from comments: sourcing on that can be found here https://en.wikipedia.org/wiki/Ottoman_Turkish_language "It borrows, in all aspects, extensively from Arabic and Persian, and it was written in the Ottoman Turkish alphabet. During the peak of Ottoman power, Persian and Arabic vocabulary accounted for up to 88% of its vocabulary,[3] while words of Arabic origins heavily outnumbered native Turkish words". Apparently if you didn't speak Arabic and Persian, the Turkish written language was pretty much unintelligible and a good segment of the Ottoman empire used kaba Türkçe ("raw/vulgar Turkish")

5) No stress on Education by the Ottoman empire. https://en.wikipedia.org/wiki/%C5%9Eevket_S%C3%BCreyya_Aydemir wrote in a few of his books that educational facilities in the Ottoman empire were exceedingly rare. Erdine (a major city close to Istanbul) only had one middle school and one high school to serve the entire city, and this wasn't uncommon throughout the empire.

By the time the Ottoman empire began to address this lack of education, it was already the 18th century and the majority of the world had long surpassed the Islamic world.

The key words in the question are "by the standard of the time". Indeed during the early middle age Islamic society was more literate than Western European one. Since then the literacy rates did not decline anywhere. They simply grew in the West at faster rate. It is the "standard of the time" which changed. And it changed in the West faster than it did in the Islamic countries. And the reason of this is book printing. And the wise spread of books was possible because the society was more secular.

Not the answer you're looking for? Browse other questions tagged middle-ages technology middle-east north-africa or ask your own question.

-2
at what point did Europe overtake the Arabic World and India in math and science?

17
How was Abd al-Rahman I recognized when he arrived in Islamic Hispania?
15
When did the First Barbary War start?
86
Did Bill Gates steal the GUI concept from Steve Jobs?
7
When did Sultan Saif ad-Din Qutuz escape from Mongol swords?
33
Why did the grip-centered viking shield fall out of use relative to the kite shields?
42
When did the Roman Empire fall according to contemporaries?
6
How did medieval serfs obtain their iron goods?
2
How many people did the Islamic Caliphate send to the Maghreb during the Arabization of North Africa?
3
When did blackouts occur in Cairo during WW2?