How many trucks did Russia and Germany have at the start of Barbarossa?

I've seen many times the lend-lease help cited for Russia, about 450,000 trucks (actually they were "jeeps and trucks" so it's hard to know trucks exactly). However, what I've never seen is citing how many trucks Russia already had, vs how many Germany had. Without these numbers, the lend-lease stuff cannot be compared to anything.

How many trucks did Russia have at the start of Barbarossa (1941 Jun 22)? How many did Germany have?

I googled around with various phrases, but it's hard to find something not talking about lend-lease. I did find the wiki page for Soviet automotive industry which has some things:

In 1937, the Soviet Union produced over 200,000 vehicles, mostly trucks, putting the country in second place worldwide by production of trucks.

But wikipedia contradicts itself here, because according to its chart... 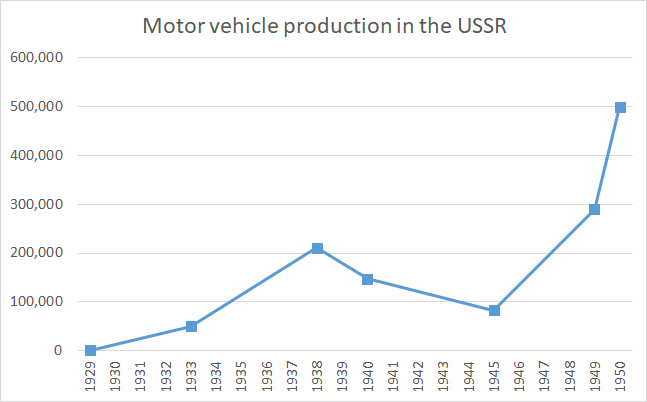 Also note that this is for all automobiles, not just trucks. It really annoys me when it says things like "cars were only a small share of all vehicles produced in the early years of Soviet production." How small is small? What is the number? How do they know it's small unless they had the actual numbers to look at and judge it small? Why would anyone then omit the numbers?

Another thing I could not find was the weight of these trucks. I seem to remember the lend-lease trucks were 2.5 tons each, but I went looking for a source and couldn't find it. How many tons were the American and Soviet and German trucks?

As for the Wermacht, all I can remember off the top of my head is that 80% of the army was horse-drawn. But that is just a relative percent and I have no way of translating it into an absolute number of trucks.

The Wermacht stuff seems to have more info, or maybe just chat, on the web. I found this website which has entries 32,558 , 53,348 , and 51,085 for 1939 to 1941 for "military trucks and lorries". So if you take half the 1941 number, it would appear that Germany had about 112,000 trucks by Barbarossa. However, this is just production for those years. It does not say how many already existed beforehand. It does not say how many were lost between 1939 and 1941. And also, I could not find any source citation on that website.

I also tried to tackle this question from another angle: How many trucks did the USSR lose in Barbarossa? That could give us an idea of how many they had. But no luck there either.

To answer your side questions about paucity of information about Soviet industry: having established a superb intelligence network in the West, USSR was understandably paranoid about the symmetric efforts and classified all information about its industry to the degree that no official numbers could ever be trusted. Combine this with приписки and you see that no one, not even Politburo, knew what was actually happening. Compound that with the obsession to downplay the impact of lend-lease and you will see why we will never know anything.

Another issue one has to be aware of is quality vs. quantity. The Lend-Lease trucks and jeeps were far better than anything the Soviet industry could produce at the time. The "workhorse" was "полуторка" - 1.5t truck based on Ford Model AA, and the Soviet Army had about 150,000 of them (and their modifications) in 1941.

When accounting for the German trucks using production numbers, one has to be aware that in 1941 the whole Europe was working for them: they were getting Renault, Citroën, and Tatras in addition to their own production.

For the Operation Barbarossa the Germans deployed 104 infantry, 19 panzer and 15 motorized infantry divisions (plus some other unidentified divisions). Nominally, this amounts to 104,100 trucks, 96,200 motorcycles and 67,240 cars. Wikipedia claims about 600,000 motor vehicles (about twice as much), which sounds reasonable - a lot of transport has to be done by non-front-line units at the corps/army level.

In the WWII, the basis of logistic (Wehrmacht and Red Army) was a horse. The infantry company (Wehrmacht / RKKA) had one wagon with one horse for supplying ammunition. At a higher level of supply (battalion, regiment, division), the Wehrmacht and the Red Army used trucks. During major offensives, the supply route stretched out up to 100 kilometers. However, for example, the Finnish army did not have many trucks. Many Finnish divisions were supplies only by horses.

In addition, the Wehrmacht at the beginning of the war had a strong transport aviation fleet. This allowed the supply of advancing units or surrounded garrisons.

The next level of supply is the railways. These are not only large echelons, but also small trains (the Wehrmacht often used captured armored cars with one railway carriage). By the way, the Finnish army had in 1939 a rocked railway to supply the Mannerheim Line.

Unlike Germany, the USSR did not have a developed industry. In fact, in the early 20s there was only 1 plant - AMO (and Yaroslavl workshops). In the 30s, Ford built a factory in the USSR. But it produced light 1.5-ton trucks GAZ-AA (FORD-AA). It was the cheapest and most produced truck. ZIS (formerly AMO) plant built the best and perfected Soviet ZIS-5 trucks. The Yaroslavl plant built small series of heavy 5 ton trucks. But they were complex, expensive. The USSR was able to create many light 1,5 and 3 ton trucks, but did not have heavy trucks and all-wheel drive trucks.

In Germany there was a developed industry. There were many firms that in the 1920s already produced 3 ton trucks. Wehrmacht had excellent heavy trucks in service. For example, the "backbone of supply" in France were 10-ton trucks. Fortunately, the USSR did not have German autobahns, thus these trucks could not be used in the USSR. It's Russia, baby!

Fuel. The Wehrmacht used excellent synthetic gasoline. The USSR had very poor gasoline for trucks. The main truck of the Wehrmacht (Opel) is simply stalled after Russian gasoline. In fact, in addition to "General Frost" and "General Dirt", the Wehrmacht fought also with "Colonel Chemical". The Opel company was forced to "modernize" the Opel to the level of the Soviet ZIS-5: simplified the design, forced the engine to eat a surrogate.

Wehrmacht had half a million cars. And these were good trucks, including off-road trucks. In 1941, 333 thousand cars were produced in Germany, 268 thousand in the occupied countries, and the satellites of the Third Reich produced 75 thousand more cars.

40% - the all-wheel drive cars. On May 1, 1945, the entire of the Armed Forces of the USSR amounted to 664.5 thousand cars, of which 100th. units were in the automobile troops, numbering by that time 35 automobile regiments, 173 separate battalions and 30 companies.

The average lift capacity of a Soviet truck was 2 tonnes, and they had very poor cross-country capability (two wheel drive), except for LL trucks which were mostly 2.5 tonne capacity with 6x4 drive.

Not the answer you're looking for? Browse other questions tagged world-war-two nazi-germany soviet-union industrial-history automobiles or ask your own question.

26
How true is the statement "Soviet troops got into Berlin riding American trucks, walking in American boots and using American trains"?
15
How dependent were the Germans on horse transport in their invasion of the Soviet Union?
10
At the start of Barbarossa, what was the state of Germany's oil supply?
10
How dependent was Nazi Germany on iron ore from Sweden?
13
Did France & Italy continue to develop and manufacture sophisticated military hardware once under German control?

22
Did American policymakers seriously consider scaling down Lend Lease Aid to the Soviet Union after the battle of Kursk?
15
How dependent were the Germans on horse transport in their invasion of the Soviet Union?
5
How many tons of steel were produced in Russia during the Russian Civil War?
10
At the start of Barbarossa, what was the state of Germany's oil supply?
19
How much materiel was shipped to Continental Europe per month, after D-Day?
27
When planning Barbarossa, did Germany conceive of the Soviet migration of heavy industry?
11
Why didn't the discrepancy in the Kursk casualty ratio work against the Soviets?
8
Did the Allies ever seriously contemplate a "Northern Intervention" in Russia during World War II?
8
What alternate north-south supply routes did the Soviet Union have when the Volga and Stalingrad were under attack?