Why was the C-pennant chosen as the flag of ships from Allied-occupied Germany?

Is there any evidence explaining why the Allies chose the C-pennant, instead of a more intuitive letter? Why not G (for Germany) or D (for Deutschland)? 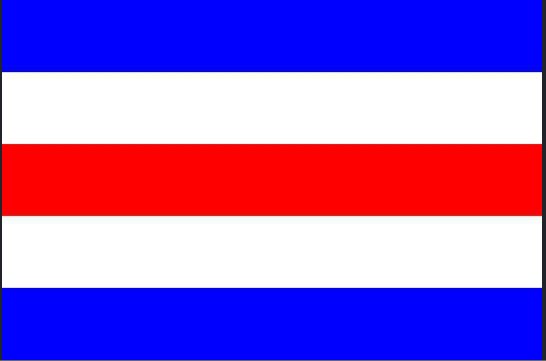 Or A for Allemagne, or S for Sachsa, or N for Německo, P for Purutia, or U for Ubudage, or T for Teutschland, or V for Vācija or F for Frángoi.... I had a look at the article Names of Germany, and 15 out of 26 letters have been the first letter of Germany's name, in some language at some point in time. That's not counting words for a German person, only the country Germany. So, it seems that it wasn't chosen for that reason... if they'd just picked a random letter there was a greater than 50% chance it would have matched up with one of those names!

Because those other pennants already had internationally recognized meanings, that would have resulted in dangerous ambiguities:

The Council ruled that "no ceremony shall be accorded this flag which shall not be dipped in salute to warships or merchant ships of any nationality".

There was very intentionally no national character to be associated with the ensign.

In particular, the A pennant already had the meaning:

I have a diver down; keep well clear at slow speed."

and the "B" pennant the meaning:

I am taking in or discharging or carrying dangerous goods.

Selecting either of these two alphabetically preceding penants would have been an absurd, bordering on insane, choice endangering lives.

In contrast the "C" pennant had the benign and innocuous meaning:

Remember Occam's Razor at all times: The most likely explanation is the simplest one consistent with all known facts.

Historical vexillologists do not know a definitive answer.

What is known is that the Allied Control Council Law No 39 from November 1946 made it mandatory to display such a c-pennant-like flag instead of a 'national flag', but not as a national flag (meaning also not at the usual position on masts etc). (Law 39 on page 166 PDF, German translation on WP: Erkennungsflagge für deutsche Handelsschiffe).

(g) Administrative Affairs. Other measures refer to administrative matters requiring uniform regulation by a central agency, such as adopting standard time throughout Germany; arranging for a population census; and certain arrangements incidental on the occupation and its technical requirements.120

As the text of this law from 1946 makes explicit (in excerpt):

There is rife speculation as to whether the meaning of "C" was meant as a constant reminder of defeat as it would stand as an abbreviation for 'C'apitulation. Certainly, this was a 'popular' German interpretation for this derogatorily called "bathing pants flag", as even the German minister for transport Seebohm (Hans-Christoph, not the Nazi-admiral Hans!) alluded to this reading in 1951 when the first black-red-gold German national flag on ships was again allowed to be flown on ships:

Everyone knows the symbolic meaning associated with this flag.
— Seebohm when on board the first ship with the new flag, MS Messina, 23 February 1951. (quoted from Biegler)

Other speculations are for example from Stödter who maintains that the letter C would also allude to prizes (meaning that it would be effective even long before the official capitulaion/surrender), as such would be the quasi-official collective status for German ships after 1945.

Biegler himself prefers – without better evidence – that it would be short for "Control", as in 'Control Council'. And that the colours present in that pennant would indeed match all 4 allies' national flags.

At least the name of the flag is also mentioned prior to Law No 39 in Directive 33 (5), August 16th, 1946 "Limitations of the Characteristics of Ships Left at the Disposal of Germany", (PDF, PDF-p72/p60)) as the 'Allied Authority Control flag'.

However, these speculations do not have any direct evidence to support them, but also a few circumstantial data points that make them less plausible.

The first would be that for Japan, three different flags were ordered in much the same manner, but obviously different from the 'German' identification flag — and without any such readily interpretable letter meaning:

The third then a modified "O" carrying "man overboard meaning" as a flag?

Why would the German version get such a 'special meaning' by intention but not the Japanese versions?

Then already on May 9th 1945 a provisional order went out that proscribed for German or ex-German ships to have the C-pennant. That order and the British practice to talk about "under allied control" and this pennant as literally the "control flag" might mean indeed that 'C'ontrol was an early meaning that for very simple and practical reasons then was solidified into Law No 39?

and in regatta sports as

"change of course in the next section"

(1) German war and merchant vessels required to operate in Allied interests with German crews are to fly at the peak International Code Flag C with a triangle cut from the fly thus transforming it into a burgee.

(2) If Allied naval officers are onboard the appropriate Allied Ensign is also to be worn superior.

(3) This arrangement is provisional.*
— quoted from Biegel

A burgee is a distinguishing flag, regardless of its shape, of a recreational boating organization. In most cases, they have the shape of a pennant.

Notice that there are exceptions to 'all vessels': for the German Mine Sweeping Administration ships flew the signals "eight" and "Nanni", ten in addition the c-pennant and after its dissolution the CCG-flag. The successor organisation "Labor Unit B" were all German manned but flew the Star & Stripes… Ships on Soviet controlled territory a simple red 'worker's' flag. The order to hoist the "eight" signal-pennant was actually the last flag order of the Reishkriegsmarine issued by Dönitz on May 16 1945 (B.Nr .1.Skl. I i1212/45 PDF) (Incidentally, many captains also flew the signal "Q", without orders to do so. Which some say was a sign of protest over the 'no-flag' situation, as that should stand for Quatsch German für 'bullshit'. Nanni and Q were often confused.) It is remarkable that this last act of the Reichsregierung survived as a practical solution.

The German national version signal flag for "Nanny" or "Northpole" (and "8", "Q") looked like this:

And a comparison of 'flags' from Biegler: 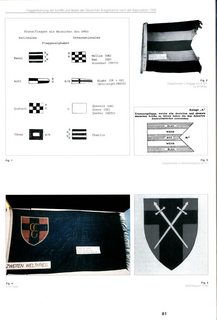 The most important thing to observe might be the simple fact that neither Germany nor Japan were allowed to display any form of true national flag in that period. So my own speculation here is that any non-national flag would have made sense and fulfilled the purpose. Unless a British Navy internal for this rationale is dug up: the actual choice made in Law No 39 looks much like mere contingency based on prior art.

The by order of the allies since 1945 by german ships to use flag is corresponding to the flag C of the signal-flag-alphabet. Behind this conceals the humiliating intention to let ride german ships on the oceans only with the letter C, standing for Capitulation. Costa Rica made an appeal against this practice, because it is self using such a flag as national flag. In this way they have the c-flag rectangular carved on the flying end. With the founding of the FRG and the GDR, this practice was eliminated.

"Germany will not be occupied for the purpose of liberation but as a defeated enemy nation."

Not the answer you're looking for? Browse other questions tagged germany ships flags or ask your own question.

34
Why did Italy abandon its alliance with Germany in WW1 and join the Allied side?
15
Why did Kabila discard the name and flag of Zaire?
6
Tricolore: Why have the colors been chosen that way?
51
If the Union Jack joins the flag of England and Scotland, why does it have a different shade of blue than the Scottish flag?
20
Was mortality higher on French slave ships and if so, why?
1
Why does the Puerto Rican flag look so much like the one of the U.S.A.?
13
Was the flag of Iceland originally fimbriated in silver?
3
What was the route for ships from England to South Africa in 1840?
11
Why was the Ottoman flag changed from an eight-pointed star to five-pointed in the 19th century?