How much materiel was shipped to Continental Europe per month, after D-Day?

Once D-Day landed (1944 Jun 06), how much materiel was shipped into Continental Europe by the Western Allies per month? Did this monthly figure change much by 1945 May?

Note, I'll accept an answer for just the materiel that came through France, just through Italy, or a total figure for both, as long as it's specified which is which. I'm not interested in the lend-lease materiel that went to Russia because I already have those figures. I want just the Western Allied imports after D-Day, to compare it to lend-lease Russian stuff.

In the second volume of his series Logistical Support of the Armies, Roland Ruppenthal provides a table of materials shipped into Europe from June 1944 to April 1945, broken down by port (including the beach supply at Omaha Beach and Utah Beach which is often omitted from other works): 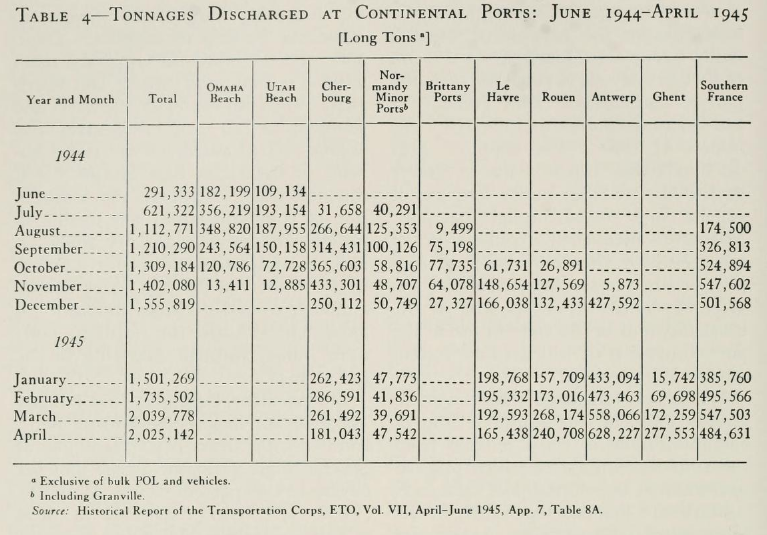 There is further detail about the minor ports in a further table, although it doesn't provide a monthly breakdown:

If you are interested, he provides a more detailed breakdown of the early phase of the beach supply (from 6-30 June 1944) in the first volume of the series: 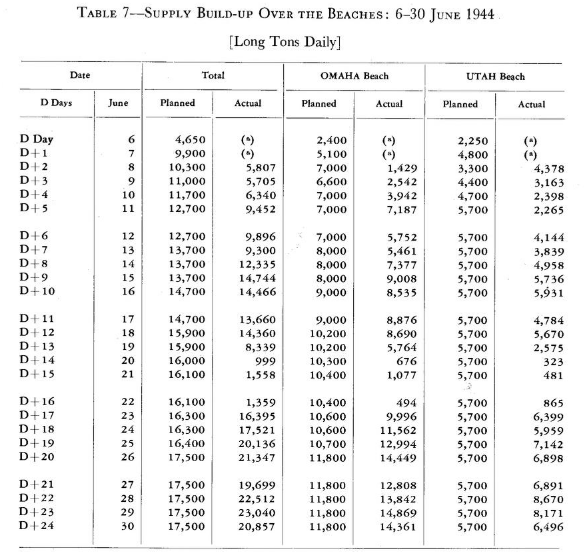 You'll have noticed that the data is provided:

Although these are discussed in the text, Ruppenthal doesn't provide the information in a readily accessible, tabular format. Fortunately, further detail on POL (Petrol, Oil & Lubricants) and vehicles discharged to the European theatre are to be found in the charts attached as appendices to The Operation, Organization, Supply, and Services of the Transportation Corps in the European Theater of Operations which is available online as a pdf document for download. The following charts are taken from that document: 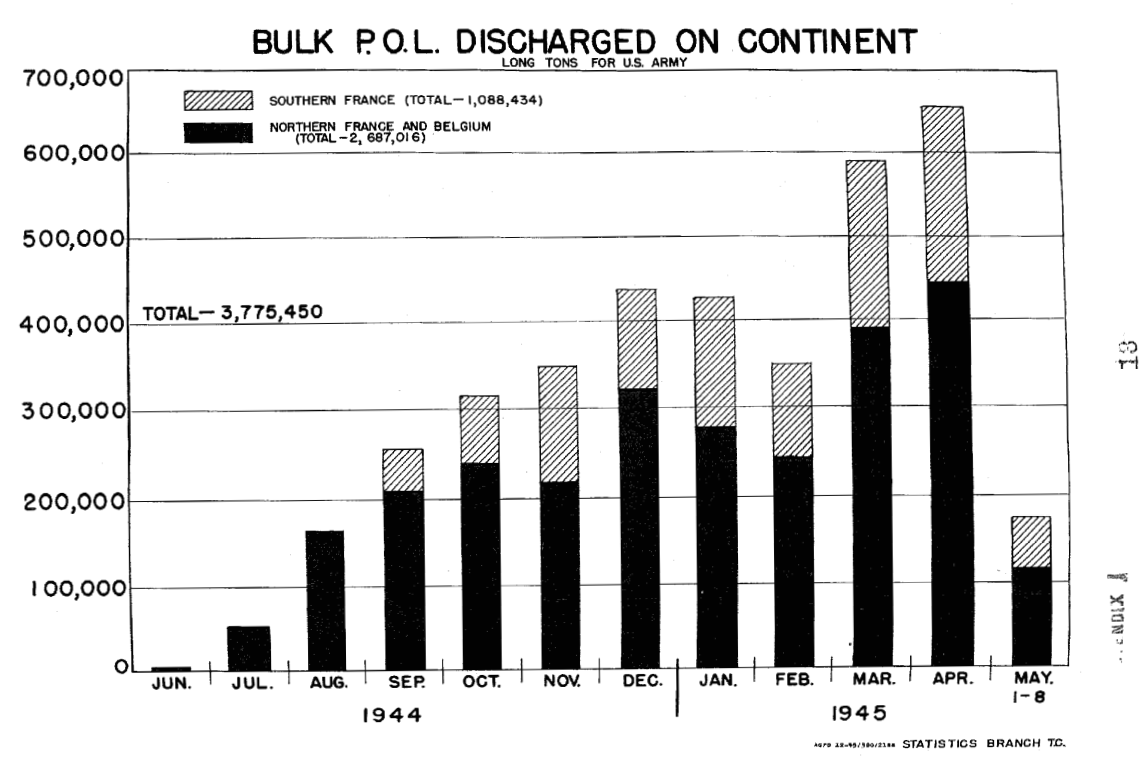 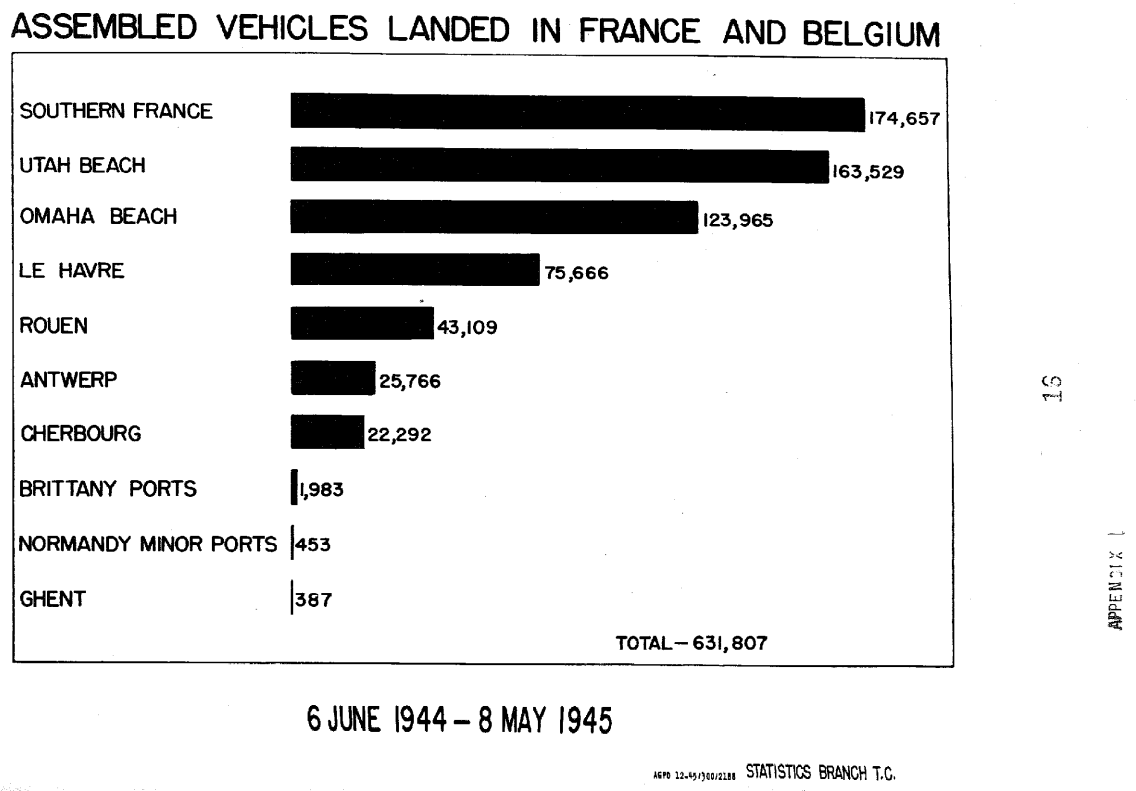 Unfortunately there doesn't seem to be a monthly breakdown for the vehicles landed.

This document also has some information about daily consumption rates during the latter stages of the war in Europe which you might find of interest.

The British Mulberry Harbour, Mulberry B (a.k.a "Port Churchill") at Arromanches-les-Bains continued to operate until 19 November 1944. This operated in addition to the figures mentioned in the US Report above, and achieved a daily discharge rate of up to 12,000 tons (corresponding to a monthly rate of about 350,000 tons) over that period. This was broadly comparable with the figures achieved by the harbour at Omaha Beach.

One further source that has interesting source material and analysis that you might find useful is Lt. Col. John Larkins' An Historical Analysis of Port & Beach Operations in the European Theatre of Operations WW2, published by the US Army War College in 1983. Of particular interest is the discussion of the challenges experienced in opening the Channel ports to Allied re-supply operations.

Prior to the opening of Antwerp in Late November, 1944, the Allies were receiving the following weekly (pp 21), through Cherbourg, Le Havre, Rouen and Ghent; the surviving Mulberry; and Marseille:

On a monthly basis these figures become roughly the following:

Prior to the clearing of Cherbourg Harbour in August, 1944, these figures would have been substantially less.

In the immediate aftermath of Antwerp's opening another 10,000 tons of supplies were off-loaded in just 3 days, setting a minimum for the monthly capacity of that port at around 100,000 tons. I suspect the actual capacity was far larger.

11
How besieged was Leningrad after Operation Iskra?
15
How much oil was spilled by the naval combatants during WW2?
13
How successful were Einsatzkommando Tunis and how much was Rommel complicit?
11
How many trucks did Russia and Germany have at the start of Barbarossa?
5
In early WW2, how much of the merchant marine was American?
2
Which part of Japanese air forces fought in Burma and how much was destroyed?