I believe that the title explains the question quite well however I will elaborate.

We know that soldiers, even conscripted ones were indeed paid during their service in the two different armies. However, is there any difference to how they were paid? Was one paid better than the other?

I have fumbled through many archives and googled the question phrased in many different ways to no avail.

Sources would help greatly, thanks.

This article discusses several aspects of life in the CEF, including pay scales in effect: 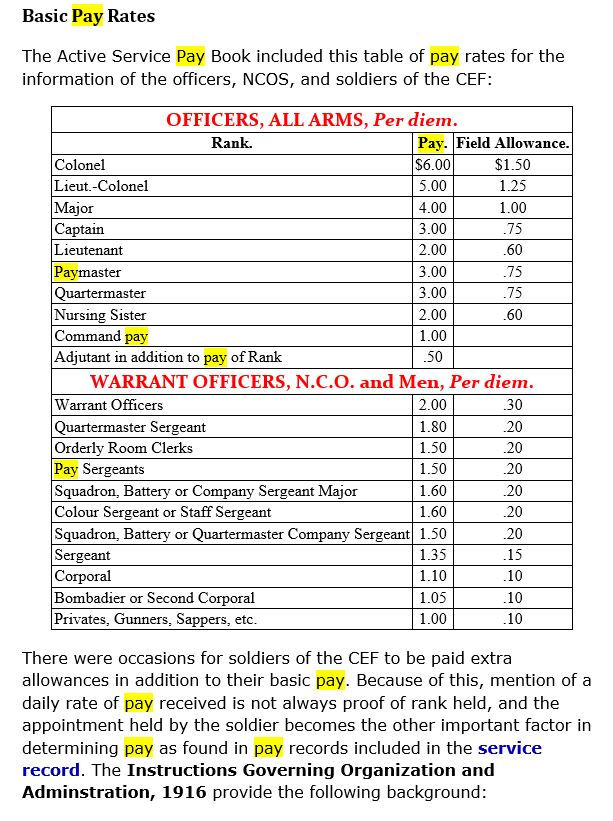 which should allow meaningful comparison to British pay rates once they have been tracked down.

War Office Instruction 166 (1914) detailed the rates of pay for all ranks in the various arms of the British Armed Forces as of 1914.

I've listed the pay scales covering infantry only, but even within this limitation, you'll notice that Foot Guards were paid more than Line Infantry.

I have been able to do some verification on these figures as they appear on several websites (Such as Tommy1418 and "Innovating in Combat") but I've not been able to find a digital image/copy of War Office Instruction 166 (1914) yet to fully check the figures.

Not the answer you're looking for? Browse other questions tagged world-war-one britain canada or ask your own question.

6
What was the alcoholic beverage of choice for British soldiers during WW2?
2
Were non German soldiers treated differently than German soldiers in the German army during the Great War?
10
How did the British Army unit size and structure in WWI change from 1915 to 1918?
4
What were British voting qualifications in the 1770's?
2
What portion of the finance industry was British prior to WWI?
40
In the “Christmas truce” of 1914 were there any football (soccer) matches between British and German troops?
38
Why did the German army execute so few soldiers in World War I compared to most other armies?
9
Can anyone point me to an online version of the 1900 amendment to the Franco-Russian Military Convention 1892?