Has a hostile submarine transitted the Bosphorus submerged?

In WW1, the British submarine E-11 entered the Golden Horn, but apparently not the Bosphorus, and in this old thread on Usenet there are references to WW1 and fiction.

According to a recent article in World Neurosurgery, the American submarine Robert E. Lee passed through the Bosphorus submerged in 1969:

patrols based out of Holy Loch, Scotland, that involved clandestine courses that required passage through the Straits of Gibraltar, Mediterranean Sea, Dardanelles, and Bosphorus. Each of these accomplishments was achieved submerged [...] The Bosphorus passage was particularly treacherous and irregular, with complex positioning and course changes that were affected by currents and the presence of Soviet submarine traffic and planned impediments. 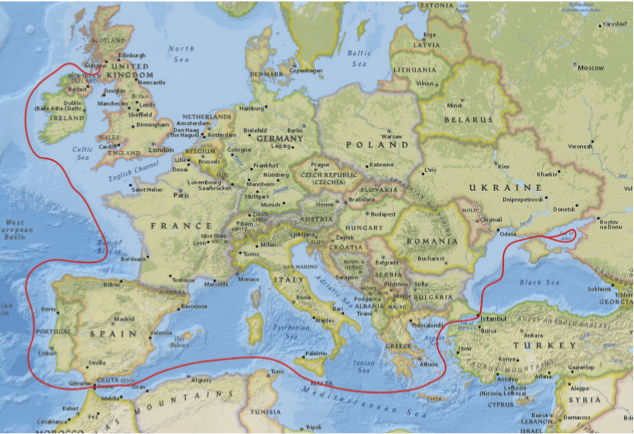 (We ignore that the map shows a route straight through Perekop isthmus. The Bosphorus is what interests us here.)

The reference to "Soviet submarine traffic" seems to suggest this was not regulated traffic. The Montreux convention says that "submarines must travel by day and on the surface". On the other hand, surely NATO/Turkey would have been able to detect submarines in the Bosphorus in 1969?

Am not sure it would have been practical to do it with the technology available in WW 1/2.

So the question is: are there any records of any submarines not friendly to Turkey passing through the Bosphorus submerged?

According to Halpern, The Mediterranean Fleet, 1919–1929, p. 96, the British submarine HMS E46 made a passage in 1919 at periscope depth (or slightly above), and concluded submerged transit undetected would not be possible/practical. 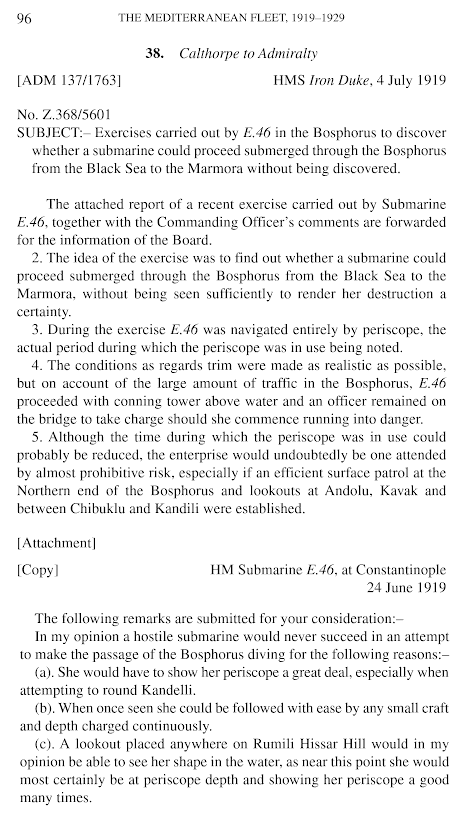 Addition, context: in 1919 Istanbul was occupied by the WWI victors, so this does not really count as a "hostile" passage.

Not the answer you're looking for? Browse other questions tagged naval cold-war or ask your own question.

19
Are there any records that indicate a submarine vs submarine battle?
30
Did the U.S. and Soviet Union have a submarine battle in 1968?
10
In WW2, which midget submarine program was the most successful?
12
Are submarine launched ballistic missiles still inaccurate?
2
Was there hostile contact between deployed US forces and Sandinista forces during Operation Golden Pheasant?
2
Were US Navy WWII-era submarine crewmen allowed on deck?
9
Would a WW2 submarine have any way to fake death, how, and would it be useful?