Identify the caricatured countries in an illustration about the XYZ affair

I've been reading about the XYZ affair and I've found this cartoon, in which a woman representing America is stripped by a group of Frenchmen in the presence of John Bull and other anthropomorphic countries. 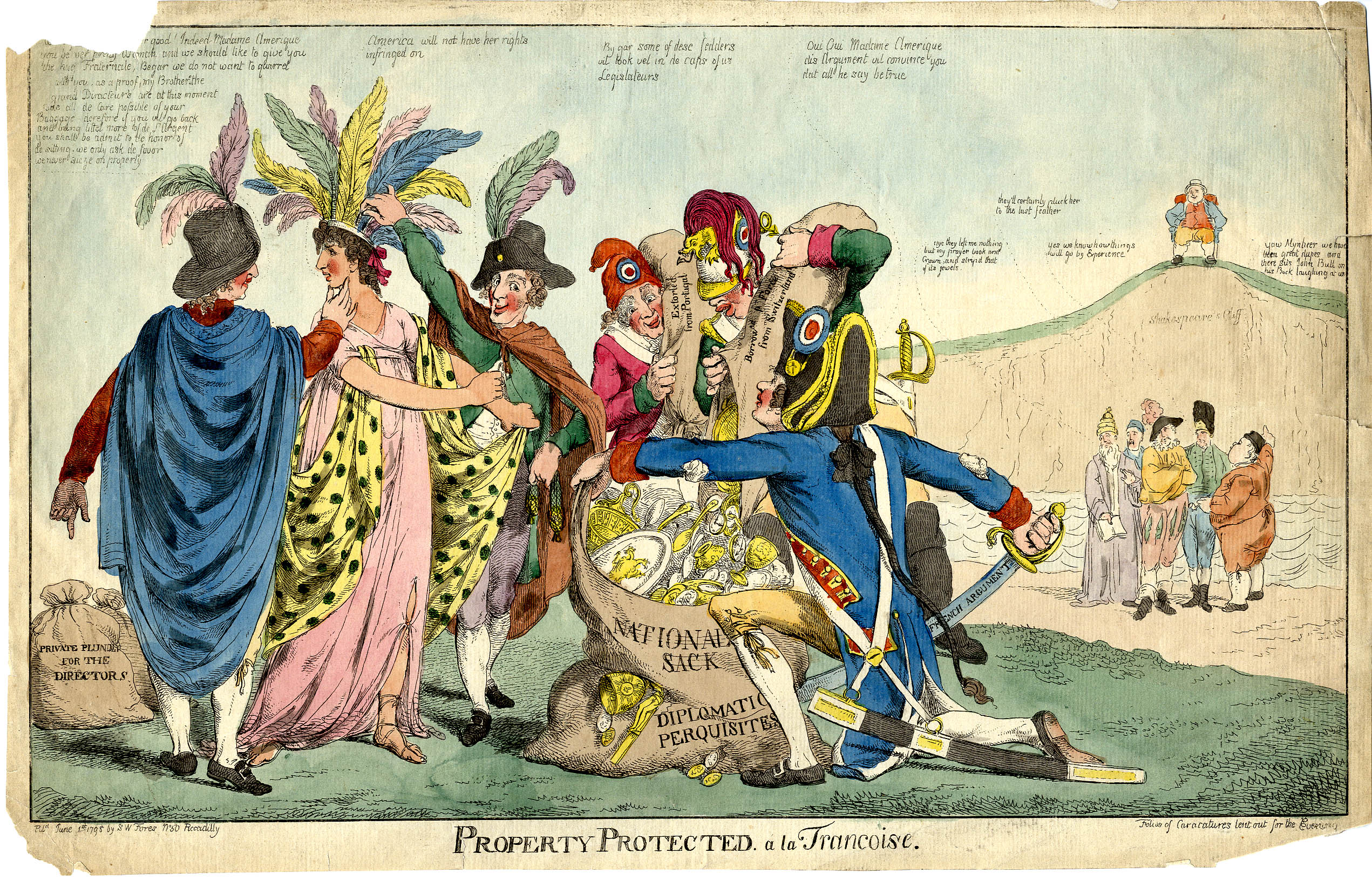 First Directeur: We infringe-Dat be ver good! Indeed Madame Amerique you be ver pretty WOMAN and we should like to give you the hug Fraternale, Begar we do not want to quarrel with you, as a proof, my Brother the grand Directeur's are at this moment take all de care possible of your Baggage-derefore if you will go back and bring a little more of de l'Argent you shall be admit to de honor of de swing, we only ask de favor we never seize on properly [points to sack labeled PRIVATE PLUNDER FOR THE DIRECTORS]

America: America will not have her rights infringed on.

Second Directeur: By gar some of dese fedders vil look vel in de caps of us Legislateurs.

Third and Fourth Directeurs pour plunder from bags marked EXTORTED FROM PORTUGAL and Borrow'd by Force from Switzerland into a bag marked NATIONAL SACK DIPLOMATIC PERQUISITES.

First European: aye they left me nothing but my prayer book and Crown, and striped that of its jewels.

Second European: they'll certainly pluck her to the last feather.

Third European: Yes we know how things will go by Experience.

Fourth European: yaw Mynheer we have been great dupes and there sits John Bull on his Rock laughing at us.

I can assume some of the countries represented. For example, in the late eighteenth century it was a popular stereotype in England that the Dutch had fat asses, so the figure of brown clothes on the right must be the Netherlands.

Would you help me to identify the other countries in that group? Thanks in advance.

The description of the print on the British Museum site includes the following explanation of that part of the picture:

The scene is on the coast near the Channel. Across the water is 'Shakespeare's Cliff', rising in a curve to a mound on which sits in a chair a fat John Bull laughing at the spoliation.

In the middle distance, by the French shore, is a group of five: a Spanish don in cloak and slashed breeches says: "they'll certainly pluck her to the last feather". Next him (left) stands the Pope wearing his tiara and holding an open book; he says: "aye they left me nothing but my prayer book and Crown, and stripd that of its jewels". A fat Dutchman (right), pointing across the water, says: "Yaw Mynheer we have been great dupes and there sits John Bull on his Rock laughing at us". Next is an Austrian hussar, saying, "yes we know how things will go by Experience". The fifth, behind the others, may be a Swiss.

It notes that the picture is a Hand-coloured etching dated 1 June 1798.

Not the answer you're looking for? Browse other questions tagged united-states france 18th-century piracy or ask your own question.

4
Who was the noble present at the Tennis Court Oath?
3
What did the founding fathers of America think about immigration?
12
Why was there no concerted effort to end the Barbary pirate raids until the 1800's?
9
Why are the "Three Musketeers" called musketeers?
9
Why was immigration from France to the United States lower than from some other countries?
1
Was the internment of Japanese Americans in WWII a public affair?
5
Does somebody know anything about the original "Tour de Croy" tower?
4
Can anyone help identify this French military uniform?
1
Can anyone identify these uniforms?