Why was the standoff on the Ugra river the end of the Tatar-Mongol yoke in Russia?

This is a very layman question, since my only source of knowledge is Wikipedia. I'm sure there are works that cover this subject in more details, please mentioned them in your answer.

The Great stand on the Ugra river marks the end of the Tatar-Mongol yoke in Russia.

On October 28 [1480], Ivan gradually started to pull his armies back to Kremenets for winter quarters. Akhmat waited for reinforcements until November 11 and then turned south. Among other reasons for Akhmat's retreat was the possible threat of Crimean, Nogai or other attacks on his unprotected home base, a common problem in nomadic warfare. As Nikolai Karamzin wrote in his "History of Russian State", "It should have been an odd image: two armies ran away from each other, not pursued by anyone".

So Akhmat retreated alright, but that also was the end of the yoke for some reason. How did that happen and why?

It's precisely because Akhmat Khan retreated.

The Mongolian yoke over Russia was underpinned by their ability to compel obedience (i.e. tribute) through the force of arms. Akhmat Khan's retreat destroyed the credibility of this threat. Regardless of the actual circumstances, the fact that the Russians defied him and successfully withstood his retaliation, demonstrated the Horde no longer had the military strength to keep Russia subjugated.

So technically, the retreat wasn't the end of the yoke; that happened a few years earlier, when Ivan III stopped making tribute payments and repudiated Mongol authority. But the retreat confirmed it.

Of course, this wasn't a sudden shift. Muscovy had been gaining strength while the Horde slowly declined for over a century. As early as 1378, Dmitry ceased making regular tribute payments and fought off the Golden Horde's armies, though he submitted again in 1382. By 1480 Ivan III had consolidated most of Russia under his rule, while the Golden Horde had conversely fragmented into several successor states.

That said, 1480 does represent the last attempt by the Horde to re-assert its dominance over Russia. Accordingly, its dramatic failure is traditionally held to be the definitive end to the Tartar-Mongol yoke. Akhmat Khan's own death soon afterwards, as well as the Great Horde's destruction, sealed the deal.

[I]n practice, the rulers of Moscow had long since stopped regular payments of tribute, preferring to keep the revenue in their own treasury. Ahmed's demands that Ivan III recognize his suzerainty and resume tribute payments were echoes of an era long since past. The 'stand on the Ugra' did not end the 'Tatar yoke' because, under less dramatic circumstances, it had ended decades earlier. At the same time, even the most sceptical of scholars recognize that the events of 1480 soon assumed great symbolic significance. In the minds of later Russian writers, the failure of Ahmed's campaign showed unmistakably that Muscovy's ruler had become a fully independent sovereign.

Its fairly simple: There was an arrangement where the Russian Rulers were paying tribute to the Golden Horde since the days of Genghis Khan. This is the international equivalent of "protection money". Either pay them the money, or they'd come raid your territory and take whatever they want (probably quite destructively).

In order to get money from someone that way, a raid from them has to be a credible threat. Ivan III decided perhaps it wasn't, and mustered an army to face the Tartars when they came to collect.

Since the Tartars didn't even want to fight his army, that was tacit admission that they couldn't force him to pay. Thus no more tribute.

I think tribute was just one aspect of Mongols ( Tatars) domination. Another one was associated with "jarlig"(ярлык), Great Khan would bestow his blessing in a form of "jarlig" to one of the Russian princes, thus making him an overseer of other princes and their senior. The privilege meant that its holder collected tribute on behalf of the Khan before sending to Mongols. It also entailed right to ask for military help against the unruly vassals and enemies.

The maneuvering surrounding the renewal of Jarlig was cutthroat game of political survival with intrigues dwarfing what was happening on the court of Borgia. The constant infighting for this privilege (renewable with every death of a Khan as well as a prince holding it) secured the Horde domination over vassal states very effectively. Having said that, I am not sure when was the last of these privileges bestowed on Moscow-Suzdal Prince. I would consider it an important act of Moscow emancipation.

It is possible that the Tatar Yoke did not finally end for two centuries after the standoff on the Ungra River, gradually becoming weaker and weaker. And one could claim metaphorically that the Tartar Yoke continued until the February 1917 revolution, now being enforced by Russian rulers to benefit themselves.

The reasons given by Semaphore and T.E.D. for considering the standoff on the Ungra River the end of the Tartar Yoke are strong.

Another reason for claiming that is Russian nationalistic pride. Proud Russians would like to claim that that Tartar Yoke was lifted as soon as possible, regardless of historical accuracy. Thus one may wonder whether the standoff on the Ungra River really was the end of the Tartar Yoke or if Russian historians jump the gun claiming that it was.

I note that Alatoo's deleted answer says: the Tatars ran away and Russians just left after the Tatar threat was gone.

On October 28, Ivan gradually started to pull his armies back to Kremenets for winter quarters. Akhmat waited for reinforcements until November 11 and then turned south.1

Thus it seems that Ivan had to retreat from the oncoming winter weather 14 days before Akhamt retreated to his homeland. Thus Alatoo seems to have have reversed the order of retreat, perhaps out of Russian nationalism.

In nationalist history, the Ugra Standoff is taken as the end of the so-called "Tatar Yoke". Modern writers are more skeptical and see it as an important landmark in the gradual expansion of Russia and the gradual decline of the Mongol empire.

Thus the Tatar control of Russia may have become slighter and slighter, weaker and weaker, over several centuries before and after the Stadoff and the Ugra River.

I believe that the Tatars sometimes demanded tribute and other facets of over lordship from the Russians after the Standoff on the Ungra, and that they sometimes succeeded in their demands. In 1571 the crimean Tartars burned Moscow except from the Kremlin, and it was said that only 30,000 survived out of a population of 200,000, and made and unsuccessful attack in 1591.

Since the Russians didn't always have the military advantage, they may have sometimes agreed to pay tribute to Crimea.

The treaty of Constantinople in 1700 ending the Russian-Turkish War of 1686-1700 included a clause abolishing the annual tribe from Russia to the Crimean Khanate.

The Treaty of Constantinople (1700)brought a formal end to the annual tribute delivered to the Khan, rather grudgingly, by the tsars, and in 1768 Crimean horsemen conducted their last slave raid into Russian territory.

1700 Peace of Constantinople. Russia retains Azov and Taganrog. The Russian Tribute to the Crimean Khanate is abolished.

In addition, the Turks repudiated the Crimean khan's claim to an annual tribute, so much resented by the tsars: it had not been paid since 1683 and by 1700 the arrears amounted to perhaps a twelfth of Peters revenue in that year.

So the New Cambridge Modern History Volume 6, page 627, claims that a tribute to the Tatars was last paid in 1683, 203 years after the standoff on the Ungra River. The source is given as Sumner, page 77n.

Thus I suspect that Muslim or Turkish historians may often claim that Russia was legally a tributary of the Crimean Khanate - which was a vassal of the Ottoman Empire - on and off until 1700, 220 years after the standoff on the Ungra River.

I guess that some historians could claim metaphorically that the Tartar Yoke was not lifted until the February Revolution in 1917, soon to be replaced by the Communist Yoke in the October Revolution.

The Princes of Moscow became the Grand Princes and Tax collectors for the Golden Horde. And they used that position to tyrannically usurp more and more power from the other princes of Russia. Thus they may have dragged their feet in revolting against the Mongols and used the Mongol threat to justify collecting taxes (to keep the Mongols from devastating Russia) until their control of Russia was strong enough that they could keep on collecting taxes and oppressing Russians without Mongol backup support. Thus after revolting from the Tartars the Russian grand princes and Tsars continued the Tartar yoke and oppression even after gaining independence from the Tartars. Thus one could say the Tarter Yoke continued, now being imposed by Russian rulers.

My research ended with the Mongols. The subsequent period on the steppe was one of decline and marginalization. If I had to connect the standoff to a specific event, it was probably the conquest of Crimea by the Ottomans in 1475. After this point, the Ottomans were able to extend their influence into this region. A major event on the Russian side was the annexation of Novgorod to the Muscovy, in 1478. The Russians gained an important port in the Baltic Sea, while the Horde had lost its access to the Black Sea. The fall of Constantinople was also a major factor in the fragmentation of the Turks. Constantinople had an intimate relationship with the Pontic Steppe, for protection and commerce, ever since its commercial treaty with the Gokturks in 568.

Crimea broke off of the Golden Horde after civil wars from 1420-1449, during which the rebel Khan was supported by Lithuania. The rebels created the Crimean Khanate in the Peninsula, and continued to be hostile to the Horde. This fragmented the Horde, and caused it to lose its most lucrative region.

The Ottomans conquered Crimea in 1475. They took the Khan in Crimea back to Constantinople for three years. In 1478 he was returned and agreed to rule as a vassal. The vassalship was more of an alliance until 1524, after which all Khans were appointed by the Ottomans. This alliance with the Ottoman Empire gave the Crimeans the upper hand against the horde, which they conquered in 1502.

Crimea was an important region in which two regional powers, first Lithuania, then the Ottomans, had intervened to undermine the Horde. The Crimean Khanate was an Ottoman vassal continuously until 1774.

Here is a picture of Poland and Lithuania after the union in 1401. The Crimean Khanate is to the southeast. 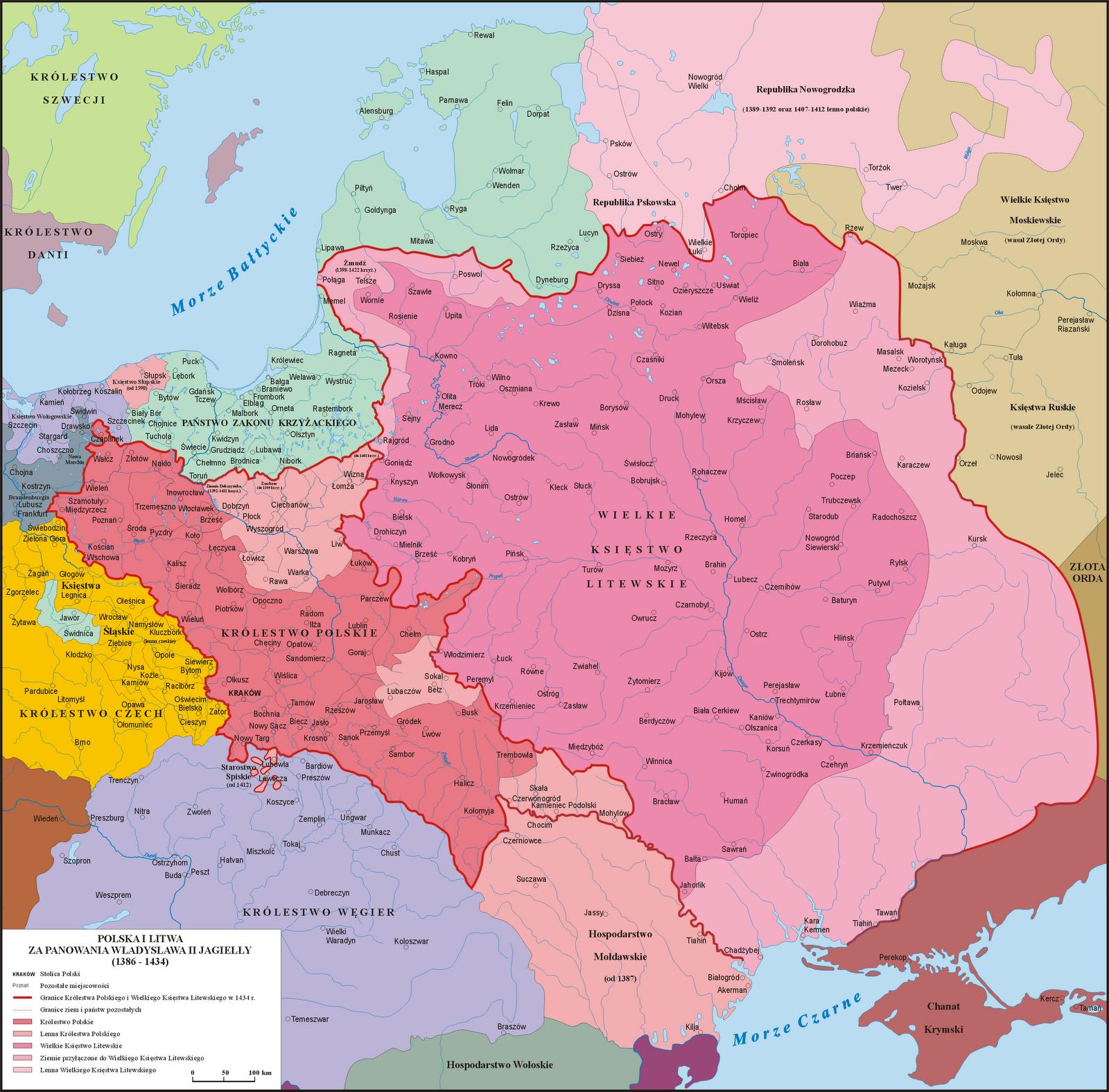 Not the answer you're looking for? Browse other questions tagged russia mongol-empire 15th-century or ask your own question.