Can anyone find a picture of NSDAP & KPD Workers eating lunch together in 1932 during Berlin Transit Workers Strike?

A few months back I saw a picture on the web of NSDAP and KPD strikers eating lunch together during the November, 1932, Berlin Transit Workers strike. The picture showed strikers of both parties around an outdoor table (like a picnic table) in party uniforms,

The strike was organized by the NSDAP to steal working-class votes from the KPD - which it successfully accomplished the following year. The KPD was unable to oppose this move without (presumably) alienating even more of its supporters.

Does anyone know of a link to this photograph?

I would also be interested in a picture clearly showing members of the two parties picketing together, though I don't know that any exist.

The two sub-organisations calling for that 1932 Berlin transport strike were the NSBO (Nationalsozialistische Betriebszellenorganisation) for the Nazis and the RGO (Revolutionäre Gewerkschafts-Opposition) for the KPD. But the RGO started the strike and then the nazis quickly joined in. The RGO welcomed that move as in her eyes this was an imminent precursor to the envisioned revolutionary situation and demonstrated primarily that nazi-workers were workers after all making the RGO or KPD their 'natural' representatives. The overall common interest was bringing down the bourgeois republic and diminish the regime-supporting, law-and-order social democratic party even further. But only the KPD really aimed for an overthrow while the nazis still largely followed their legal overtaking strategy, now joining the strike only in fear of loosing support among the workers.

A website belonging to the current social democratic party (SPD) has a picture on which, allegedly, the two fronts are picketing together: 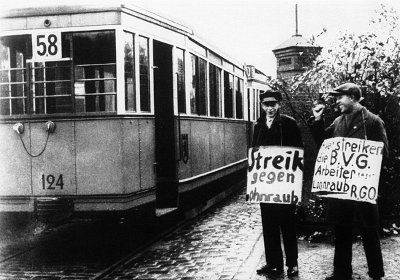 Caption under that picture reads:

This is also found on Trotz Notverordnungen Und Massiver Arbeitslosigkeit – Zurückhaltung bis zum bitteren Ende, a history of trade unions site, in a much larger version: 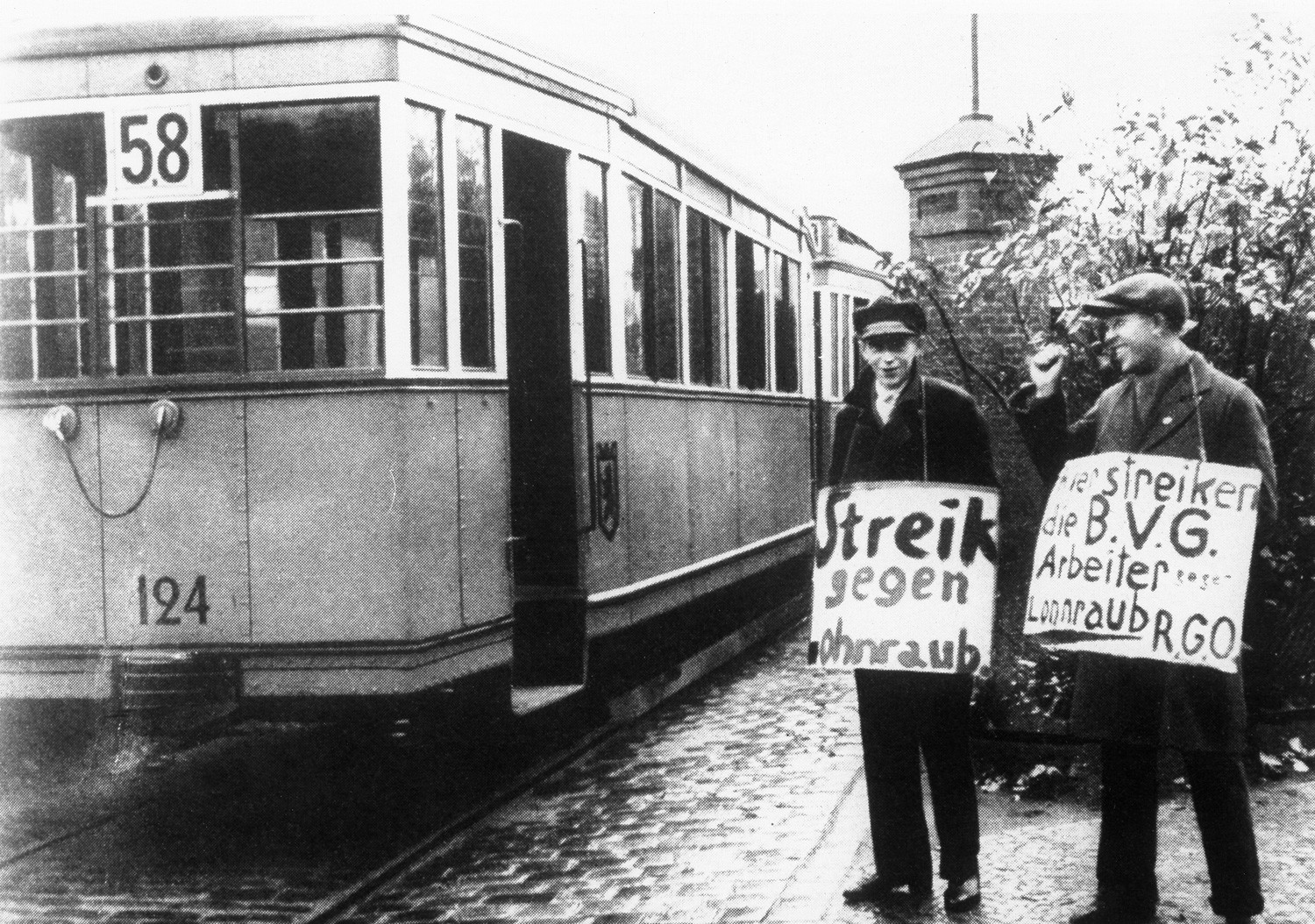 Not the lunch picture, but one demonstrating that this spirit of cooperation was not done for the first time: in a print magazine called Der Spiegel a nice picture is found showing Walter Ulbricht and Joseph Goebbels on a shared debate platform (1931): 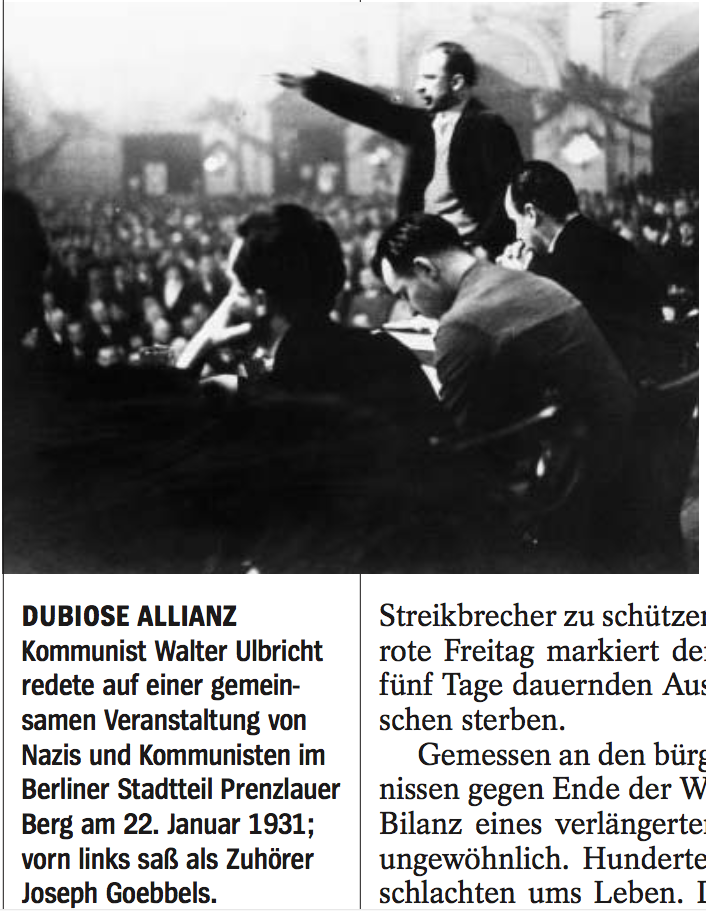 Apparently, the caption used in Der Spiegel is a bit misleading. (Translation: "Dubious Alliance Communist Walter Ulbricht was speaking at a joint meeting of nazis and communists in Berlin's district of Prenzlauer Berg on January 22, 1931; at the front left sat listener Joseph Goebbels") –– Although Ulbricht and Goebbels were indeed the masterminds for the transport strike in 1932 and the cooperation of the two organisations in it, as evidenced for example from the other links above. The picture above however seems to show a public debate (and in a hall in Berlin/Friedrichshain, not Prenzlauer Berg) hold by the NSDAP. There they invited the KPD to jointly address the question "Soviet-Germany or Third Reich?".

Goebbels started the duel in front of 4000 attendees. After Ulbricht spoke in turn the atmosphere had already deteriorated so much that in the ensuing Saalschlacht (big brawl, indoor battle) 100 people got injured, 12 of them seriously. Afterwards Ulbricht claimed a rhetorical victory… not only for obviously superior arguments but nonetheless and not in the least since Goebbels was considered such a weakly voiced speaker. Naturally the Nazis claimed the exact opposite. Both sides were very pleased with the sensational headlines the brawl brought about. Exact details of the event are very colourful and conflicting.

Despite the fact that the co-operation during the BVG strike was not a matter of "hand in hand", but rather a matter of "shoulder against shoulder", it cannot be denied that both parties swapped their political interests for economic interests - both longed to change the conditions they lived under. During rallies, gatherings and protests there were clashes of violence between communists and national socialists, but on many occasions they also supported each other because they lived in the same neighborhoods and knew each other pretty well. This took shape in common actions against evictions, rent increase and so on. One must not look in black and white shades if it comes to the relations between communists and national socialists in the Weimar era.

Close quarter neighbourhoods, full of communists and nazis living and letting live is exemplified in this picture: 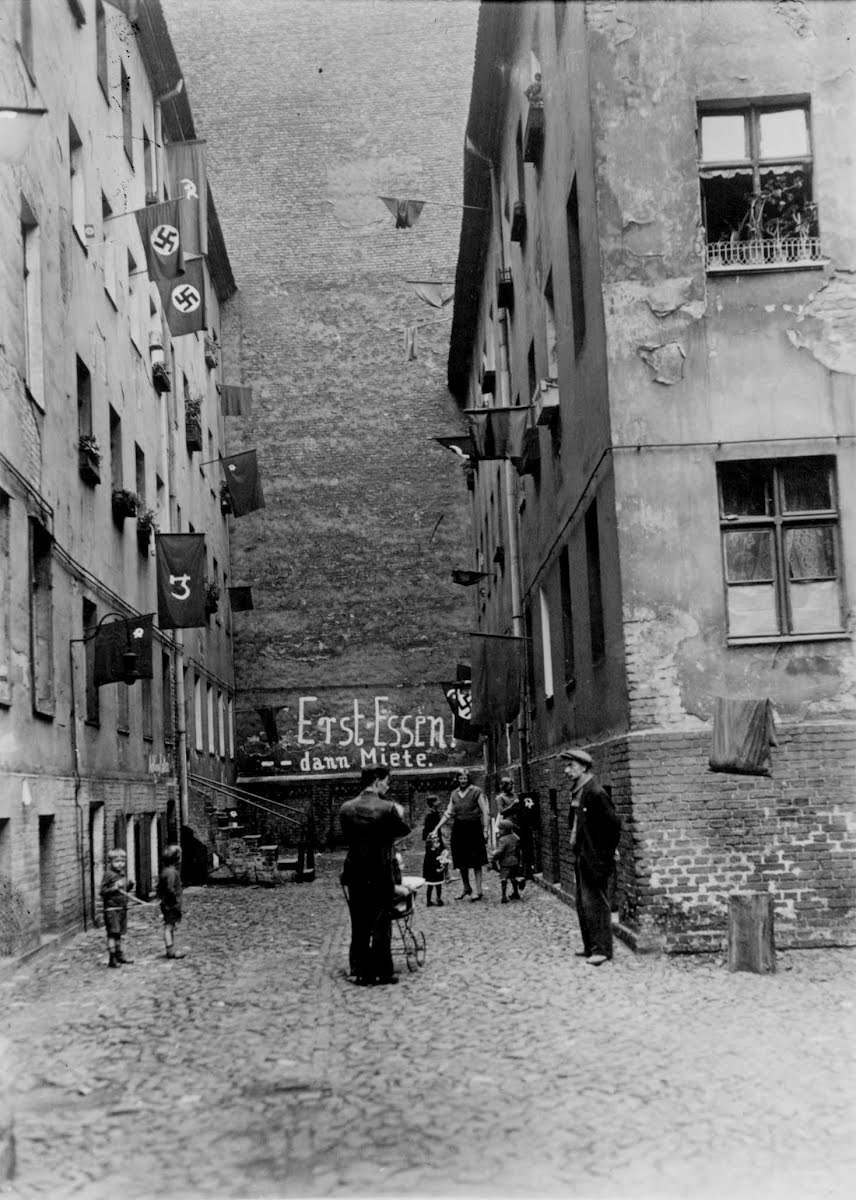 This is not as Google suggests "probably sometime during the 1920s." but in Berlin in the same year of the transportation strike. The writing on the wall says: "First Food – Then Rent". John Toland uses this picture in "Hitler. The Pictorial Biography of His Life" captioning it with "Tenant Strike in Berlin. Reds join Nazis" ––

On his own, Goebbels joined the Reds in a wildcat strike of Berlin transport workers asking for a pfennig or so an hour increase in pay. It was not the first time that the two parties, with many goals in common, had fought together; and for the next few wet, raw days the Communists and the National Socialists ate communally on the picket line. Side by side they pelted rocks at strikebreakers, tore up streetcar tracks and built barricades.
Hitler could not publicly disavow the actions of his impetuous disciple but he was privately angry at alienating so many middle-class voters and sent orders to end the strike. “The entire press is furious with us and calls it Bolshevism, but as a matter of fact we have no option,” explained Geobbels in his diary. “If we had held ourselves aloof from this strike our position among the working classes would have been shaken.” From John Toland: "Adolf Hitler", Anchor Books: New York, 1976, Part 4: The Brown Revolution/Chapter 10: “It Is Almost Like A Dream” 1931–January 30, 1933

Events of the transportation strike are covered in party newspapers Vorwärts ("Onwards", SPD) and Die Rote Fahne ("The Red Flag", KPD). The latter detailing how NSDAP upper echelons recalled the muscle in form of SA, despite the NSBO leaders desire to continue the fight alongside the communists.

Not the answer you're looking for? Browse other questions tagged communism nazism weimar-republic or ask your own question.