What is the history behind this English village well?

The thatched well (below) in the village of East Marden is a well-known attraction in the South Downs, not far from Chichester. The village is recorded in the Domesday Book (as Meredone) and St. Peter's Church (in the background) is from the 12th century. 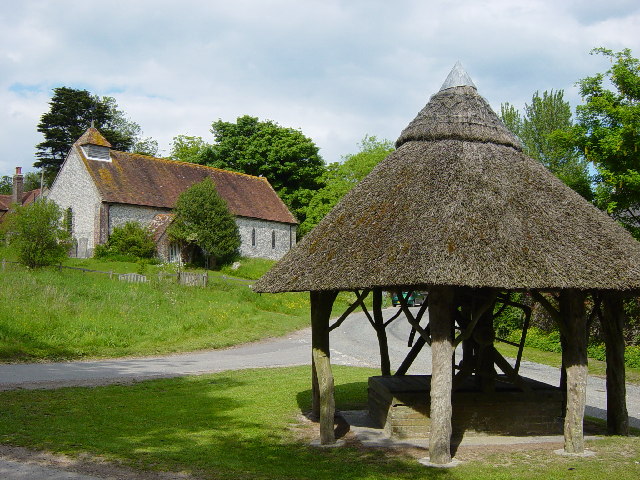 According to the information on this pin and this South Downs National Park Authority pdf, the well is 200 feet deep, has an 18th century pump and was the only source of water in the village until 1924.

However, the story before the 18th century is unclear. The article Secret Villages of the South Downs relates this story on the well and Saint Richard of Chichester (d. 1253):

He is said to have performed a minor miracle hereabouts, when, in answer to the prayers of the villagers during a drought, he provided a spring of cold, clear water. Could this be the origin of the thatched well, which forms a landmark in the centre of East Marden to this day?

Is there anything in the historical record about whether the well pre-dates the pump (i.e. the water was brought up with buckets on a rope)?

Also, for how long has it had a thatched roof?

My reason for asking this (perhaps seemingly obscure) question is that I spent much of my childhood in this village. Unfortunately, none of the people I knew there at the time are still there (and I now live on the other side of the world).

This story is not present in the 1815 book, A History of the Western Division of the County of Sussex: Including the Rapes of Chichester, Arundel, and Bramber, with the City and Diocese of Chichester, Volume 1, p.134, which says East Marden is "ill supplied with water." According to A History of the County of Sussex: Volume 4, the Rape of Chichester (1953) pp.107-108, the church dates to the 13th century and none of the parish's other buildings earlier than 1728; it makes no mention of the well. (Note that the word Rape in the titles of these two cited works is a term for a territorial subdivision of (apparently only) the county of Sussex.)

Not the answer you're looking for? Browse other questions tagged middle-ages england early-modern or ask your own question.

16
What was the reaction to English monarchs using the title "King of France"?
16
What was the political consciousness of a 15th century English peasant?
6
What is the term for a person who surveys the land and relays messages from a noble to his governed village?
9
What were the rights and responsibilities of (various classes of) 11th century English commonfolk?
21
How long did it take to get news of the sighting of the Spanish Armada from Land’s End to London?
8
What are these items in this 16th century plan of an English town?
8
How well did William III speak English at time of the Glorious Revolution in 1688?
3
What expenses did a village have?
2
What were English 'rules restricting marriage'?