Inter-ethnic conflicts in Switzerland in the 16th century

I have come across this description in Paddy Ashdown's (excellent) autobiography A Fortunate Life:

I have often been struck by the similarities between those countries whose fortune (or misfortune) it is to find themselves at the junction of the tectonic plates of race, culture and religion. Countries like Switzerland, Afghanistan and Bosnia are all of them mountainous regions, incredibly beautiful, the battlegrounds of conquerors and the cockpits in which, from time to time, terrible inter-ethnic conflicts break out (before the Treaty of Ticino in 1516 the famously peaceful Switzerland of today was the Bosnia of the middle ages when it came to internal war and ethnic conflict).

What were the main inter-ethnic (racial, cultural, religious) dimensions of the 16th-century and perhaps earlier conflict in Switzerland that the author is referring to here?

I think he's off base about Switzerland, unless he is mischaracterizing the nature of the Swiss confederacy. I'm also not sure what he means about ethnic strife. He's probably talking about the Duchy of Savoy and France directly to the south, and the passes from France into Northwest Italy. It's a strategic point in Western Europe by which France was trying to expand into Italy, at the expense of the Holy Roman Empire and the Italian states. It's importance also made it a point of contest by the local nobility of Savoy and Milan.

Ticino is a region in Switzerland that juts into Milan, and was annexed to it in 1516. 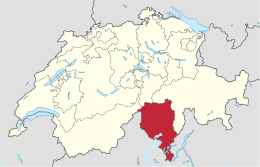 In this case, 'ethnic-conflict' is presumably referring to ethnicity in the same way as it is defined in the Wikipedia article:

An ethnic group, or an ethnicity, is a category of people who identify with each other based on similarities such as common ancestry, language, society, culture or nation.

The group need not be based on race, culture, or religion.

The article on Swiss people states:

The traditional ethnic composition of the territories of modern Switzerland includes the following components:

Now, Personally I don't know whether these groupings are generally agreed, or whether there is some dispute. That is not the point.

The point is that these groupings are accepted as ethnic groups by at least some people using that definition. Furthermore, by that definition conflict between these group is ethnic conflict, and Lord Ashdown's categorisation would seem reasonable.

Not the answer you're looking for? Browse other questions tagged 16th-century switzerland afghanistan bosnian-war or ask your own question.