When did the word “Holodomor” appear?

Holodomor (Голодомор) is a part of the Soviet famine of 1932–33.
The events in Ukraine were called "Holodomor", but when did the word appear?

Google Books Ngram Viewer shows no mentions of Holodomor before 1990s,
and while it shows a couple of mentions of Cyrillic word Голодомор as early as 1938,
I couldn't find anything relevant on the Google Books search proper.

When did the word Holodomor appear?

Wikipedia explains the etymology of holodomor as follows:

The word Holodomor literally translated from Ukrainian means "death by hunger", or "to kill by hunger, to starve to death". Sometimes the expression is translated into English as "murder by hunger or starvation". Holodomor is a compound of the Ukrainian words holod meaning "hunger" and mor meaning "plague". The expression moryty holodom means "to inflict death by hunger". The Ukrainian verb moryty (морити) means "to poison somebody, drive to exhaustion or to torment somebody". The perfective form of the verb moryty is zamoryty – "kill or drive to death by hunger, exhausting work". The word was used in print as early as 1978 by Ukrainian immigrant organisations in the United States and Canada. However, in the Soviet Union – of which Ukraine was a constituent republic – references to the famine were controlled, even after de-Stalinization in 1956. Historians could speak only of 'food difficulties', and the use of the very word golod/holod (hunger, famine) was forbidden.

Discussion of the Holodomor became more open as part of Glasnost in the late 1980s. In Ukraine, the first official use of the word was a December 1987 speech by Volodymyr Shcherbytskyi, First Secretary of the Central Committee of the Communist Party of Ukraine, on the occasion of the republic's seventieth anniversary. An early public usage in the Soviet Union was in February 1988, in a speech by Oleksiy Musiyenko, Deputy Secretary for ideological matters of the party organisation of the Kiev branch of the Union of Soviet Writers in Ukraine. The term may have first appeared in print in the Soviet Union on 18 July 1988, in his article on the topic. "Holodomor" is now an entry in the modern, two-volume dictionary of the Ukrainian language, published in 2004. The term is described as "artificial hunger, organised on a vast scale by a criminal regime against a country's population." - Holodomor (Wikipedia) 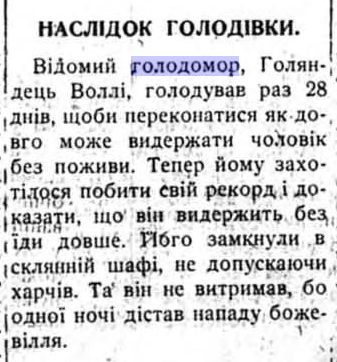 The word "голодомор" appears in multiple issues of this daily paper through 1939 and once again in 1952.

This term was first mentioned on August 17, 1933 in in a Czech magazine "Večernı́k P.L.", where the information about the "Hladomor v SSSR" was published.

Not the answer you're looking for? Browse other questions tagged 20th-century soviet-union etymology ukraine famine or ask your own question.

3
What is the basis for the claims that the word “Israel” means “Exiled for their sins”?
66
Why did the USSR give Crimea to Ukraine?
11
How many people were affected by the Holodomor [Famine-Genocide in Ukraine]
18
Is Snyder's claim about Soviet-German friendship propaganda posters (1939‒41) supportible?
6
How did the French word 'familier' become associated with the concept of Magical Familiars, historically?
28
How popular was the Soviet Union?
6
How and when did the border regime change when the USSR broke up?
11
What was the source of “presidium” as used by the Soviets?