What do we know culturally about Cheddar Man?

There's a lot of press today about a new DNA study of Cheddar Man, who lived about 9,000 years ago in what's now the English county of Somerset. They concentrated on the genes for hair, skin, and eye pigmentation, and found out that he had rather dark skin, dark hair, and blue eyes. A facial reconstruction with the proper coloring is shown here. 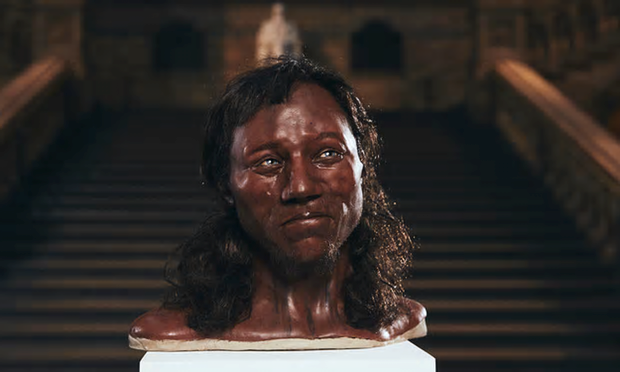 Picture from story in The Guardian

I'm seeing a lot of people talking like they see a resemblance with modern Welsh or other Celtic peoples, so I think it would be good to look into exactly what Cultural lineage he might share with modern Britons.

So the question is, what exactly was the culture of this man, and are any of the modern cultures of the British Isles descended from it?

No, Cheddar Man's culture would not have been ancestral to any modern English peoples.

First off, while its kind of fun to see, the man's body coloring isn't really any more significant than the color of his clothes. His people likely had issues with Rickets (as did early modern Londoners due to the smog), but that's about the only impact it would have had on his life.

His culture was not directly ancestral to any extant English group. Celtic culture (Welsh, Cornish, etc.) probably did not make it to England until around 800 BC. I've seen some talk about there perhaps being a relationship to the more enigmatic Picts, but the current thinking is that their language was most likely Celtic as well.

The Anglo-Saxons were even later, of course. In fact, 9,000 years ago, not only did Celtic not exist yet, but its theoretical parent language of proto-Indo-European probably was a couple of millennia in the future. When it did come into being, its speakers are thought to have lived in western Asia.

There are probably some traces of his culture that had a modern impact though. The most intriguing example is a possible connection with Stonehenge. Well, at least the site of Stonehenge. Some post-holes have been found nearby that were dated to about 8,000 BC. Not only is that right around the time Cheddar was alive, but Stonehenge is less than 50 miles from Cheddar. Nobody is sure if there was any ritual significance to their placement, but whatever it was, Cheddar Man's culture probably did it.

Not the answer you're looking for? Browse other questions tagged britain prehistory or ask your own question.

19
What is known about the possibility of a “real King Arthur”?
9
What is the oldest verifiably correctly translated written work?
2
What was the motivation behind prohibiting hunting in King's forests?
6
What distinguishes the mesolithic period from neolithic and paleolithic?
4
What were British voting qualifications in the 1770's?
1
What evidence do we have that disabled people became shamans in pre-historic times?
33
When did Britain learn about the American Declaration of Independence?
5
What did the English people during the Peasants' Revolt know about the Ciompi Revolt?