Did the Soviets cooperate with the Americans in catching criminals in post-war Vienna?

I'm writing a novel that is set in Vienna during the period when it was occupied by, among others, the Americans and the Soviets (1945-1955). The central district (grey in the image below) belonged to all the occupational powers. 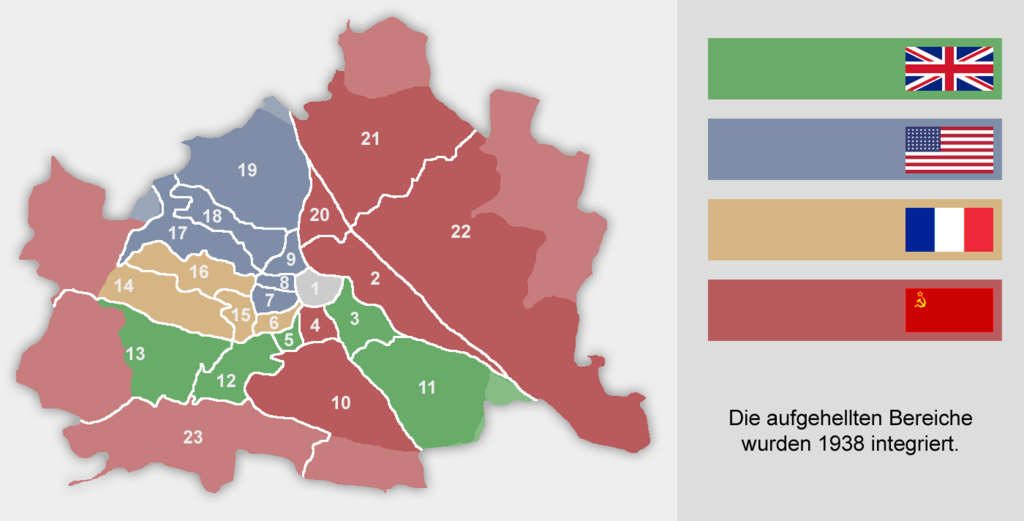 In my novel there is a character (a native Austrian) who seriously injures (on purpose) an American soldier or officer. After the crime he needs to hide somewhere. He considers running to the Soviet zone in the hope that it will make it more difficult for the Americans to find him there. This leads to the first question.

Question #1: Did the Soviets cooperate with Americans when investigating serious crimes?

Question #2: Whose police forces would perform a large operation, if the need arose?

The only way to catch him is to storm that place.

Whose troops (Soviet, American) are more likely to do this special operation given that

Note: Since I'm writing fiction, I do not need 100 % historical accuracy. I only need believability.

An answer to question #1 seems possible, but is highly dependent on the concrete date.

In late 1945, when the Soviets invited the other allies in, relations were excellent and the cooperation quite amiable. Symbolised in this picture: 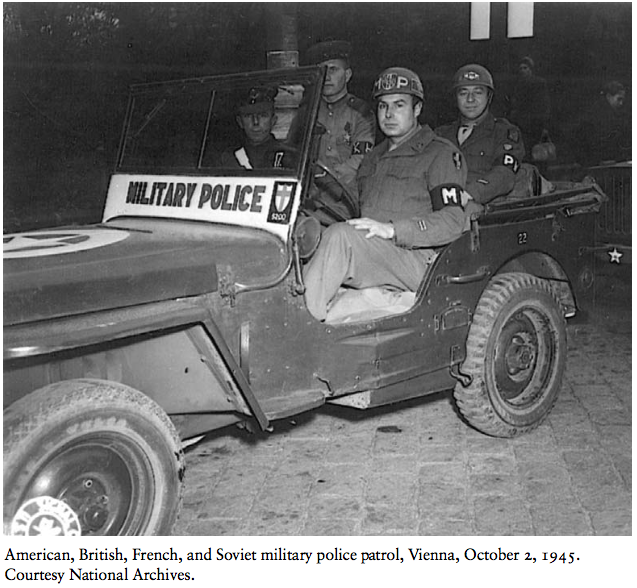 These combined patrols were kept running for quite a while and continued even as the relations went sour. But, just like in Germany, things deteriorated soon. The later years were marked by Soviet obstruction of almost anything, including policing.

As for concerns over Soviet obstructionism, a particularly noteworthy incident was the infamous, almost comical, Christmas Eve Gummiknüppel incident. Without warning on December 24, 1952, Soviet military detachments began fanning out through their zone confiscating the gendarmerie’s rubber truncheons. The Allies were at a loss to explain the behavior, but the U.S. ambassador cautioned that the Soviets “may be releasing trial balloon with intention push control further if unopposed this time. . . . In view customary Soviet technique of moving first against police in any area they intend to take over, we are concerned by possible seriousness Soviet action and propose strong reaction.” This response was not untypical. Any Soviet action against the police or gendarmerie was a matter of grave consternation. (p 187.)

Immediately after the war a criminal offender against Americans would have had a hard time hiding with the Soviets on these principles. Factors like communication difficulties between the allies would still make it a viable idea to try it in the east. At the end of the timeframe given, its very likely that the increasingly – perceived or real – erratic behaviour on the Soviet side made it quite likely that a request for cooperation would be denied or just ignored.

For question #2: I will not dare to speculate.

6
What was the Nature of Resistance in 1938 Czechoslovakia?
8
Did the Allies punish their own war criminals?
50
Did the Soviets excel in one area of weaponry during World War II?
3
Did the Soviets have an alternate source of oil in Iran during World War II?
11
What transit restrictions were in place in Occupied Germany limiting military and civilian movement between the four occupation zones?
8
Where can I find documents from the Nuremberg trials about war crimes of the Wehrmacht in the Soviet Union?
2
Did the Soviets lack ball bearings in WWII?