What is the most number of brothers who became ruler of the same country?

While researching the Danish monarchy for another question on this site (the life expectancy of a Medieval European monarch), I came across the five sons of King Sweyn II who all became kings of Denmark in their own right (i.e. not junior or co-monarchs).

Sweyn II had at least 15 sons in all: only one was legitimate and he died young. The others were by 'various concubines', so there were a few to spare.

The only other example of 5 brothers becoming king I can think of is from the House of Wessex: the sons of Æthelwulf 839 to 858, the youngest of whom was Alfred the Great), but one of them (Æthelstan of Kent) wasn't really king in his own right, and nor was he King of Wessex like his father and brothers (so this doesn't meet the criteria).

Are there any other examples of 5 or more brothers (legitimate or illegitimate) becoming rulers of the same country in their own right?

As instances of this must be very rare, examples can be from any period and any part of the world (but I'll edit this if my assumption is proven to be wrong).

Seven of the sons of Ismail Ibn Sharif of the Morocco Alaouite dynasty were monarchs. Ismail ruled from 1672 to 1727 and had 525 sons and 342 daughters according to Wikipedia (or 888 according to the Guiness Book of Records). Control changed hands many times. The ones who became Sultan were:

Also, there were 5 brothers who were Dukes of the Qi State during the Spring and Autumn period (China). According to Wikipedia, this was "variously reckoned as a march, duchy, and independent kingdom" so this might be a bit suspect (the authority of the Zhou dynasty was 'collapsing' at this time). Anyway, they were the sons of Huan (ruled 685 to 643 ) of the House of Jiang. The sons who became Dukes were:

Here are six brothers, sons of Abdul Aziz (1902-53), who have been (and the most recent still is) Kings of Saudi Arabia: 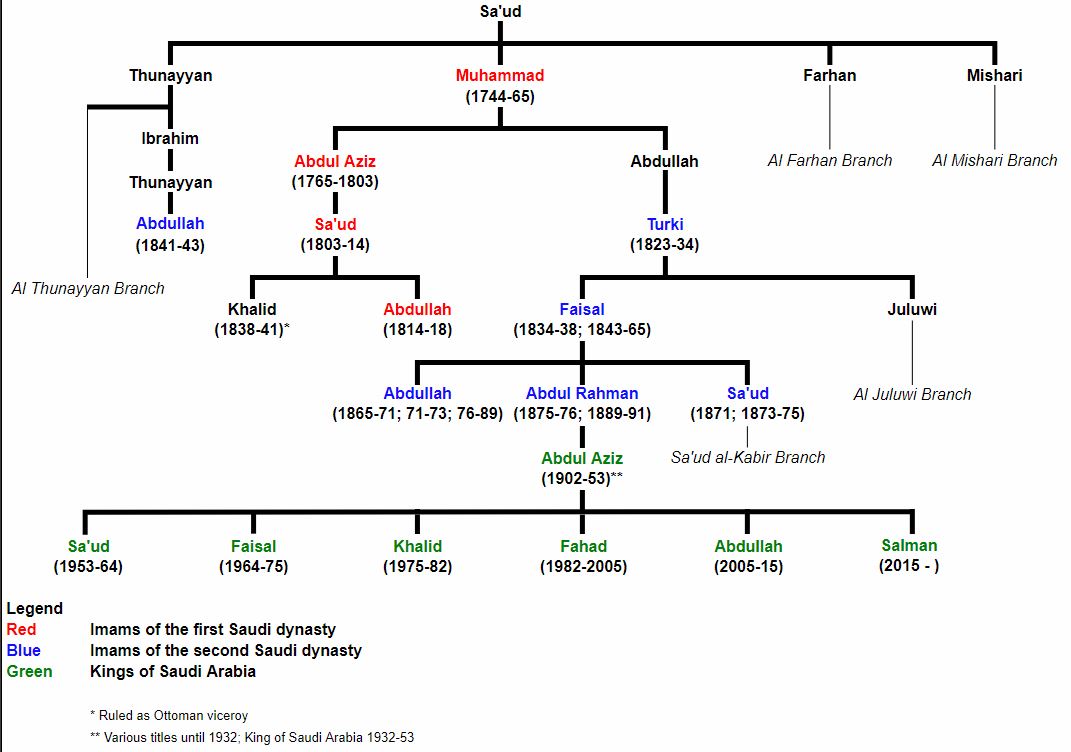 As I remember, the state of Texcoco in Mexico had several generations of sons succeeding fathers, and then several brothers succeeding brothers.

The last long reigning ruler, Nezahulapilli reigned from 1472 to 1515.

However, I seem to remember that some sources give more than those five or possibly six as sons of Nezahulapilli who ruled Texcoco.

There were five brothers in the Abbasid caliphs at Cairo.

And five Kings of Kings of Ethiopia who were brothers, sons of Yagbe'u Seyon or Salomon II r. 1285-1294:

Although there is some doubt about the relationship.

This is a little bit of a stretch, as one was granted the title, but never gained control of the country, but five of the sons of Thorfinn Skull-splitter were Jarls of the Orkneys, which was more or less independent:

(Lots of interesting stuff here: the first three brothers were all married to the same woman, Ragnhild, who killed them off and also set her nephews against eachother. Ljot fought against MacBeth).

Well, if you include people who claimed to be a son of the king and aspired to the throne but didn't quite get there, the sons of Magnus Barefoot of Norway qualifies:

(The two last claimed that they were sons of Magnus after his death).

First, we have the sons of Harald Gille from the list above:

And finally, the sons of Malcolm III of Scotland:

Not the answer you're looking for? Browse other questions tagged monarchy world rulers or ask your own question.

34
What is the most number of times someone has become leader of a European country?
14
What was the life expectancy of a Medieval European monarch?

18
Who was the first woman ruler?
11
Who is the oldest ruler whose remains can be positively identified?
17
What is the historical reason for 18 years being the most commonly accepted age of adulthood?
6
What was the most recent Catholic coronation ceremony of a king?
4
Who was the most recent pope to crown a king or emperor?
43
Has an heir ever made the country believe the current ruler died in order to take over the throne?
34
What is the most number of times someone has become leader of a European country?
30
Who was the first female ruler to be given the suffix, “the great”?
4
What will be the regnal number of the next Queen Mary in the UK?