Is there any record of the premature obituary of Alfred Nobel?

It’s widely shared that Alfred Nobel, who posthumously founded the Nobel Prizes, had read a premature obituary about himself castigating him for his role in producing and trafficking deadly products, such as dynamite. The story goes that reading this as a forewarning of his legacy shocked him so deeply that he started the Nobel Prizes in order the celebrate the good in humanity.

Are there any surviving copies of this premature obituary? If not, what is known about it?

His death was prematurely reported in a Paris newspaper. That paper and its author are uncertain, as is the exact text. It is unclear whether or how much the alleged text influenced Nobel.

It seems there are no surviving copies. It would have looked that in all likelihood that this would be an urban legend, despite being mentioned in his biographies. More likely Nobel's friendship with Bertha von Suttner was the inspiration for creating the Nobel Prize.

The newspaper incident is often cited as the driving force behind Nobel’s philanthropy, but historians have yet to find an original copy of the “Merchant of Death” obituary. Some now dismiss the story as a myth, while others argue that it was only one of many factors that helped shape the inventor’s decision. The Nobel Foundation, for instance, notes that he may have first gotten the idea for the science prizes in 1868, when he received an award from the Royal Swedish Academy of Sciences for “important inventions for the practical use of mankind.” Nobel was also a voracious reader who spoke five languages and dabbled in writing plays and poems, and this may have sparked his interest in offering a prize in literature.
(From Did a Premature Obituary Inspire the Nobel Prize?)

An even more direct answer is given by the Nobel Foundation itself to inquiring minds:

In 1888, Alfred’s brother Ludvig passed away. As Kenne Fant puts it, “One French newspaper thought it was Alfred, not Ludvig who had died. Knowing that the inventor of dynamite had also been somehow involved in the weapons industry and had invented a new gunpowder for cannons, the obituary characterized Alfred as a “merchant of death” who had built a fortune by discovering new ways to “mutilate and kill.” Alfred was in his laboratory in Sevran [near Paris France] when he read this, and it pained him so much that he never forgot it. Indeed, he became so obsessed with his posthumous reputation that he rewrote his last will, bequeathing most of his fortune to a cause upon which no future obituary writer would be able to cast aspirations.”
But it’s not so easy. The only hit on the Internet relating to the magazine with the original posthumous obituary said the article was: “12th April 1888 - the premature obituary was published in the Paris newspaper "Ideotie Quotidienne" ("daily nonsense") under the headline "Le Marchand de la Mort est Mort" ("drummer of death is dead" and/or "the merchant of death is dead").”2 I’m skeptical about the veracity of this information, “Daily Nonsense” doesn’t seem real (no other hits on Ideotie Quotidienne.) And the date of Ludvig’s death was April 12 and it is unlikely that a newspaper would get the information out on the same day.
Alfred read the world’s papers such as Le Figaro, Le Matin, The Times, Times Literary Supplement, B.Z. am Mittag and more. It is hardly likely that he read Ideotie Quotidienne, if it existed at all. So I’m still looking for the name of the newspaper. I even contacted the Nobel Foundation and received the following response:

“Dear Peter Macnaughton, There have never been found any documentation about this story despite all the research conducted. Yours sincerely, Nobelprize.org Team”

French Wikipedia does no longer know anything about the newspaper in question and the Nobel Foundation says this about its own origin:

For Alfred Nobel, the idea of giving away his fortune was no passing fancy. He had thought about it for a long time and had even re-written his will on various occasions in order to weigh different wordings against each other. Efforts to promote peace were close to his heart, largely inspired by his contacts with Bertha von Suttner (herself a Nobel Peace Prize winner in 1905). He derived intellectual pleasure from literature, while science built the foundation for his own activities as a technological researcher and inventor. On November 27, 1895, Nobel signed his final will and testament at the Swedish-Norwegian Club in Paris.
(From: Alfred Nobel - Life and Philosophy (nobelprize.org) )

There was a paper called "La Quotidienne" archive here. Looking through several French archives for "a newspaper" was quite fruitless. No obituary.

At least this paper existed at the time and has an online archive. Results for Le Figaro April 15 1888 page 1 and 2:

Translation: A man who can not very easily pass for a benefactor of humanity died yesterday in Cannes. It is Mr. Nobel, inventor of dynamite. Nobel was Swedish.

That is not as vile, colourful and extensive as the alleged citation goes and also not an obituary. (And the German news outlet at least in error.)

Another dismantling of the whole hoax allegation is in French:

There is no obituary in the archives. But

This paper is not archived by BNF but it apparently did exist.

However, Le Figaro dated April 16th 1888 did run a correction to someone reporting the death of Nobel: 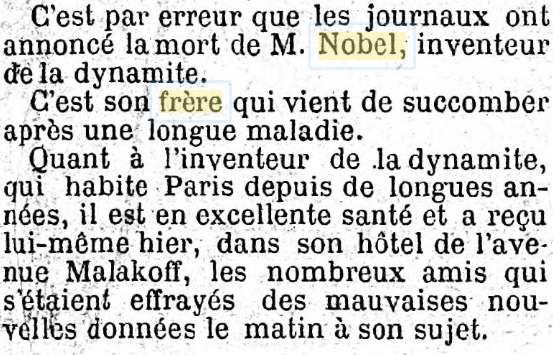 19
Was there any theological opposition to the lightning rod?
11
Is there any science behind this graph that suggests we'd be exploring new galaxies if not for the dark ages?
5
Were there any pro-Native American groups during the Indian Wars?
2
Are there any surviving military textbooks from the Napoleonic era?
2
Was there any politization of "hard" science (math, physics, chemistry, biology) in the Asian communist countries?
1
Is there any way to link John Marshall to Andrew Johnson's impeachment?
35
What is this symbol in a financial record from Wisconsin, USA, in 1860?
2
Is there any documentation of the use of scientific knowledge or technology in pagan temples?