Which of Ben Franklin's grandsons was blessed by Voltaire?

I've seen this image and I was curious if anyone knows which grandson of Ben Franklin's this is receiving Voltaire's blessing: 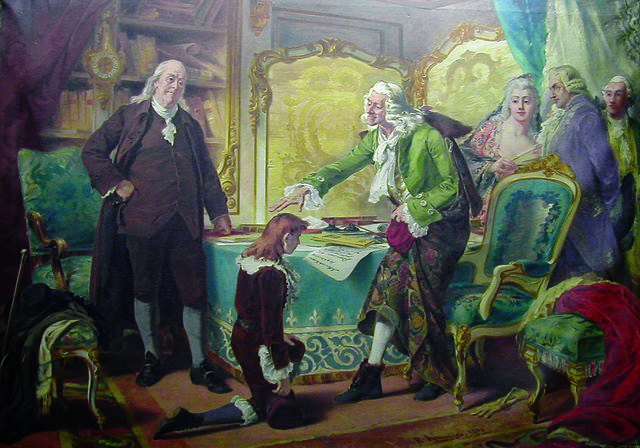 According to Voltaire and the Century of Light By Alfred Owen Aldridge, (page 400) it was

Franklin brought his namesake and grandson of eight years, Benjamin Franklin Bache to meet Voltaire and, accordingly, requested a benediction for the little boy. In the midst of twenty witnesses, Voltaire, according to his own recollection, pronounced the simple blessing "God and liberty".

This really is more convoluted then it appears, as there are different opinions on which grandson this might be. Some of the controversy and sources supporting both views are listed in an authors note for Franklin and Bache: Envisioning the Enlightened Republic By Jeffery Alan Smith, for any who wish to investigate further. One thing mentioned here is that Temple would have been an adult:

Various accounts of this meeting exist, some of which suggest that Voltaire blessed Franklin's other grandson, but the versions seem to agree that it was a young child rather than the fully grown Temple.

Concerning trying to discern the grandsons apparent age from the image in the OP's question, this painting is credited in Wikipedia to Pedro Américo, who, being born in 1843, was not directly familiar with the subjects in his painting; they had all died well before he was born. The painting really can offer no assistance in answering this question.

@justCal appears to be correct:

Born on 12 August 1769, Bache was soon taken under the mentorship of his famous grandfather, Benjamin Franklin. In 1776, when Franklin went on a nine-year diplomatic mission to France, he took the seven-year-old Bache with him so that the child would get an enlightened education. Franklin then enrolled Bache in Le Coeur boarding school in Passy, a suburb of Paris – during this time, Franklin also arranged for the boy to meet Voltaire. PSU

Difficult to cite an absence of evidence, but I searched for both young gentlemen's names in connection to Voltaire; the citations for Bache are more detailed and more specific (see above).

Not the answer you're looking for? Browse other questions tagged united-states france american-revolution french-revolution or ask your own question.

11
What was the third best-selling book in the antebellum US?
22
What did Richelieu mean by his “six lines” quote?
11
Who are all the people in this photo of the signing of the Civil Rights Act, 1964?
11
What did Ben Franklin mean when he said “The sun of liberty is set; you must light up the candle of industry & economy”?
2
Who was the Kilroy?
1
Is the “refuse” side of this American Revolutionary War document really empty?
1
Was “Mad Anthony” Wayne of the Continental Army really that cruel like shown in this video?
5
During WW2, why did the USA occupy Clipperton Island?
3
What influence did Benjamin Franklin's association with Freemasonry have on his success in France?