How long would it take to travel from England to western Africa in the late 1890's?

I am trying to do some research for a book I am planning to write, and I would like to know how long it would take for a troop transport ship to travel from England to the Gold Coast region of Africa. More specifically, the final destination is the Ashanti tribal region, and the date would be around 1895 or 1896. If anyone could identify any ports of call that might be visited along the way, that would be helpful as well.

Ok, first we need to find the destination port. Wikipedia notes that Ada and Prampram were important ports in addition to Accra. Good, can we find logs from any ships that traveled from England to these destinations?

I searched but couldn't find anything for either Ada or Prampram (maybe these ports already lost their importance in the 19th century). For Accra I finally found two travel descriptions: HMS Amphitrite in 1848 and MV Apapa in 1930. It seems that HMS Amphitrite only lived until 1875 whereas MV Apapa wasn't built before 1927. So none of them could have been used in 1895.

Looking through the list of British ships that could have been used in 1895 I found SS Fazilka, a steam cargo ship that was also used to carry migrants and troops at some points. With a top speed of 12.5 knots it wasn't much slower than MV Apapa (14.5 knots). It took MV Apapa 9 days to go from Liverpool to Freetown (Sierra Leone), SS Fazilka should have been able to make the same journey in 11 days. The trip from Freetown to Accra took another 4 days, SS Fazilka would have been able to do it in 5 days.

Now you have to consider the stops of course. The logs of HMS Amphitrite aren't very representative, the paddle steamer HMS Hydra in 1852 is probably a better example:

So essentially it took HMS Hydra 15 days to travel from England to Sierra Leone, the jorney that MV Apapa did in 9 days. It seems that 11 days for the same journey in 1895 aren't an unreasonable assumption. And the stops are pretty typical (have a look at the logs of the other ships on the same server): Madeira, then Sierra Leone. The next stop would be Accra already. 2-3 days spent in a port seem typical for 19th century, so we would get a total travel time of 16 days plus 4-6 days for the stops meaning 20-22 days.

Based on evidence from the period 1894 to 1897, the trip would have taken between 21 and 35 days, depending on how many ports were stopped at on the way. Possible ports of call are shown on the map below. It's unlikely that many ships went from England to the Gold Coast without stopping anywhere on the way, but a journey time of less than 21 days would have been possible.

The Colonial Reports for Gold Coast give the information you seem to be seeking. Concerning the Kumasi expedition of 1895-96 (Kumasi being the capital of Ashanti), the 1895 report (pdf) states:

The command of the expedition was entrusted to Colonel Sir Francis Scott, the Inspector-General of the Gold Coast Hausa Constabulary, who, accompanied by the Head Quarter Staff, left England on the 23rd November. The whole of the troops engaged in the expedition had disembarked at Cape Coast by the 28th December...

It seems likely that the ship stopped off at Freetown (Sierra Leone) on the way in order to pick up additional troops.

If only going to Prampram, add an extra half day sailing time plus time lost for the ship to stop at Accra (this stop could easily be a whole day as Accra was by then the capital of the Gold Coast and thus a major destination). 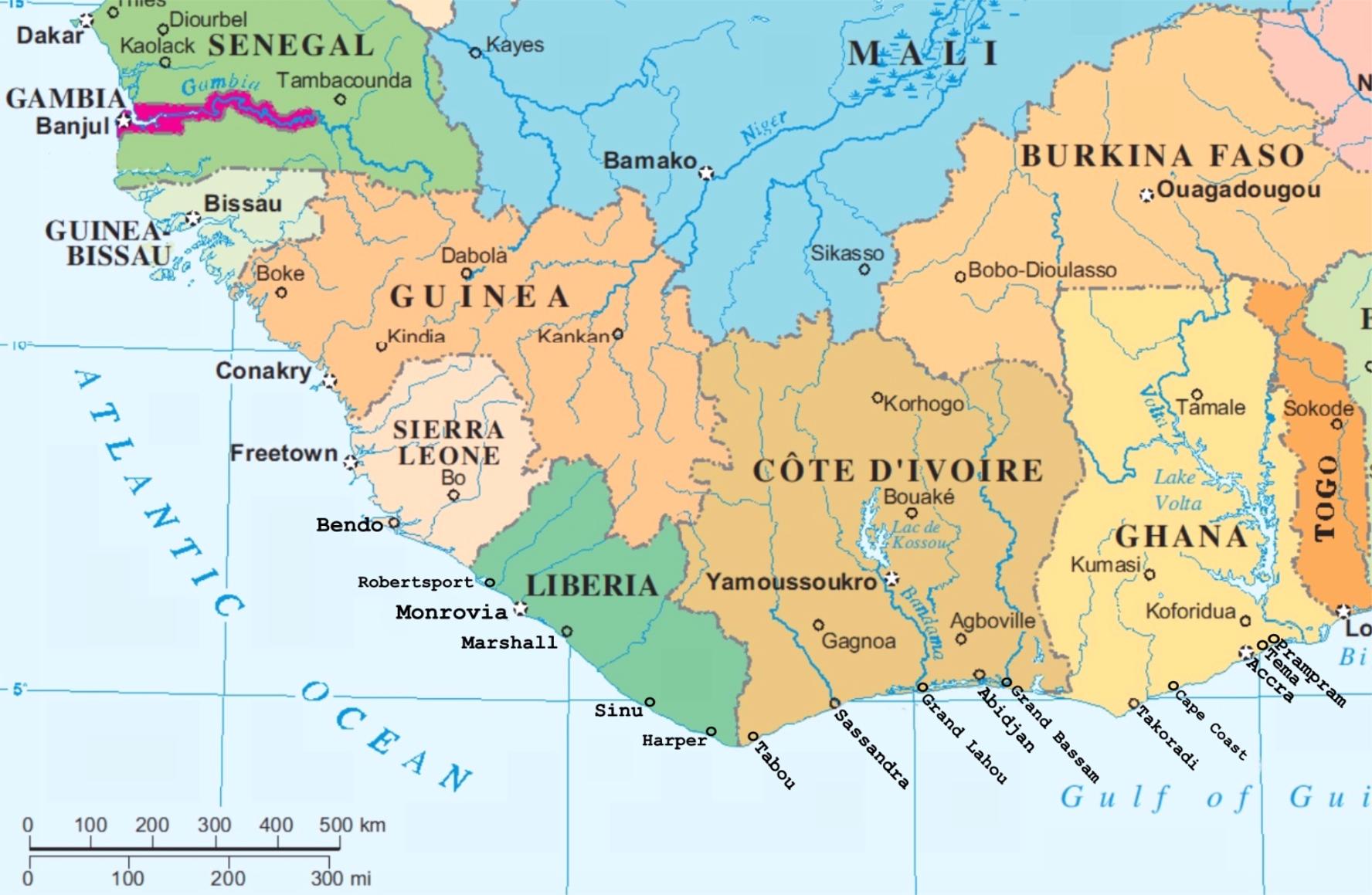 Other stops along the coast the way may have been at places such as Tabou, Sassandra, Grand Lahou, Abidjan, Grand Bassam (all in modern day Cote d'Ivoire, then a French colony but with several British trading posts), Half Assini, Axim, and Sekondi and/or Takoradi (all in modern day Ghana). Whether this particular troop-carrying ship would have stopped at many of these places is hard to tell - ships stopped if there was a delivery to be made, or if there was someone or something to be taken aboard.

It should be noted that there are very few natural deep-water ports along the West African coast (I think only Takoradi of the aforementioned possible stopping points had one) so, using surf boats and canoes,

Loading and discharging of steamers at all Gold Coast ports, except Takoradi, took place off open beaches buffeted by strong surf and which varied in depth with tides and currents. Such circumstances demanded regular employment of ‘trained, experienced and well-disciplined crews’ conversant with the local conditions and the requirements of the cargo handled at such ports. This arrangement presented delays and loss of cargo.

source: ‘Getting Too Great A Grip’: European Shipping Lines and British West African Lighterage Services in the 1930s by Ayodeji Olukoju (pdf)

Getting from the steamship to the shore could be quite dangerous due to strong currents, and bad weather could cause lengthy delays, or (if there was little business to be transacted) the ship would sail on to the next destination without stopping.

Another source, this one for 1894-1895, only takes us to Sierra Leone but gives another reference for journey time:

It was on the 23rd of December, 1894, that we left Liverpool in the Batanga, commanded by my old friend Captain Murray, under whose care I had made my first voyage. On the 30th we sighted the Peak of Teneriffe early in the afternoon....We reached Sierra Leone at 9 A.M. on the 7th of January

A final piece of evidence for travel times comes from the Colonial Report for Gold Coast for 1897 (pdf), where it states:

The mail service with England remains the same, the GOLD COAST, voyage taking, on an average, from Liverpool to Accra, a distance of 3,920 miles, 21 days.

According to Bradshaw's Through Routes to the Capitals of the World and Overland Guide to India, Persia, and the Far East (from 1903, so a bit later than you're looking for), it would take about 16 days on a commercial steamship to get from Liverpool to Sekondi. The ports of call listed along the way for the "Express" steamer are Grand Canary, Sierra Leone, Axim, Sekondi, and Cape Coast Castle. Presumably, though, a troop transport would not need to make multiple stops along the Gold Coast. 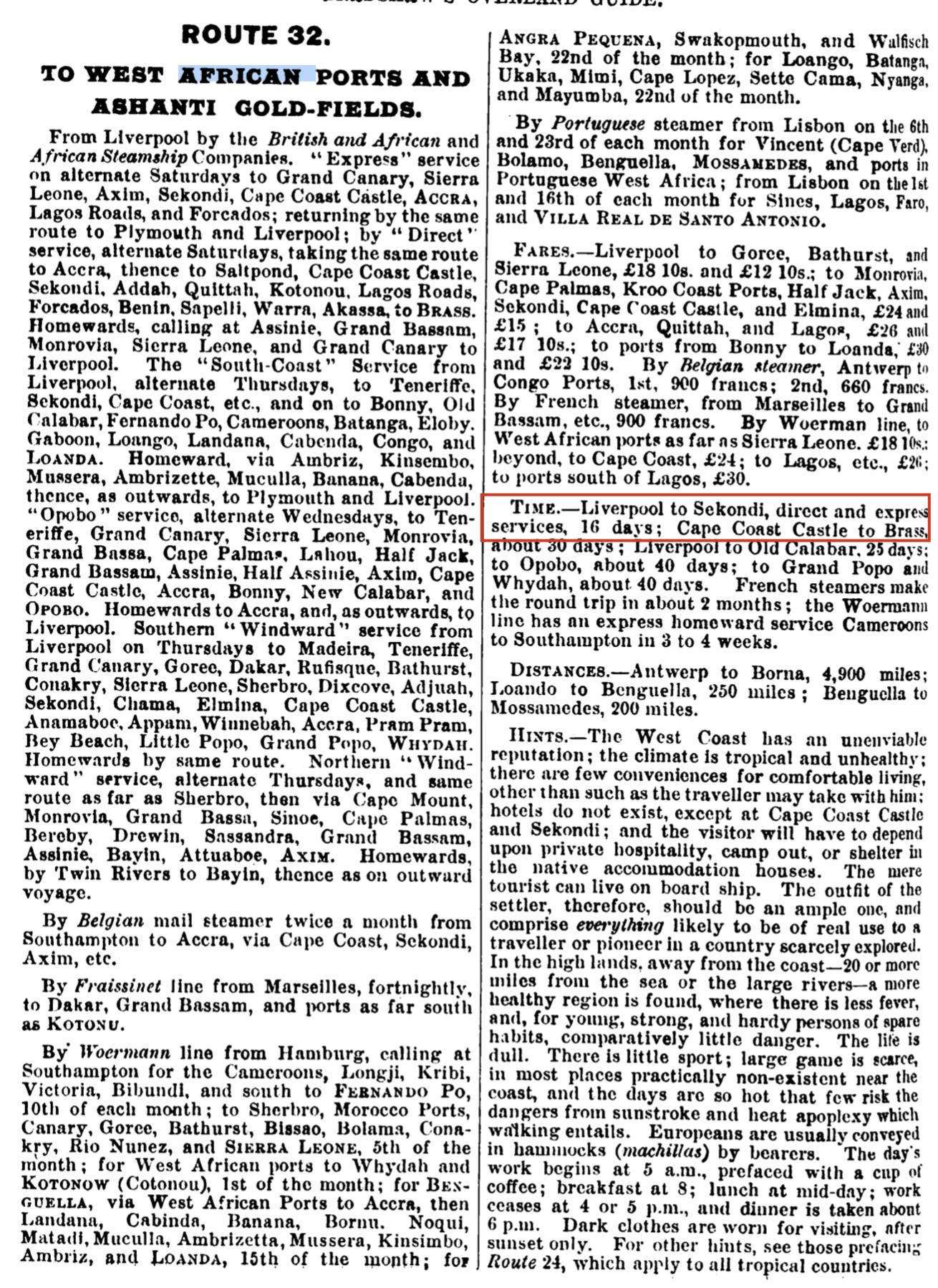