Did the Horatii brothers take an oath as depicted in the painting Oath of the Horatii?

In the Oath of the Horatii, the Horatii brothers are depicted taking an oath before their father, with their sisters mourning at the side: 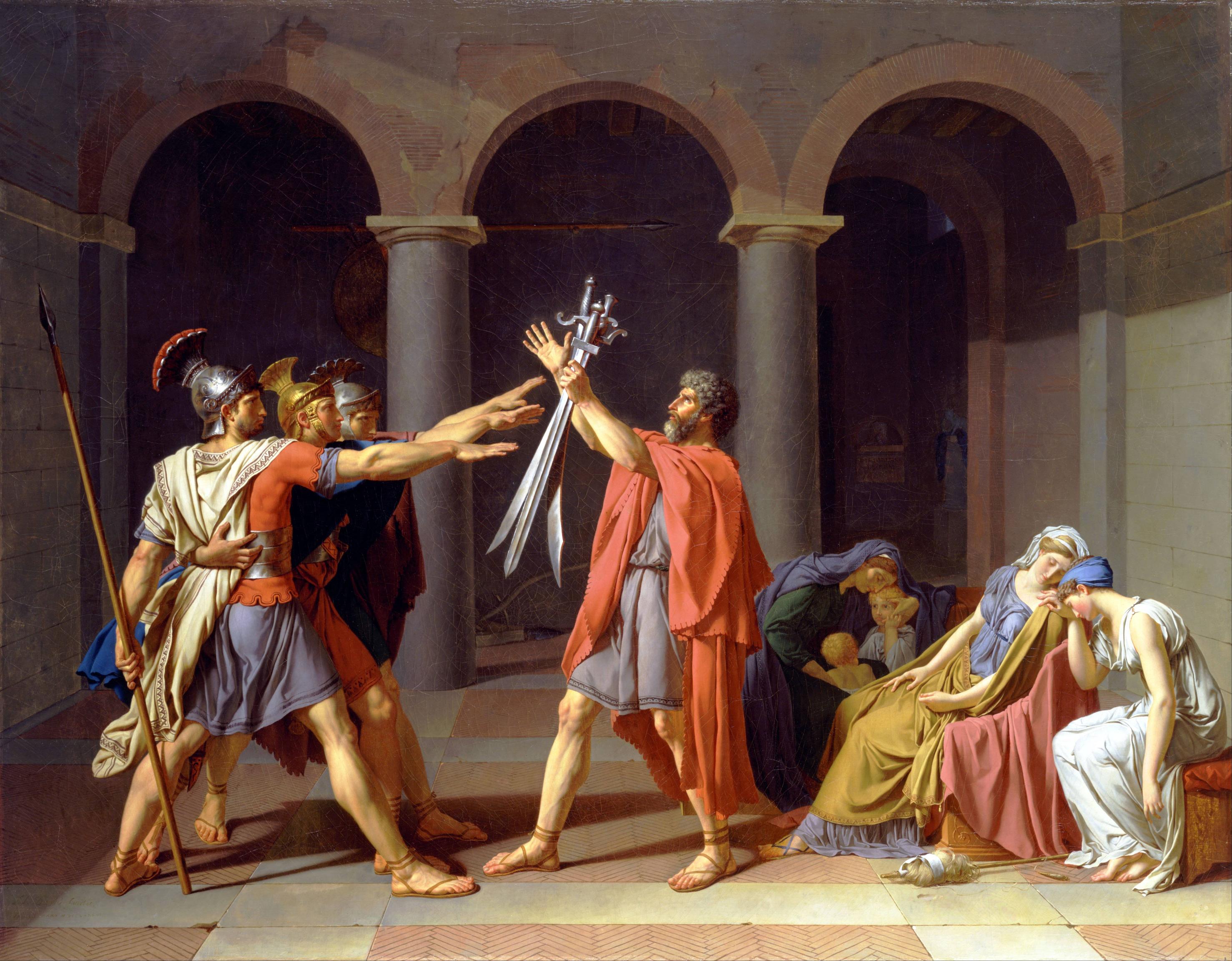 I would like to know whether there is any mention or evidence of the depicted oath in Roman sources. Do our sources tell that this oath took place in the way it is displayed in this painting?

I am inclined to think that this is not the case. Several reasons come to mind:

It could be possible to spot mistakes here and there. Attire and architecture could be, as it often happens, good nitpick or discussion sources. For instance, the helmet crest might not have been used at the time of the combat; if I recall correctly, it is first mentioned in the period of the first wars against the Gauls, during the times of the Republic. However, such details would not contradict the represented act of the oath, in the case that it were true, so they are not relevant to my question.

I am aware that it is possible that the author of the painting based his work not on the Roman sources, but on depictions and other derivative works, like the play Les Horaces. However, I am only interested in actual sources and the painting's concordance with them.

According to your Wikipedia page:

It depicts a scene from a Roman legend about a dispute between two warring cities, Rome and Alba Longa, and stresses the importance of patriotism and masculine self-sacrifice for one's country.

In the ancient Roman legend of the kingdom era, the Horatii were triplet warriors who lived during the reign of Tullus Hostilius. The accounts of their epic clash with the Curiatii and the murder of their sister by Publius, the sole survivor of the battle, appear in the writings of Livy.

Who is Tullus Hostilius supposed to be?

As with those of all the early kings of Rome, the events ascribed to the reign of Tullus Hostilius are treated with skepticism by modern historians. Part of this is due to obvious flaws in the literary tradition describing the kings: much like the confusion the Ancients exhibited in attributing identical accomplishments to both Tarquinius Priscus and Tarquinius Superbus, the accomplishments of Tullus Hostilius are thought by many scholars to be rhetorical doublets of those of Romulus.

Let me emphasise that again in force, since Wikipedia is a bit too diplomatic there: even the early republic left no reliable written sources for us. The kingdom era is even more so much less reliable than that. Shrouded in myth, legend and fantasy. There may be traces of actual history in it. But that cannot be ascertained. You cannot take one single thing or fact from the monarchical period and treat it at face value.

Adding to that that the picture in question is more than 2000 years younger than the "event" displayed and is typically for that style inventing its inventory in terms of clothing and weapons, it only presents an idea and allegory. Nothing in it can claim any historical accuracy.

But taking aside the fundamental aspect of "there were no real Horatii": this picture displays a scene that is not to be found in the sources we have, legendary as their factual content is. The absence of the scene from Livy means that the whole setup is made up by the painter as a form of interpolation.

Not the answer you're looking for? Browse other questions tagged historical-accuracy roman-kingdom or ask your own question.

14
Are the swords in the Oath of Horatii all Roman?
0
What did the Romans call Cardigan the town in West Wales, UK?
4
Why did Emperor Xian's flight from Chang'an take one year?
3
Did Cao Cao really say the greatest traitor resembled an honest man?
10
Why did Mettius Fufetius not join the Veiites in directly attacking the Roman King Tullus Hostilius?
6
Is the use of flamethrower style naval weapons depicted in this game accurate?