Was there an alcohol abuse problem among monks and priests in the High Middle Ages in England?

I read somewhere (just can't remember where) that monks in the High Middle Ages in England sometimes had a reputation for drinking too much.

For supporting evidence (not conclusive I know), I found a reference to Archbishop Anselm telling (in 1102) priests not to go to 'drinking bouts'.

I also found this picture. The article it is used in just says the monks of Bicester may have drunk 10 pints a week. This isn't much I think but the picture with the article is implying otherwise. Also, monks did most of the brewing in England in the Middle Ages so I guess it wasn't difficult for them to get plenty of beer. 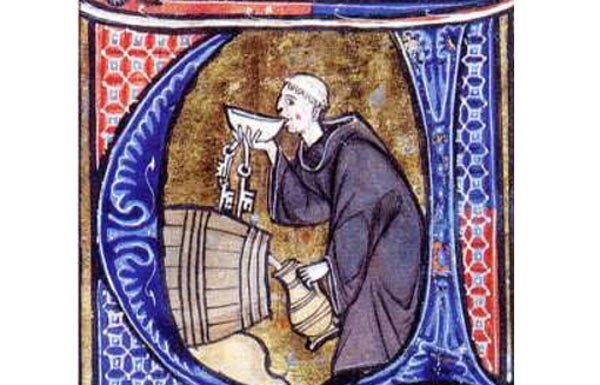 So, did monks and priests have a reputation for drinking too much? Was it a problem, e.g. was it a health issue or did it damage the reputation of the church in local communities? Or was drunkenness among the clergy considered to be 'they're just human, no one's perfect'?

Is there any other evidence of a senior church man telling priests and/or monks to drink less?

Answers for the Early or Late Middle Ages would also be interesting but I'm mostly interested in the High Middle Ages.

While it seems to be a very common myth that in medieval times people avoided water and only drank beverages, that were at least a bit alcoholic, many books and recipes and descriptions feature indeed a health dose of constant inebriation, throughout the day. Starting the morning with a light beer soup and continuing in the same manner into the night. Also of note are the numerous complaints left to us in writing of monks suffering terribly from gout, a condition greatly amplified by drinking too much beer, especially of the unfiltered kind. Of course, at the time beer or ale was not in the least under suspicion for this malady.

Alcoholism among Medieval Clergy, Nuns and Pilgrims
In striking contrast with the present time, when clergy, especially of the Nonconformist Churches, form the most sober members of the community, in mediaeval England the clergy of this country as well as abroad were notorious for their inebriety. The monks of Canterbury in particular in the eleventh century seem to have been conspicuous in this respect, as is shown by the statements of William of Malmesbury (“ Gesta Pontificum,” lib. i., 44) and Giraldus Cambrensis (1146–1220), two of the best-known writers of the twelfth century. William of Malmesbury states that the monks at Bath prolonged their banquet into the night and went on drinking till dawn (ch. ii., 75), and also alludes to a certain abbot named Brightwold, who died at a drinking bout and was buried in a marsh (v.,258). In a satirical poem by an anonymous writer, apparently a monk of Kildare, at the beginning of the fourteenth century, entitled “The Abbot of Gloucester’s Feast,” the gluttony of the abbot and friar and their ill-treatment of their inferiors is described. A very similar but shorter poem is found in a fifteenth-century manuscript, in which the writer complains that the abbot and friar drink good and highly flavoured wine, while nothing but inferior stuff is usually given to the convent:

Not only were the medieval clergy addicted to inebriety themselves, but they also appear to have encouraged it in their parishioners. The parson, for example, sometimes stocked his corn or actually carried out his brewing in the parish church, and sold the drink within its premises. Coulton has collected several examples of this practice, which was frequently condemned by the Church Councils. Moreover, the institution of Church Ales, which, as Coulton (1907) points out, was one of the chief sources of Church revenue before the Reformation, formed a powerful incentive to alcoholism. […]

Miss Eileen Power has shown that nuns as well as priests and monks were in the habit of visiting taverns as well as other sus-pected places. “ No nun,” she remarks, “ever despised good ale; only when it was valde tenuis did she object.” The opportunity of indulging their taste for liquor was offered the nuns by invita-tions to weddings and christenings, where they were much in demand as godmothers.
(From J. D. Rolleston: "Alcoholism in Mediaeval England", The British Journal of Inebriety, VOL. 21. No.2., OCTOBER, I933)

As evidenced by the many rules concerning beer making and beer consumption (and wine and spirits) laid out in the regulations of the orders and monasteries it is equally enlightening to look for the documented disputes revolving around alcohol and its distribution or availability:

At the Abbey of Saint-Victor (1261) quarrels had arisen about getting better wine and food; Eudes told the monks not to “grumble about this,” urged them to “live in charity with one another so far as they could do so,” and ordered the abbot to get better beer. Visiting at the abbey of Saint-Martin-de-Pontoise in 1257, Eudes notes that the monks there “have a certain chamber called ‘Bernard’s Room,’ in which they drink almost as much as they do in the refectory.” At the nunnery of Saint-Saëns in 1253, Eudes notes that one of the nuns was assisting the priest at mass (women serving at the altar was a practice the Catholic Church did not officially allow until 1994). In previous chapters we have seen the importance of monastic rules and collections of customs as evidence, but the Register is something different: it preserves a mass of detail about the regular, mundane interactions of real individuals in real communities in a known place and time, telling us not merely what someone thought monks and nuns should do, but what they actually did.
(From Sherri Olson: "Daily life in a medieval monastery", Greenwood Press: Santa Barbara, 2013.)

That said, an "alcohol abuse problem" is ill-defined today, as is almost everything labeled "abuse". What is the proper "use"? This label is carrying a puritanical moral judgement that is in its absoluteness and extremism inappropriate and counterproductive today. Applying it to medieval times and circumstances is wholly anachronistic on top.

Were the monks known for drinking much even being very frequently, very drunk? They were indeed. Did this cause any problems? It sure did. But the general concern at the time was about drunkenness and its consequences. Drink 8 bottles of wine and behave and there was no problem.

Not the answer you're looking for? Browse other questions tagged middle-ages england or ask your own question.

3
Middle east and North africa population during the high middle ages
12
Language in German cloisters during the High Middle Ages
32
Were there any high-ranking female soldiers during the Middle ages?
33
What is the date and original source of this medieval picture?
75
What drugs were used in England during the High Middle Ages?
9
How close would a peasant from middle ages England ever come to interacting with the king?
4
How often would monks leave their monasteries in the Middle Ages?
5
What authority did the Catholic Church have over European monarchs from 900–1450?