I participate in a Facebook group about the history of my hometown, Mechanicsburg, PA. We are trying to put a year on the following picture taken on the town’s annual street fair, called Jubilee Day. 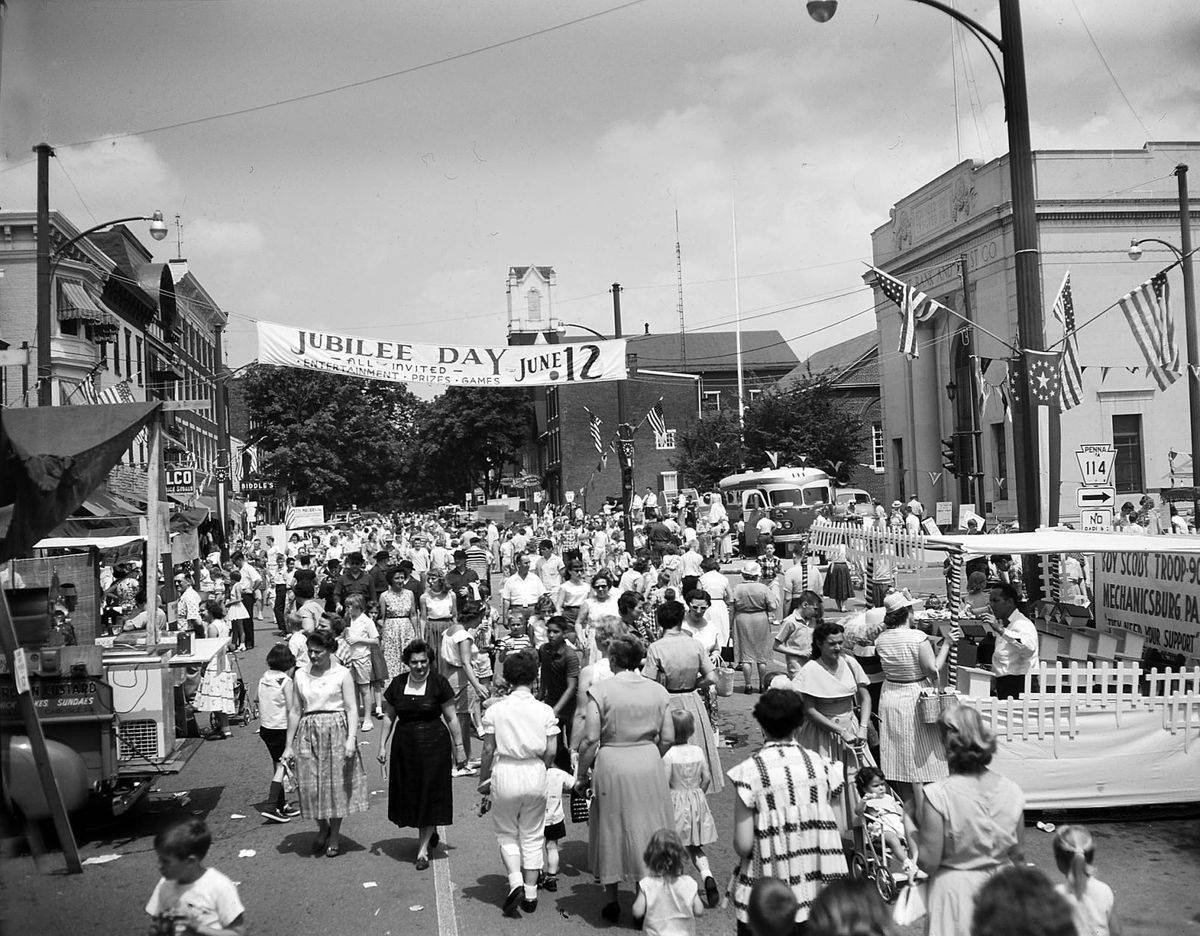 What I am hoping is that someone with more knowledge of the period dress and styles can pin it down further.

The other big possible clue are the two vehicles in the upper right corner. The bus is unobscured and looks very distinctive to me, so if anybody could identify its model and make, that would probably do it.

Here’s a blowup of the vehicles. 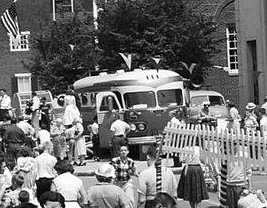 The many cues to observe:

Although it might be even higher resolution and a better scan: depth of field, focus, shadows etc point to an overall technology that's more late than sooner.

RBarryYoung: Ok, I am now pretty sure that the bus is a Flxible Clipper and not a Visicoach from the Flxible owners site. The last year they were made was 1950 and since there’s no destination plate on the front I assume that it is either a show model or privately owned. Based on its location, I think it on the plaza/sidewalk, not in a parking lot so that would mean it’s on display, which should make it new. I think that should make this then no later than 1951. 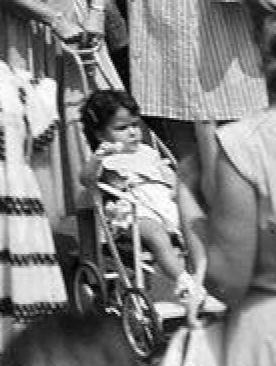 apparently a Columbia Tuk-A-Way
For comparison:

Source: VTG 1950's Columbia TUK-A-WAY Baby Stroller Westfield Mfg MOTHER Children's Ad Earliest date of manufacture? (If newspaper ads confirm that its 1954?) Note that it has been patented. Date for the patent?
kimchilover: The Tuk-A-Way dates to 1955 or earlier: see this 1955 ad, for instance: aditorial in Life Magazine 20 Jun 1955
Describing the cart as an innovation from "in the last two years" (but there seem to have been sturdier versions of the cart in question and "last two years" is imprecise and might mean publication date minus 2,99 years")
An earlier dated Photo is 1954 PRESS PHOTO TUK-A-WAY, using the same source material for a collage as the VTG picture. 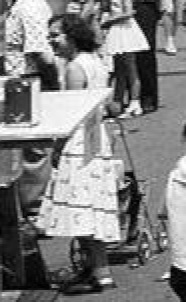 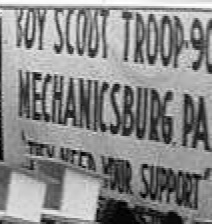 When were they founded?
What is this font, exactly? 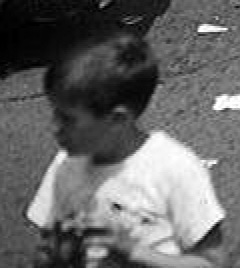 When did it became acceptable, when mainstream to wear this in public? 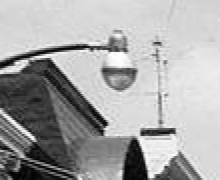 Distinctive style, introduced when, exchanged when? 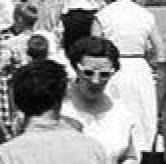 A lady exposing her shoulders and a boy wearing quite sloppy socks and (sneakers)? -> late 50s

The most fashionable lady yet.
Trousers, relatively tight, with slits, also in bobby socks, flat shoes, rolled up sleeves. Might be Capri pants:

Capri pants were introduced by fashion designer Sonja de Lennart in 1948. The name of the pants is derived from the Italian isle of Capri, where they rose to popularity in the late 1950s and early '60s
-> mid to late 50s

Quite an outlier for the rest of the scene:

a girl in what has to be identified as a miniskirt? That complicates things substantially.

Hemlines were just above the knee in 1961, and gradually climbed upward over the next few years. By 1966, some designs had the hem at the upper thigh. Stockings with suspenders were not considered practical with miniskirts and were replaced with coloured tights. The popular acceptance of miniskirts peaked in the "Swinging London" of the 1960s, and has continued to be commonplace, particularly among younger women and teenage girls. Before that time, short skirts were only seen in sport and dance clothing, such as skirts worn by female tennis players, figure skaters, cheerleaders, and dancers.

An approximation of the location with Google Earth: 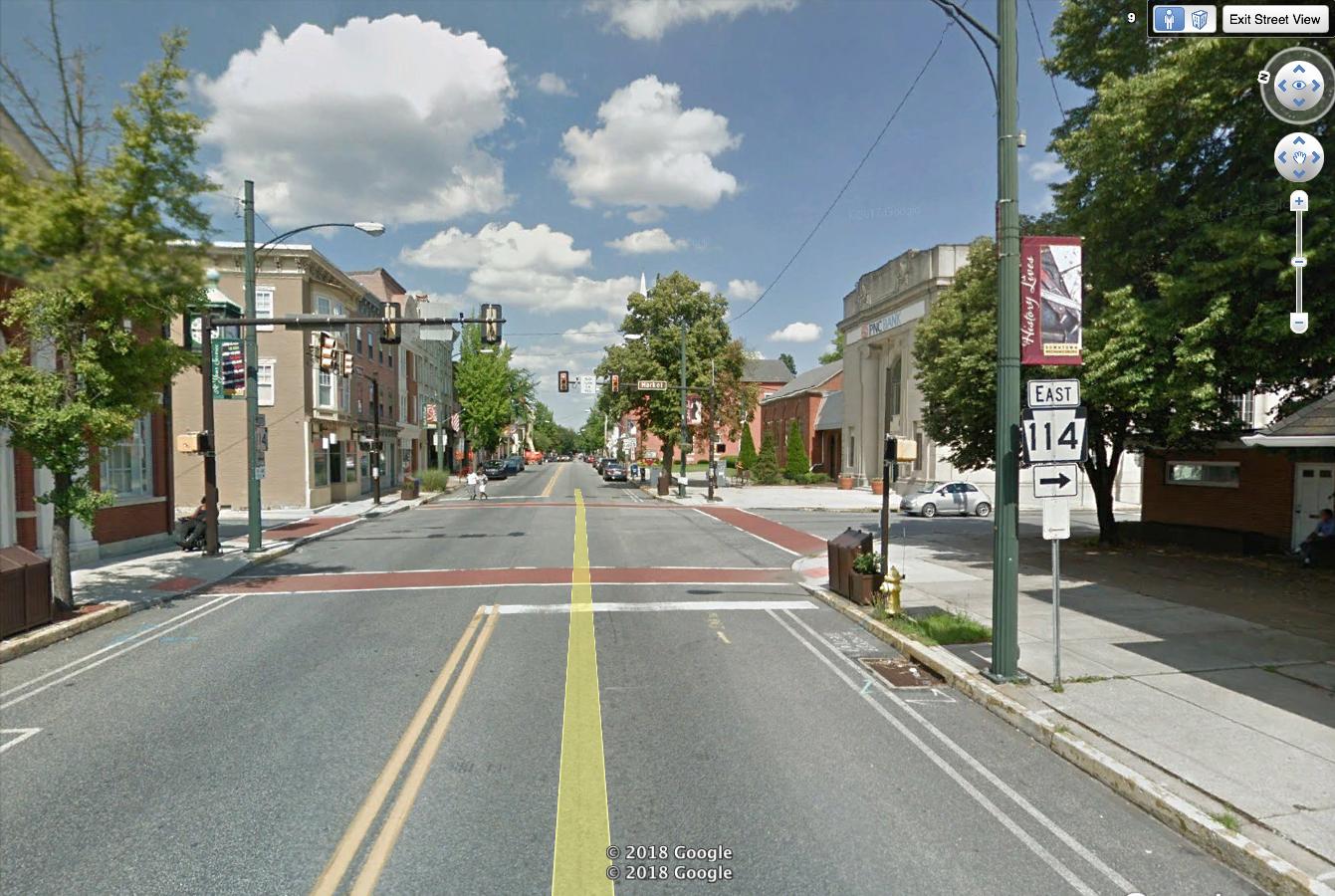 Compared to the above: the church has now a different top: 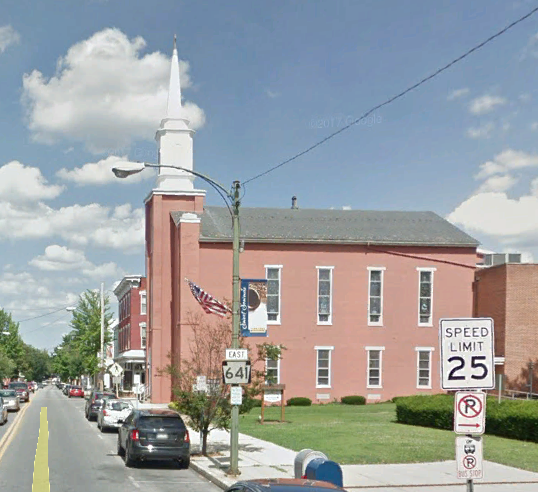 On the old picture there is a spire missing. when was that done?

Edit: According to this site, the steeple was changed in 1978, so no help there:

In 1978, The First Church of God, 28 E. Main St., Mechanicsburg, was receiving its new 4-ton, 42-foot-long steeple, which came into town on a flatbed tractor-trailer.

The vehicles might be a bit outdated, the women's fashion seem to firmly rule out late 40s and early 50s.

It was taken about 1970, if you believe The Pram Museum, since the baby stroller in the right foreground is a Columbia Tuk-A-Way (USA manufacturer).

Although, here's an ad for the same stroller reportedly offered in 1954. From the auto in the photo, that seems likley.

Not the answer you're looking for? Browse other questions tagged united-states 20th-century 1940s 1950s or ask your own question.

7
Where is the location shown in this picture on a modern day map?
13
What's the story behind this photo of hikers who brought white plague cure to President Wilson?
11
Who are all the people in this photo of the signing of the Civil Rights Act, 1964?
8
From what time can this jewelry date?
0
What is this complex in Colorado?
9
Which US naval ship from 1905 is depicted on this photo?
7
What is the approximate date of this photo?
5
Did teenagers in the USA in the 1960s and 1950s really engage in dangerous, reckless driving to this extent?