Is this quotation authentic (88mm versus Sherman)?

Have seen in several places a supposed quotation from a German WW2 battery commander or gunner, either in Italy or Normandy, to the effect that he ran out of shells before the enemy ran out of tanks (e.g. here).

I saw an interview on television with an 88mm gun commander deployed in an anti-tank role [...] He spoke about a column of tanks coming down his road, and knocking them out one after another at a kilometer distance. He said, "We ran out of shells before they ran out of tanks."

Am wondering if this is authentic, and what is the source?

The quote is not really implausible.

The Deadly 88 — Was the German Flak 18/37 the best gun of World War II? it is said that the Achtachter (Eighteight) was the deadliest weapon of the war, second only to the atomic bomb.

The best anti-tank gun of World War 2 was an anti-aircraft gun. The German 88mm flak gun never met a tank it couldn't kill. That large shell fired at very high velocity made the 88 the premier tank killer of the war.

Note also that the gun itself is not entirely stationary, but was also mounted on mobile vehicles or right into tanks.

If the quote is not only plausible but authentic, it alludes to the battle aroung Salerno in Italy. One of the guns in action there had the following killing marks: 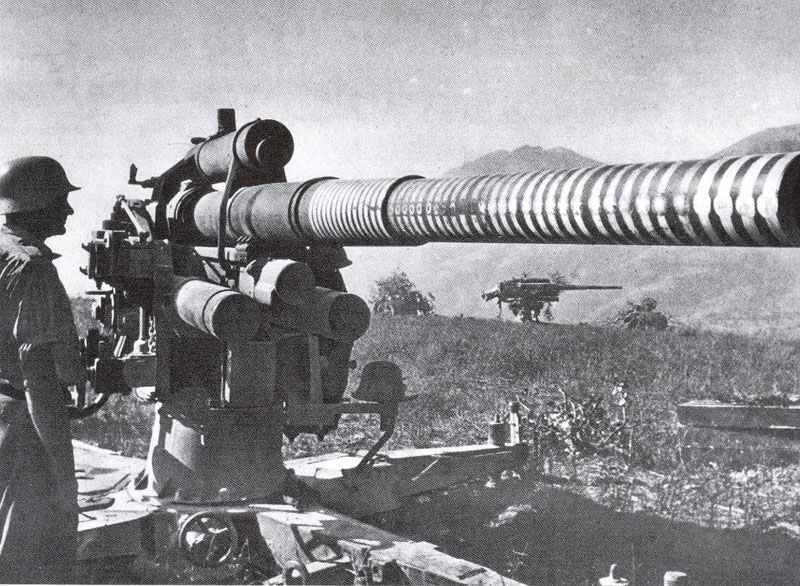 But very accurate that quote from above apparently seems also not:

This quote is amply found on the net then. In Douglas A. Macgregor: "Transformation Under Fire: Revolutionizing how America Fights" it even has a footnote attached to the quote, indicating that this sometimes qualified as "legendary quote from a German officer captured in Salerno" might be indeed real, but that page is inaccessible for me now.

Apparently the source for this quote is the personal memoir of David H. Hackworth stationed in Italy after the war as part of the occupation forces. It is found in David H. Hackworth & Julie Sherman: "About Face: The Odyssey of an American Warrior" , Touchstone: New York, 1990, p 274.

So it seems that the quote in question got a bit mangled. As it appears the source version of this quote has a number typo for the year when it was supposed have happened in Macgregor. Salerno battle was over in 43, and while a prisoner of war may be kept there in 44, the one person that claims to have directly spoken to 'the German lieutenant' seems to be Hackworth, stationed in Italy only after the war at age 15. As this is painted as a private exchange between two individuals it is either an authentic recollection or at least portrayal by Hackworth, or he made it all up by himself. It may be possible that Hackworth wrote this anecdote down earlier, only recycling it in his 1990 book. That the 88 was an efficient tank killer of legendary fame might have been inspiring in devising this story quote, but as far as the details go, Hackworth is very likely the source for it.

That he apparently did recycle this now famous story is apparent in that it also apears in his later book "Brave Men" (p163) and that his, Hackworth's story, is also quoted in Stewart H. Loory: "Defeated. Inside America's Military Machine", Random House: New York, 1973, p39 as well as in James M. Fallows: "National Defense, Vol 306", Vintage Books, 1982, p27.

It seems quite authentic over all. When it was first brought down onto paper currently eludes me.

Not the answer you're looking for? Browse other questions tagged world-war-two military tanks or ask your own question.

13
Are these Red Army uniforms authentic?
2
M4A1 sherman vs StuG III ausf. G — what were the odds in favor of the Sherman?
10
Is Himmler's memo about genocide authentic? Significant?
1
Where was this flag flown?
2
Does this CIA report describe the Soviet T-54 tank?
21
What type of plane is this wreck?
11
Can anyone identify this tank?
19
Is this a Sherman, and if so what model?
8
Any idea what type of 1920-1930s tank this is?
5
Was the M4 Sherman used frequently in artillery capacity?