What is the historical significance of pottery?

Pottery is often portrayed as being a landmark in the evolution of humanity. But do we just see it that way because it is one of the few things from those times that has survived in a tangible form? Before pottery did people have a more difficult time transporting liquids? Or were the containers before pottery inherently dirty and so the invention of pottery both cut down on disease and provided a medium on which art could be passed down to the modern day?

So was pottery an important functional part of society or do we just overfocus on it because it's one of the few things left around?

There are two sides to the importance of pottery: its place in the history of technological innovation and in culture, and its role in telling us about the past.

As a Technological Innovation and in Culture

Earlier peoples used lightweight, portable skin bags or woven containers made from inner bark of trees or reeds. Nomadic hunters and gatherers would not have wanted to carry heavy, breakable pots.

Pottery does not appear to have immediately emerged when people started settling:

In the absence of pottery, other vessels were carved from stone or moulded from ‘white ware’ (lime plaster).

The use of clay did not begin with pottery: clay figures date back as far as 30,000 years ago while the first pots are believed to have been made around 20,000 years ago in China. 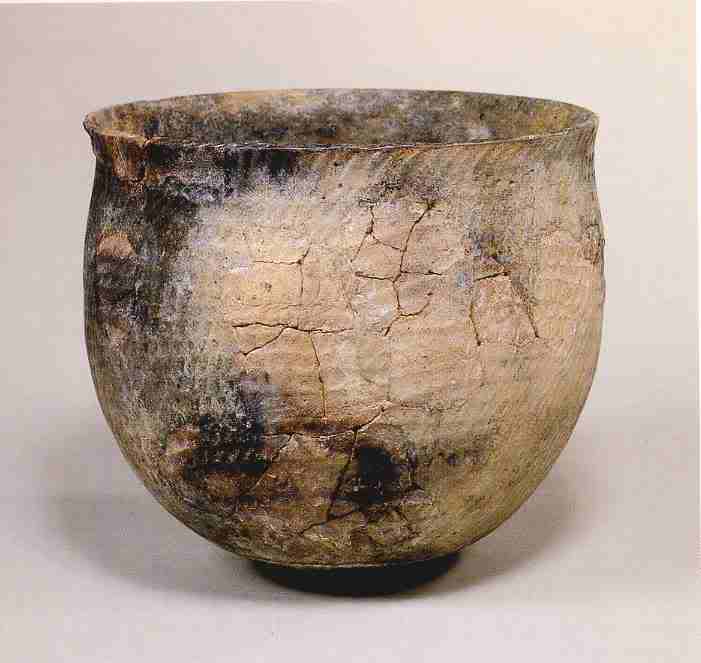 Pottery seems to have been independently invented in North Africa around 8,000BC and in South America around 5,000BC.

With the development of agriculture, pottery became practical as it

provided storage for foods and water, allowing for more seasonal versatility in Neolithic cultures and guarding against bad harvests.

In time, new functions for pottery were discovered, a key one being their use in commerce to facilitate the transportation of a wide range of goods. Skilled artists began creating images on pots which were made for decorative rather than practical purposes (though many served as both). As noted in The Importance of Pottery in Human Development, pottery had an important role

...in Ancient Greek and Roman civilisations. Particularly pertinent was the use of geometric designs and images to depict stories and events on pottery items.

In short, pottery played a huge role in most societies, in economic terms as well as in culture and society.

Telling us about the Past

Nava Panitz-Cohen of the Institute of Archaeology of the Hebrew University of Jerusalem sums this up neatly:

Pottery is both the bane and the blessing of the archaeologist’s work. On the one hand, it is often ubiquitous to the point of uncontrollability; on the other hand, it is this very trait that makes it so valuable for archaeological research. Pottery has played a role in determining just about every facet of archaeological study: chronology, ethnicity, trade, prestige, building function, social complexity, level of technology, gender, age, cultic activity, mortuary beliefs—in short, almost every aspect of human culture and behavior we can imagine. More than any other artifact, pottery tells us how ancient people interacted with their environment and with each other.

A critical role that pottery plays is in helping to date other artefacts discovered in the vicinity of the pot. Even the tiniest shard can allow archaeologists to pin often quite precise dates on other items. Also, the decorations on pots have told us much about the beliefs, lifestyles and lives of the people who bought them and used them. We can see the items people used in their daily lives, what they wore and what they ate. Evidence such as this often provides fresh facts

In our attempt to reconstruct the life of the past, each new representation of a scene from that life is important either in verifying our present knowledge or in supplementing it by fresh facts.

Pottery as evidence for musical instruments in Ancient Greece 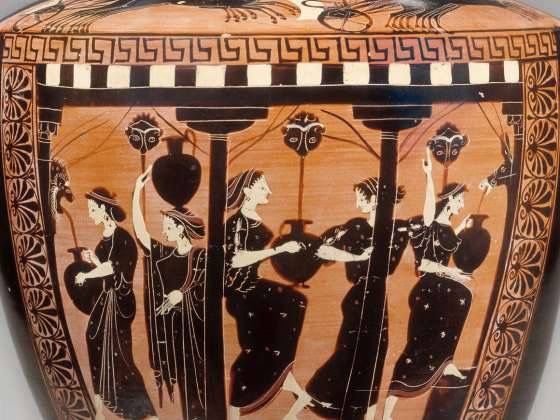 Pottery as evidence of daily life in Ancient Greece (circa 520-500 BC). This shows women getting water at a 'fountain house'.

In summary, I think it would be fair to say that the critical importance of pottery in archaeology, rather than leading historians to overestimate its importance, has enabled them to understand the importance of other items of past peoples’ lives which have not survived.

The Importance of Ceramics

Pottery is likely one of the easiest things to trace in early neolithic human history and has become a major route of linking cultures and proving early trade. Neolithic pottery is actually quite abundant (it survives the test of time quite well) and we can often trace a peoples movements and transitions of culture via their pottery.

Pottery is one of the first pieces of technology that emerges with urbanization (a 'city' provided both the need for pottery and the ability to create it). A pottery style is often unique to a culture and the (relatively abundant) pottery left behind gives good insight into which culture left behind the city ruins.

The best example I can give is from the Halaf-Ubaid Transitional period (https://en.wikipedia.org/wiki/Halaf-Ubaid_Transitional_period). When a culture or region transitions from one culture to the next...was it a gradual transition or was it abrupt? This answer can often be deduced from the pottery

A. L. Perkins identified the existence of a Halaf-Ubaid Transition phase that can be seen in ceramic assemblages. Sites like Tell el-'Oueili, and Choga Mami in the Mandali region were suggested as witnesses to this phase.

There was always a question of how one culture replaces another...in the Ubaid period, this transition is now thought to be a gradual adoption of one culture to the next as opposed to a violent overthrow and pottery is the number one reason we think that now.

Pottery can also link civilizations via trade as there is a good potential pottery was one of our species first trade goods. If culture A possesses pottery that is very distinctly theirs, but we find evidence of this pottery within Culture B's cities, then we can surmise that trade has occurred in some manner (or war/plunder) between these two cultures.

We can also link cities and culture that belong to like cultural groups by their pottery...when a city is uncovered, especially one dating back to 5000 BC and earlier, the abundance of pottery left behind becomes the easiest method of identifying the cultural grouping and period that the city ruins date to. Even a lack of pottery provides evidence of the period a people came from (PPNA, or pre-pottery neolithic A and later PPNB).

We've also used Pottery to distinguish ages, just as we like to use 'Iron Age' and 'Bronze Age', 'pottery' and 'pre-pottery' are used as terms to distinguish a period of time in human development prior to the bronze age (starting in the 12000bc range to around 3800bc). Oddly this period is often lumped into what we broadly call the 'stone age', though it's a distinct age and stepping stone towards the bronze age.

The best known, most characteristic pottery of Tell Halaf, called Halaf ware, produced by specialist potters, can be painted, sometimes using more than two colors (called polychrome) with geometric and animal motifs. Other types of Halaf pottery are known, including unpainted, cooking ware and ware with burnished surfaces. There are many theories about why the distinctive pottery style developed.

The artwork on pottery revealed insights about a culture and who they were as a people.

Pottery is often portrayed as being a landmark in the evolution of humanity.

Pre-historians use pottery to distinguish different cultures, and to date the cites of excavation. (So many pre-historic cultures are even named by pottery styles). The reason is simple: pottery is durable. Very little of other traces of material culture survive. On the other hand pottery is very common, almost universally used (since its invention) and comes in huge variety of styles.

Of course pottery was an important part of material culture: as storage and container for transportation of liquids and food. But the main problem is that other containers (made of fabric, leather and wood) rarely survive. That's why pottery is of principal importance for a pre-historian.

The historical importance of pottery is that with pottery, people could travel long distances, so there could be more civilizations. Also, it helps archeologists discover more about the past, for example with the Greeks' pottery, it can help with discovering the myths or every-day lives of people.

15
Is Josephus a legitimate historical text?
8
Organized crime as a historical phenomenon
18
What are the most comprehensive historical references for ancient India?
8
How far into the past was significance ascribed to the Golden Ratio?
7
Are there any sound historical proofs that Soma contained Cannabis?
20
What is the state of the art historical analysis of claims that Carthaginians discovered America?
16
Does the forearm grip/handshake have a historical basis?