Did German soldiers receive pay after the Allied invasion?

The German war machine was well organized, the logistics were quite accurate and I can only imagine that they also were quite on time with wages payment before the Allied invasion in France.

My question is: Did German soldiers receive pay after the Allied invasion of France in June 1944?

A deeper question is: Did German soldiers that survived the world war receive pay for their services and, if they did, what government payed them?

I think that D-Day could be a point were the government decided to direct all funds into the war effort as in weapons, food, etc.

If you are a totalitarian state in a total war setting, money is not that important.

In a market economy with other factors yes, paying salaries has effects in production. People want to buy new things, and capitalists/individual workers direct their effort to produce the things the public wants (food, clothing, building, enterteinment, transport, etc.) diverting that workforce and production means away from more "war-friendly" production.

It would not matter how many "money" the public had, Porsche or Volkswagen could not have decided on their own to stop producing military equipment in order to sell more private vehicles. And even if you were a company that had no direct orders about what to produce, you would not have access to the raw materials, and your workers would have been subject to conscription.

Some consumer goods were produced, of course, as people needed food, clothes and other basic stuff, but those would have been rationed so more pay would not have helped.

Of course as the war advanced and less and less goods were available to the public, that did lead to the logic inflation, as items at "official" price became scarce and black market did flourish; in a sense you could say that the state did cut the soldiers pay by creating the conditions for this scarcity and inflation, but without the public face loss of actually reducing the soldiers'pay slip.

And of course, DevSolar is right that "the turning point" was not D-Day and that a more relevant refence would have been the defeat at Stalingrad and the German reaction to it; if you want more precision the Sportpalast speech on 18 February 1943 is routinely quoted as the beginning of total war by Nazi Germany.

1And in fact almost all other countries involved, including those that were way more liberal and less in danger than Germany in 1944 did also enact rationing and government control of the economy in order to support the war effort.
Share
Improve this answer
edited Feb 21 '18 at 11:09
answered Feb 21 '18 at 10:08

The German state always cared for its soldiers and veterans. The soldiers were paid for as long as possible (long after June 44), receiving regular soldier's pay ("Wehrsold"). After the war they, and/or their relatives, received pensions and other benefits as soon as possible, as long as possible and as widely as possible, even exploiting loopholes in legal definitions; running contrary to publicly emphasised politics.

Let's start with the "deeper question":1

As for the regular pensions of regular Wehrmacht soldiers, the Allies – now after the war having the last word on everything regarding Germany until 1955 – had differing opinions on and arguments about that:

Colonel Gomme-Duncan: Does not the hon. Gentleman agree that these officers and men earned their pensions as soldiers before the war, and surely in every sense of justice are entitled to them? We should not expect the Germans to take away the pensions of our men. (15 March 1948 → Commons Sitting → Germany)

But the general agreement was reached that soldiers were entitled to pensions.

The actual pay during the war for active personnel was never in question at the time, from neither side.

After D-Day soldier's pay continued orderly and well into the last weeks of 1945. Although, as much as the organisational structure of Reich and Wehrmacht crumbled near the end, pay in terms of money became increasingly less useful.

Even though money was loosing utility near the end of the war and shortly after the capitulation, the Wehrsold was paid out with meticulous reliability. "As long as possible" mentioned in the introduction to this answer means, that as long as soldiers were attached to their organisational structure, Wehrsold was paid. This might be read as "right until the end in May 1945". In reality Wehrsold was paid even after that point: 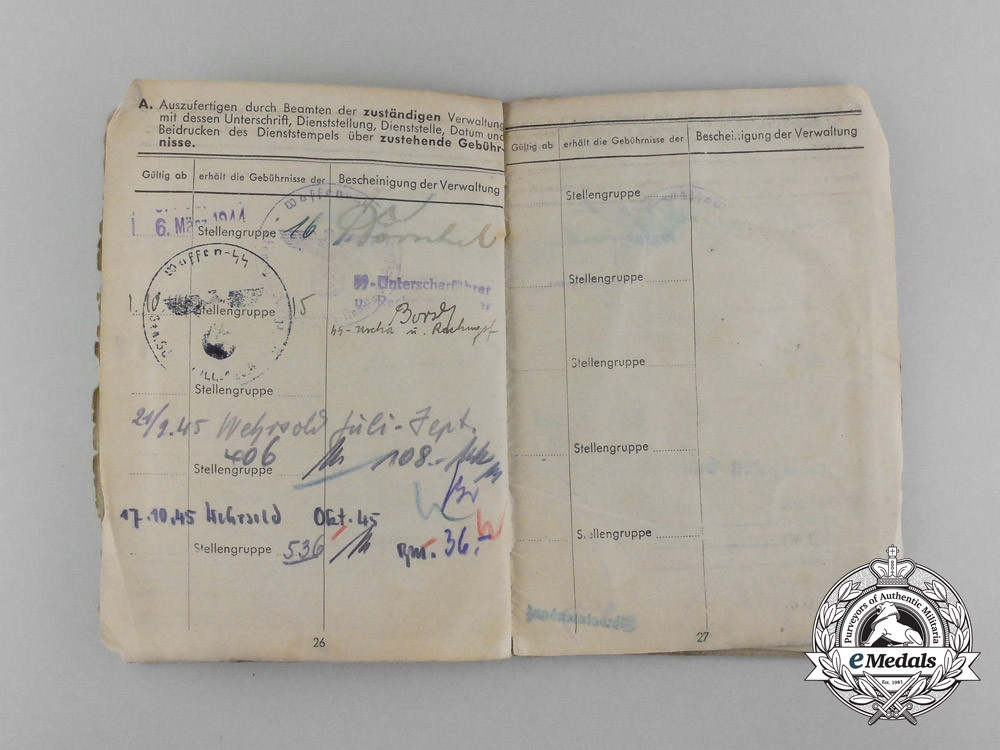 Showing that some individuals were paid for up until October 1945. This is no fluke. Although not the norm this applies to quite a number of soldiers. For this particular individual it was:

It finally surrendered to US troops near Vienna, Austria on May 5, 1945. It is possible that Woditsch was part of this division, if he joined them after recovering from his illness or injuries in time, and, if he survived the war, ended up as a POW of the Americans. Interestingly, he was still paid a salary of 36 Reichsmark in October 1945, indicating that he survived the war.

You might wonder how a soldier got his regular pay even after May 1945. The organisational structure of the Wehrmacht was not immediately and completely dismantled everywhere! After the unconditional surrender in the second week of May 1945 the German head of state Karl Dönitz continued a German government in Flensburg, very weakened and de facto without any much territory to control, trying to negotiate with the allies over some details. This ended only on May 23rd when all remaining troops surrendered and together with the officers were captured as prisoners of war.

The mystery of continued payments even after May 23rd, 1945 is explained in how British and Americans organised the adminstration of their "Disarmed Enemy Forces" (DEF) or "Surrendered Enemy Personnel" (SEP). After the Fall of Berlin English and American forces corralled German soldiers, but left them with a certain degree of self-administration. In the American sector:

The last remnants of the Wehrmacht were only dissolved in December 1945 and the Wehrsold stopped.

Returning to the pensions, still paid out: The currently official stance on pension claims and benefits is:

Die Zeit als Kriegsteilnehmer bei der deutschen Wehrmacht wird nach der Vollendung des 14. Lebensjahres als Ersatzzeit anerkannt.
(The time as a war participant in the German Wehrmacht is recognized after the completion of the 14th year of life as a time eligible to count for a pensions claim; the time in the army counts as compensatory for regular work time with associated contributions to the pensions fund.)
Info from an answer to a request to the official pensions institutions in Germany)

After 1956, every deed anyone did by order of the German Reich in officially recognised organisations or institutions was bureaucratically classified as regular work, eligible for pensions, even without the claimants having paid into the funds of solidarity otherwise required for that.

For more details on how and when pensions to soldiers were agreed upon and came to be paid after the war, cf.
Alaric Searle: "Wehrmacht Generals, West German Society, and the Debate on Rearmament, 1949-1959", Praeger Frederick: Westport, 2003.
The above is exclusively for West-Germany and unified Germany after 1990. The GDR handled things a little differently, and less generous. For these details:
Johannes Frerich & Martin Frey: "Sozialpolitik in der Deutschen Demokratischen Republik", De Gruyter: Berlin, Boston, 22014. (Some extracts on GBooks, p24f.)

1: This version of the answer was self-censored by the original author of this post due to popular request. A more detailed explanation is found in version 15 in the edit history. Do not go there and read that version if you are easily offended.

Yes, the German soldiers were being paid after June 6, 1944.

Consider the case of the Merkers mine, where most of the gold reserves of Germany, plus a lot of looted artwork and precious metals, plus a substantial amount of printed Reichsmark and the plates to print them, had been moved not long before the Reichsbank in Berlin (the normal repository for Germany's financial reserves) had been destroyed by bombing. Third Army overran this area and were told about the contents of the mine by French and Polish workers who had moved the contents into the mine. This prompted considerable interest from high command.

Eisenhower and Patton were touring the mine, guided by Col Bernard Bernstein, deputy chief of the financial division of SHAEF, who had been detailed to supervise the safeguarding and inventorying of the mine.

Bernstein also showed the generals the art treasures, plates the Reichsbank used for the printing of the Reichsmark currency, and the currency itself. While they were looking at the latter, a German official said that they were the last reserves in Germany and were badly needed to pay the German army.

So, yes, the soldiers were being paid in Reichsmark right up until the monetary reserves of Germany were captured.

It is my understanding that while the regular Wehrmacht soldiers were generally entitled to pay and pensions, members of the SS and Waffen-SS were not. The SS was declared a criminal organisation during the Nuremberg trials and so all payments and service was stopped at that point. Conscripts, after 1943, were exempt from the declaration of criminal activity.

Not the answer you're looking for? Browse other questions tagged world-war-two economy or ask your own question.

5
How was Australia able to start to demobilize in 1944?
6
In U.S. military forces, did black soldiers suffer a heavy racial segregation during World War II?
14
How did Allies secure southern flank during "Race to the Rhine"?
17
When was France fully liberated?
10
Was Italian production after August 1944 significant in the German war effort?
17
Was the act of servicemen exchanging their weapons for enemy weapons common during WWII?
23
Who was the most successful German spy against Great Britain in WWII, from the contemporary German perspective?
1
Were Allied high commanders that bad at the end of WW2?
2
How did the "weather conditions" for an invasion at Pas de Calais compare to those of Normandy?