Material Basis of the Golden Age of Bohemia

On a recent visit to Prague I was much impressed by the city's beauty and the number and splendor of its historic sites, such as Prague Castle, the Charles Bridge (a bit further afield Karlštejn Castle), its many stone towers, and lovely details such as the ubiquitous cobblestone streets.

The extraordinary richness on display reminded me much of Seville, Spain, which also possesses e.g. mighty palaces of the nobility and a huge cathedral. For Seville the main source of its extraordinary historic wealth seems clear: its location is where ocean-going cargo ships from the South American colonies were unloaded on the river Guadalquivir and where hence a lot of money was made and spent during the Golden Age of Sevilla.

Many prominent historic sites in Prague similarly date back to a Golden Age of Bohemia that began with the reign of Charles IV (1316 - 1378), Holy Roman Emperor and King of Bohemia. I am wondering what brought the Golden Age about overall in this case. The Czechs are an enterprising people and in Charles IV they had an enlightened ruler, but I assume there must still have been some economic fundamentals, perhaps in the form of raw materials or new crafts specific to the region, that allowed the king and the people to catalyze their own Golden Age, which still shines today.

So what was the material basis for the Golden Age of Bohemia?

My answer is only hinted at the following piece. http://en.wikipedia.org/wiki/Charles_I_of_Bohemia

But there is a key line that says that Bohemia escaped the Black Plague that affected much of the rest of Europe. That would be sufficient to attract "flight capital" from the rest of Europe seeking a "safe haven" from afflicted areas. Bohemia appears to be the beneficiary of such a phenomenon. Plus the fact that its kings of the period were generally regarded as unusually wise (in the manner of King Solomon). That is another attractor of investment capital, even to this day.

While Kutná Hora was producing silver, I don't think that this commodity or any other commodity (and surely not one stolen from a colony – colonies didn't really exist) was the main driver behind the glory of the Golden Era – although the silver was obviously needed for our hard currency, the Prague Groschen (picture below). The true reasons were organizational and political, I think, and the character of the economic development was modern and diverse. 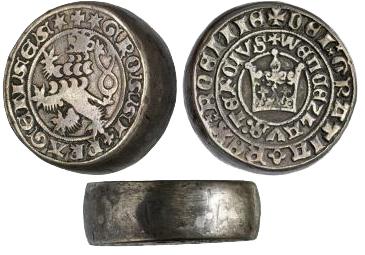 Charles IV (1316-1378) is considered by Czechs to be the most stellar ruler of our feudal history, due to the power he brought to the Czech kingdom and that was never quite repeated although Rudolph II who also ruled from Prague (but wasn't quite Czech...) came close (especially when it comes to his support of arts and sciences, something in which Prague has surely lost all of its prestigious status after Rudolph II).

One must understand that he wasn't just a Czech king. Since 1355, he was also an undisputed only Holy Roman Emperor (he was a disputed one, a de facto emperor, for many years before that) and during his reign, I believe the whole reign, Prague was the capital of the whole Holy Roman Empire.

This makes a difference because the Roman Empire has been the traditional brand for the modern type of wealth. You may appreciate how much Vienna has benefited from its being the capital of the Austrian monarchy for many centuries. Similarly, Brussels may have some extra advantage by being the capital of the confederation known as the EU: lots of business revolves around the politicians and administrators. However, being a capital of the Holy Roman Empire might have been an even bigger deal. I suppose that some "taxes" were flowing to Prague from the whole empire.

There were various accidental reasons that made this privileged position of Bohemia possible. However, Charles IV improved the political clout of Bohemia by various mostly peaceful acts, especially acts like clever marriages. For his Bohemia where he was a king and which was therefore the "core" of the Holy Roman Empire, he acquired lots of unusual territories in East Germany, big portions of the current Poland, and elsewhere. At one moment, Bohemia almost had access to the Baltic Sea (see the map below), and so on. Be sure that throughout most of our history, we couldn't consider ourselves to be expansionist colonial masters of any sort so this exceptional era fills us with a certain pride (well, much like the Hussite Wars a century later – Hussites are admired even by many conservative Czechs although they were essentially communists, terrorists, and heretics combined into one). 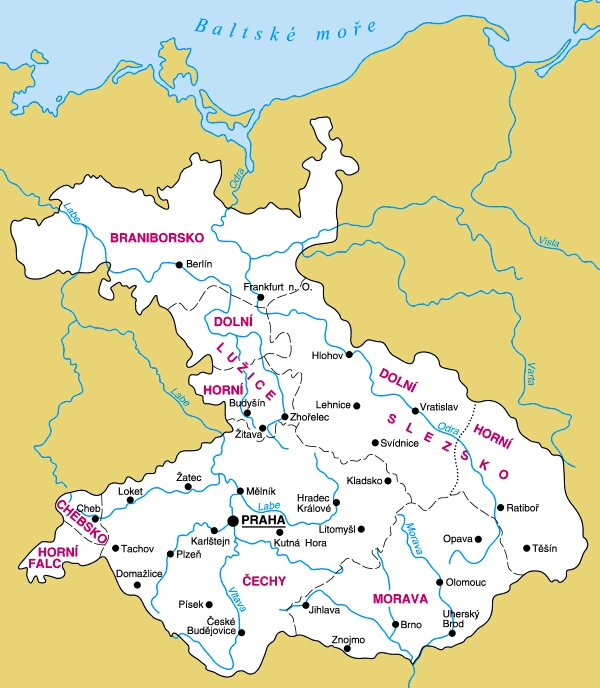 Note that Berlin was one of the cities in the Czech kingdom and all the major cities have had nice and smooth Czech names.

Internally, Charles IV was a great manager. Especially in Prague, he knew how to support construction of new buildings and infrastructure that was meaningful and profitable for the kingdom as a whole. He founded the Charles [himself] University in 1348, built the New Town neighborhood, the Charles Bridge, the initial stages of the St Vitus Cathedral, the Karlštejn Castle, and other things. Prague would be upgraded from a diocese to an archiepiscopate. He often declared contests – I mean tenders – who is able to build something quickly. Marketplaces were actively managed and timing was important.

It's plausible that the climate was more friendly – i.e. warmer – at that time, too (the so-called Medieval Warm Period). It may have helped although it's hard to decide or quantify it. Charles IV switched Bohemia to "wine drinkers" and wine must have been routinely grown even at places of Bohemia such as Prague itself (note there is Charles-IV-founded "Vinohrady" = "Wineyards" neighborhood over there) where it seems implausible today. Of course, one can't be sure whether it tasted really well and whether it was sweet enough. There were also some protectionist policies against wine importers. 10% of the sold wine went to the landlord and each winery had to send 30 liters to the king, too. ;-)

Prague was the 2nd largest European city in that time and relatively speaking, the kingdom was doing very well. I am not sure whether the Golden Era was so supernaturally golden in the absolute sense so that one would have to search for some particular material cause of it.

The best answer to the question that I have been able to come up myself so far points to silver mining e.g. in Kutná Hora, another UNESCO World Heritage property in the Czech Republic, from the the 13th and 14th centuries ("Kutná Hora is therefore rightly considered to be the treasure-house of the land whose wealth gave strength to the expansion of the Kingdom of Bohemia").

I remember reading David Graeber on that "there was a sudden burst of silver mining in Saxony and the Tirol" in the 1460s (most of which would ultimately be shipped off to China). Those two regions did not experience own Golden Ages to my knowledge, so that could suggest that silver mining is at best a necessary but not sufficient condition for the Golden Age of Bohemia. (On the other hand, I believe both regions were also parts of the Holy Roman Empire at the time when Prague became its capital with Charles IV's imperial election.)

103
Why was Poland spared from the Black Death?
8
What were the consequences of the bankruptcies of the Spanish Empire?
12
Typical fortifications around major cities in the 18th century
6
What was the Nature of Resistance in 1938 Czechoslovakia?

17
When did the Holy Roman Empire collapse?
11
How did Magnus IV of Sweden come of age at 15?
7
Was Willem the Silent Dutch?
4
Was it Bismarck who said: "He who is master of Bohemia is master of Europe"?
4
What was the prevalence of ethnic minorities in 15th century Bohemia?
16
What were the conditions of joining or leaving the Holy Roman Empire?
3
Why is the flag of Prague yellow and red?
4
How were the territories added to (and thus the limits set in) the Holy Roman Empire
12
Where was the County of Thurn und Taxis located?
6
Was there ever support for any persons outside of the empire to be elected Holy Roman Emperor?