Were there inns and hostels in medieval Europe?

In fantasy novels or roleplaying games it is very common for the characters to stay a night at an inn, hostel or tavern. But I'm curious of what it was like for real in medieval times. I'm particularly interested in Britain, but any references to other parts of northern Europe are interesting as well, like France and Germany, or eastern Europe for that matter.

I know that in Roman Britain they had, so called mansio that were run by the Roman government and meant for Roman officials, like tax collectors, to stay in on their travels to the far reaches of the Empire. Some of these even had bath houses.

But what happened after the Romans left, and we enter the so called "Dark Ages"? During Anglo-Saxon times the feudal system started to rise with Jarls and Thegn, but how much freedom of travel did people have in this period, and was there any need for travel? Didn't most people have a farm to take care of and lived a mostly self-sufficient life? I guess there were markets and fairs now and then where they sold surplus produce (if any) and that required some amount of travel.

In Norman times after 1066, weren't most villeins bound to their village in the Manor, and only a few freemen where allowed to leave the manor and travel? So how much need was there for inns and hostels and would there be enough travelers to make it a viable business? I suppose nobles had more liberty to travel, but would they settle for an inn in a village or would they rather stay at another noble's manor house or castle?

Did this change later during the period? The middle ages spans almost 1000 years so I suppose a lot of things changed during this time? What about during the Plantagenet dynasty and the Tudor period?

After the black death and the Peasants' Revolt in 1381 I can imagine that the travel ban was not so strictly enforced, and perhaps foreign trade had increase by now so that there were more merchants in the country, doing a lot more traveling.

In the Mediterranean world hostels seemed more common; even the Bible mentions an inn in the Parable of the Good Samaritan, where a Samaritan takes a wounded traveller to an inn and leaves him there with a few coins for the innkeeper to take care of him.

But the restriction on commoners by the feudal system in northern and eastern Europe seems to have made traveling more difficult and thus lodging a rather uneconomic business. Am I right?

Yes, there were, but information on inns and hostels before around 1300 is patchy at best and the evidence suggests that, for the early middle ages, travellers were often given board and lodging by locals, especially those higher up the social hierachy. After 1300, though, there are an increasing number of references to inns and hostels as well as some physical evidence.

DETAILED ANSWER (this mostly, but not entirely, chronological and refers to England unless otherwise stated)

Evidence of inns or hostels in Anglo-Saxon England and among the Norsemen is limited. In part, this may be because there were few of them as there was little need in many places (see below, although it is hard to imagine that there weren't any inns or hostels in major urban areas such as London, Paris and Rome). There were fewer travellers than in later times and the custom in Scandinavian and Anglo-Saxon societies was to provide food and lodging for travellers. In Icelandic society at least,

hosts [meaning everyone] were expected to generously welcome and provide food and shelter for passing travelers…guests were likewise expected to be polite…and sometimes even reimburse them in the form of goods, services, or labor.

hospitality was always a duty, strictly limited and framed by custom. It may have been provided to a single traveller, to a member of a formal or informal network (particularly ecclesiastical), to a king or to his agents

This 'system' of hospitality was, in all likelihood, fairly widespread and dated back many centuries. Tactitus (c. 56 to c. 120 AD), in Germania, writes that:

It is accounted a sin to turn any man away from your door. The host welcomes his guest with the best meal that his means allow....No distinction is ever made between acquaintance and stranger as far as the right to hospitality is concerned.

Nonetheless, at least some Anglo-Saxons were not unfamiliar with hostels. Clear evidence of hostels in Rome is found in the Anglo-Saxon Chronicle where there are

several references in ninth-century entries to the “ongelcynnesscole” (“Anglo-Saxon quarter”) in Rome, where English expatriates and visitors could stay in an English hostel or worship at an English church.

Although one might expect enterprising individuals to set up inns in areas where there was a demand, this does not appear to have always been the case. In early 12th century Norway, King Eystein I (reigned 1103 to 1123) set up a hostel in Dovre because,

As visitors such as craftspeople and merchants came in increasing numbers to Bergen, the traditional hospitality that travellers could normally expect would no longer suffice

A statute of King Edward I of England in 1285 mentions the ownership by foreigners of, among other things, hostels and inns; later, foreigners were barred from owning such establishments along the River Thames.

According to John Hare in his book Inns, innkeepers and the society of later medieval England, 1350–1600, inns "were a crucial part of the economic infrastructure of the country". Also, Phillipp R. Schofield, in Peasant and Community in Medieval England, 1200–1500, states

By the close of our period [1500], village inns and hostelries were establishing themselves as permanent features of the countryside.

This article, which uses Compton Reeves' Pleasures and Pastimes in Medieval England and Life in a Medieval Village by Frances & Joseph Gies as sources, states:

The inn of a town was usually located in a central location such as the town square, or in places where trade roads met. In France and the Holy Roman Empire, coach-inns also became important drivers of the economy – these coach inns were mostly found on big trade routes between distant locations.

As inns became more common in the 14th century, they began to put up signs (with pictures, for many people were illiterate) as a way of advertising themselves. By the time of Chaucer (at least), one could find a wide range people when one walked into an inn or tavern. In addition to adventurers, among them were

Unsurprisingly, the physical evidence of these establishments has mostly vanished but there are a few which have survived, at least in part. One such is in Paris, established by Nicolas Flamel (“today immortalized as an alchemist, thanks in part to J.K. Rowlings’ Harry Potter series”) in 1407 as an early charity to cater for itinerant workers. 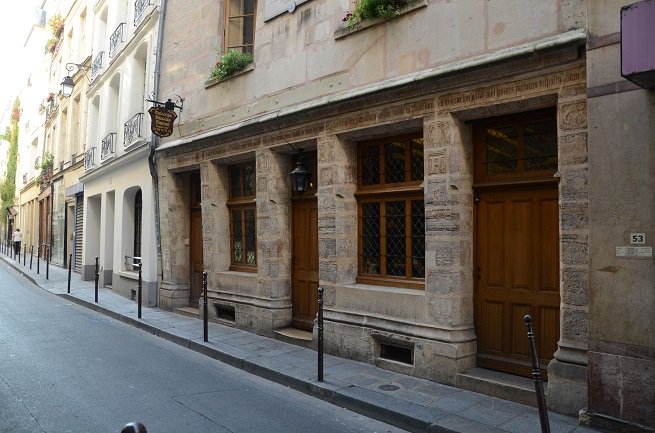 Exterior of the Auberge Nicolas Flamel

Also in France, another example of a hostel was at Cluny monastry:

Adjoining the gatehouse was a large building that held the stables and a hostel for travelers, with adjacent latrines.

In England, The Angel Inn in Andover (Hampshire) has been in operation since at least 1456 in the current building (built between 1444 and 1455, although the facade is much more recent). Another example is The New Inn in Gloucester, built in 1450. 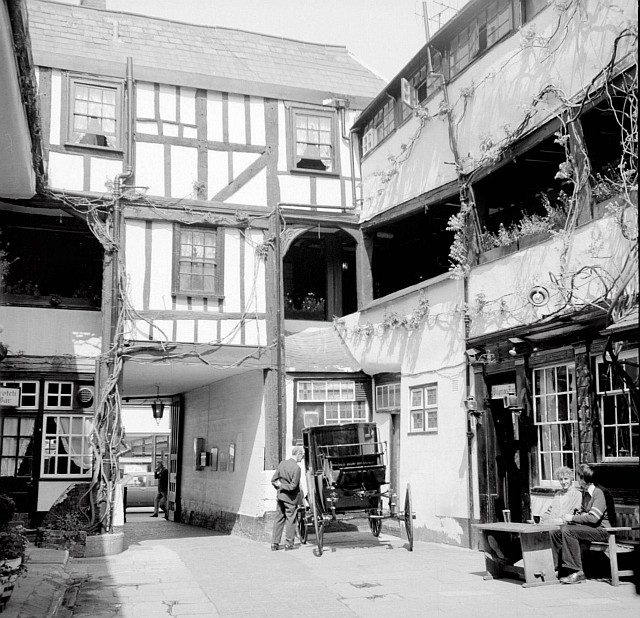 As to profitability (in the late medieval period at least), this abstract on Hare's book states:

Inns generated substantial rent and were evidently felt to be worth considerable investment. Innkeepers were among the rich and influential members of the town.

As European economies grew, there were increasing numbers merchants who needed a place for the night (business travellers, if you like). Pilgrims were, in some places at least, a source of profit sufficient for local authorities to target for for taxation. In Italy, for example,

At Siena on the Via Francigena in Tuscany, a special levy was exacted from innkeepers who stood to profit from the flow of pilgrims.

Source: D. Webb, Pilgrims and Pilgrimage in the Medieval West

Some of the early lines of Chaucer's prologue to The Canterbury Tales (circa 1386), tell of The Tabard inn in Southwark, just south of London Bridge.

In Southwerk at the Tabard as I lay
Redy to wenden on my pilgrymage
To Caunterbury with ful devout corage,
At nyght was come into that hostelrye
Wel nyne and twenty in a compaignye
Of sondry folk, by aventure yfalle
In felaweshipe, and pilgrimes were they alle,
That toward Caunterbury wolden ryde.
The chambres and the stables weren wyde,
And wel we weren esed atte beste;
And shortly, whan the sonne was to reste,
So hadde I spoken with hem everichon
That I was of hir felaweshipe anon,
And made forward erly for to ryse
To take our wey, ther as I yow devyse.

Nevill Coghill's very liberal translation of that passage into modern English is as follows:

It happened in that season [April] that one day,

In Southwark, at TheTabard, as I lay

Ready to go on pilgrimage and start

For Canterbury, most devout at heart,

At night there came into that hostelry,

Some nine and twenty in a company

Of sundry folk happening then to fall

In fellowship, and they were pilgrims all

That towards Canterbury meant to ride.

The rooms and stables of the inn were wide;

They made us> easy, all was of the best.

And, briefly, when the sun had gone to rest,

I'd spoken to them all upon the trip

And was soon one of them in fellowship,

Pledged to rise early and to take the way

To Canterbury, as you heard me say.

The fictional pilgrims as they journey to Canterbury agree each to tell two tales. One supposes that they stayed at other inns, such as the Tabard, in the Borough High Street near London Bridge. It had begun operating in 1307, and unfortunately it is not still there today but this will tell you a little about it, with a picture of how it looked in 1850. This is of course a much later building on the site.

Whether it was typical of inns of its time I know not.

Not the answer you're looking for? Browse other questions tagged travel feudalism inn lodge or ask your own question.

19
What's the correct term for a waitress in the Middle Ages?

24
When did Hinduism forbid overseas travel?
8
What was the typical range of travel of a Pennsylvanian resident for everyday life in the late 18th early 19th Century Pennsylvania?
14
Was hitchhiking common in ancient Rome?
8
What were the traveling practices of merchants, roughly between the Middle Ages and the Renaissance?
6
Are fiefdoms near the Capital assigned to trusted allies or the opposite, and why?
31
How did medieval manors handle population growth? Was there room for more fields to be ploughed?
9
How were de jure lands determined during the Middle Ages in Western Europe?
3
Why did wagons in the frontier era travel at night?