A tonfa is a forearm length club with a handle protruding sideways. A common claim is that the weapon was originally a handle used to turn millstones. German Wikipedia claims that there are pictures and texts that prove the millstone story - without providing internet accessible sources

There's lot's of uncertainty regarding the origin of the Tonfa.

So to answer the question of whether tonfa could be reasonably developed from millstone handles, I want pictures and text of likely candidates for these mills and how a tonfa shaped object might fit in.

An article which studies the The History of Grinding Implements for the Domestic Use in Japan has several images which show tonfa style parts. One style in particular can be traced to both Rome and China:

Fig. 5 (b) Rotary quern of Rome and China of Han Dynasty.

A hammer-shaped pestle from the same article: 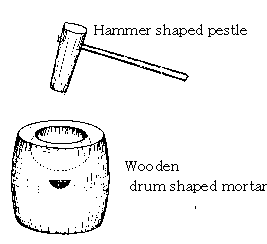 Not the answer you're looking for? Browse other questions tagged japan china technology weapons or ask your own question.

52
When were swords last used in European warfare?
17
How were dagger axes used in battle?
5
Were there biological weapons used in WW1?
4
Were slings used as melee weapons?
4
Were crossbows used by the Japanese?
11
Why were swords used in battle?
18
Language used on a dagger hilt, supposedly of Persian provenance, ca. 1700-1750
10
Lenin Jacket Picture: What's the story?
4
Why were air rifles not used more in combat?
4
How heavy were the heaviest war hammers actually used?