What is this card, and why does it go “on the hat”?

This document is from the papers of a family whose ancestors immigrated from Germany to the United States in the late 19th century: 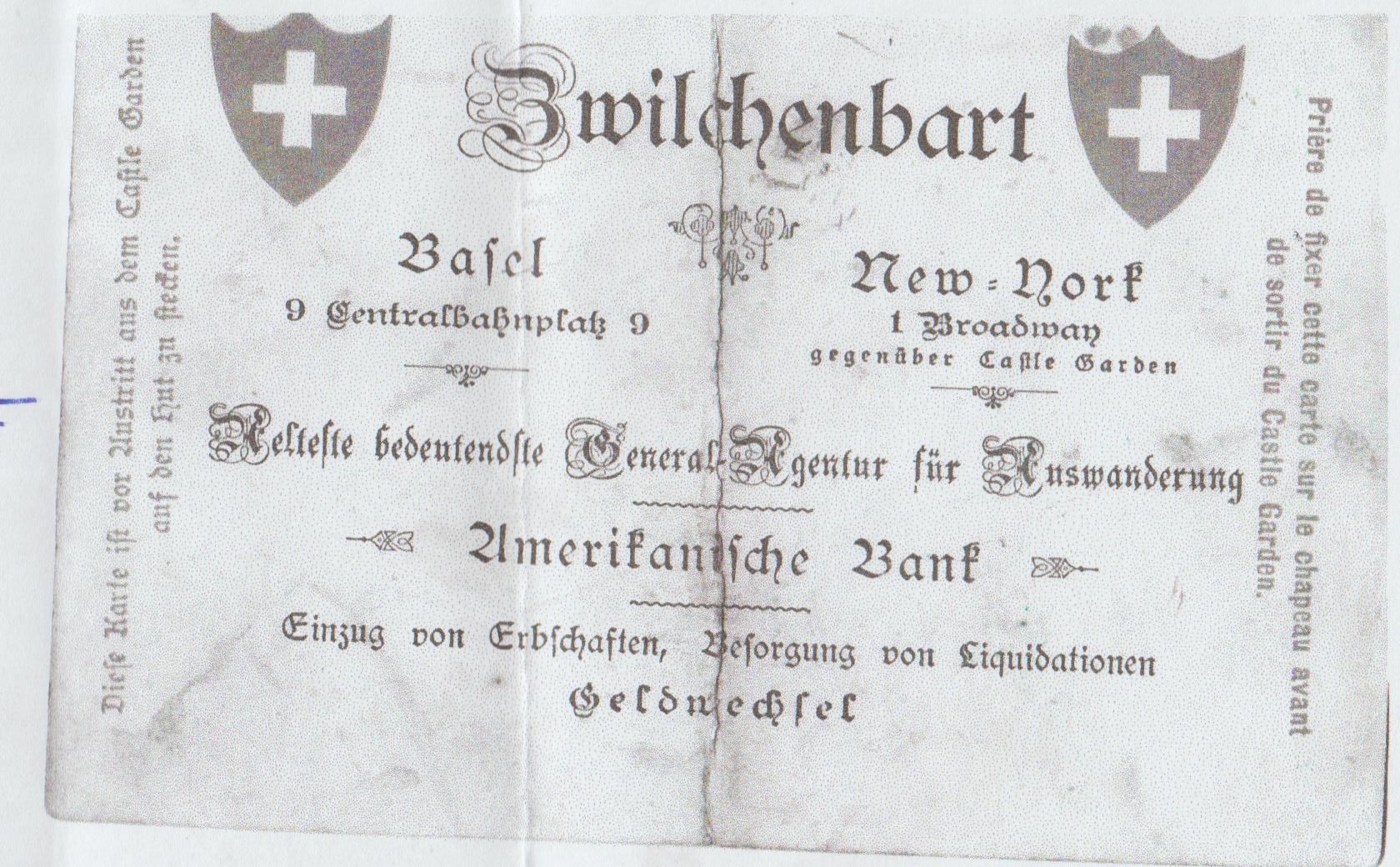 and then on the sides, in German and French:

Zwilchenbart is the name of a bank in Basel, about which the U.S. consul in Basel writes in 1900:

It has been for very many years occupied with the transportation and with the financial arrangements of travelers, tourists, and emigrants.
(source)

This fits with the card's characterization of Zwilchenbart as "[The] oldest [and] most important general agency for emigration" (my translation).

However, I don't see anything that says what this card is for. The bilingual instruction on the side only puzzles me more:

This card is [for one] to stick (pin?) on [one's] hat before leaving Castle Garden.
(my translation of the German)

Castle Garden was New York's immigrant processing center from 1855 to 1890. The card indicates that Zwilchenbart has a bank branch opposite Castle Garden.

My best guess is that the card is a bank membership card, but if so, I'm puzzled that it seems entirely generic and doesn't bear any information about the account holder. What is this card for, and why are immigrants instructed to attach it to their hat?

The evidence you have presented suggests that the card is meant to assist a Zwilchenbart customer in getting to the branch in New York upon arriving in the city. Presumably the customer has deposited funds with the bank in Basel, and will have need to collect some of it, in American currency, immediately after clearing the immigration facility. The Battery Park area was large, so "opposite Castle Garden" was probably not as simple as "across the street".

The customer probably was carrying separate documents detailing the account. This card, when displayed in the customer's hatband, serves to identify him to bilingual bank representatives stationed by the immigration exit as a customer of the bank, and they can then accompany or direct him to the bank. The first steps after arrival in a new country would not have been easy, and this bank clearly focuses on customer service to ease the difficulty.

Not the answer you're looking for? Browse other questions tagged united-states immigration modern switzerland or ask your own question.

2
What does 'trade in' mean in this article on the Westway project?
6
What rights did women have in Switzerland in the first few years of the 20th century?
1
What does MLK mean by “lonely island” and “vast ocean”?
19
A German immigrant ancestor has a “Registration Affidavit of Alien Enemy” on file. What does that mean exactly?
13
What profession(s) would have used this folding 'ruler'?
7
What does this Swiss banner/blazon/coat of arms/flag stand for?
5
Can anyone identify what uniform this child soldier from Switzerland c1870 is wearing?
0
What does the crested logo with a stacked “A C and I” on this Baldwin-Felts certificate mean?