How would a Spartan have held his shield?

I am astonished at the weight of a Spartan shield, which I have read would have weighed 30 lbs (13.5 kg). This is, of course, extremely heavy for most people. 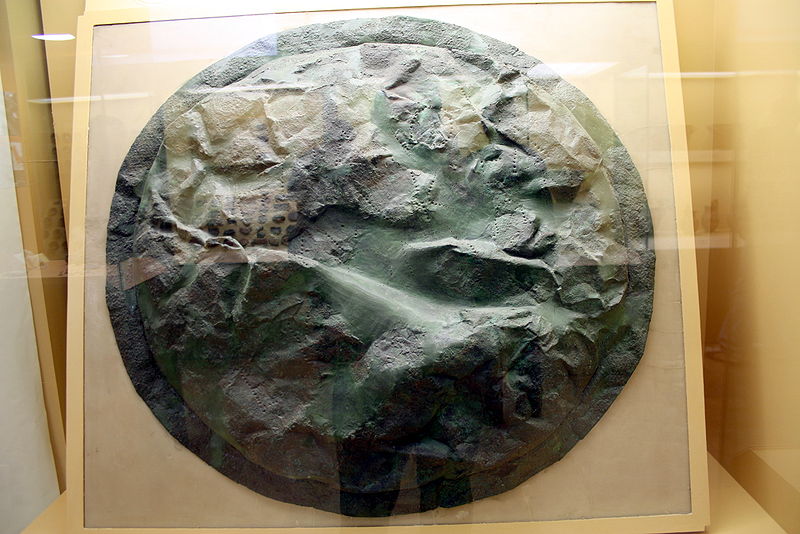 Ergo, it raised the question for me: would those shields have to have been held for the length of a battle (all day) or would there have been periods of rest whereby a soldier could put their heavy shield down?

How long would a Spartan have had to endure holding a shield for?

Most battles were short and thus the shield did not have to be held for long in combat. Also, Spartans who survived the training which began in early childhood were extremely tough both physically and mentally. Lastly, most historians of ancient Greek warfare have estimated that the shield used in classical times weighed between 13.5 lbs / 6.12 kgs and 18 lbs / 8.16 kgs (i.e. 30 lbs is most likely an extreme limit, if not an exaggeration).

Most battles were decided essentially within an hour

The actual fighting typically started no earlier than late-morning, after breakfast had been taken (which was mid-morning) and sacrifices made. The soldiers (hoplites) would march into position and there would be speeches exhorting them to be brave and fight well. Up to this point they would not have been holding their shields in front of them but rather resting them on their knee when stationary or carrying them on their shoulders when moving into position (see walrus' excellent and detailed explanation on this). They would only have to start holding them in front of them with the full weight on the arm when they advanced towards the enemy line.

"Marble base of a funerary kouros" showing hoplites (left side) on the move with shields carried on the shoulder, rather than in front of the body as they would be if in battle. Source: NATIONAL ARCHAEOLOGICAL MUSEUM, HELLENIC MINISTRY OF CULTURE & SPORTS

Battles between hoplite armies usually involved (to put it simply) a lot of shoving and pushing until one side gave way (and it wasn't usually the Spartans), and some of the weight of the shield would have been taken by whatever or whoever it was pressed up against. Further, only soldiers within reach of enemy spears have to have held their shields in front of them. In short, they would not usually have had to support the full weight of the shield on their arm for an extended period of time. 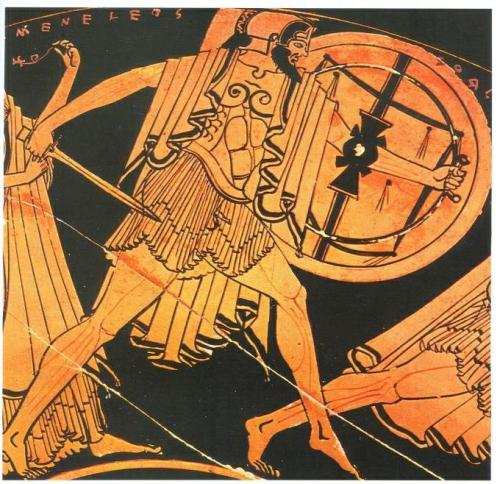 This vase shows clearly how the shield was held using the hand and the forearm Source: The Hoplite Shields - Periklis Deligianis

Spartan fitness and training obviously counted in their favour in longer encounters as their opponents usually tired first (see below). Sometimes, Spartan opponents withdrew without engaging due to the reputation of the Spartans - in other words, 'real' combat could be over in a matter of minutes, if it even happened at all. At Mantinea in 418 BC, for example, many Athenians and Argives

did not even wait to come to blows but immediately gave way as the Spartans advanced and there were some who were trampled in their haste to avoid being caught.

After the battle line of one side gave way, there would usually be a general rout but hoplites rarely pursued the fleeing enemy far: the mopping up was left to the cavalry and light infantry.

One notable exception to the customary short battle was Thermopylae (480 BC). In this encounter with the Persians, the front line was rotated to give everyone a rest.

Spartans underwent rigorous training from the age of 6 or 7 in the agoge. They had to be extremely tough both mentally and physically to survive it. A particular emphasis was placed on enduring hardship. Thucydides wrote

Spartans holding a position will fight long and stubborn battles until they rout the enemy, but once they have done so they do not pursue them for any great distance nor for long.

This 'toughness' invariably meant that Spartan hoplites would win in the end, if for no other reason than endurance. Hoplites of other Greek city states were rarely able to match the Spartans in this regard (among other things) and thus, even if they were able to hold their own initially, they would almost always tire before the Spartans. They did not get anything like the same training and (excepting, at different times, Thebes - the Sacred Band - and Argos) did not have full-time professional soldiers. This uneven match made it more likely that battles would be short.

Nonetheless, even Spartans recognized that holding a hoplon for long periods was tough: one form of punishment they used was to have the offender stand guard all day holding his shield.

A final point here is that, when on the march (except immediately before battle), helots were often used as porters, carrying soldiers' equipment. Thus, the hoplites' strength was saved for the 'main event'.

Concerning the weight of the shield, we can't be sure exactly and shield designs changed over time. I've seen estimates ranging from 13.5 lbs / 6.12 kgs to 30 lbs / 13.61 kgs, but Hansen (in Hoplites) cites the work of several experts, none of whom estimate the weight of the hoplon at more than 18 lbs / 8.16 kgs, and Sekunda (in The Spartan Army) is also within this range. Estimates for the total weight of shield, body armour and weapons are in the area of 70 lbs / 31.75 kgs so the hoplite had much more than just the weight of his shield to bear.

Also, these shields were used primarily to form a protective wall in formation; they were not designed to be swung around (as you often see in the movies), something which would have quickly tired even the strongest Spartan soldier.

Lars' answer has addressed the fact that the shields (know as a hoplon) often didn't need to be held for long; I'd like to address the actual mechanics. 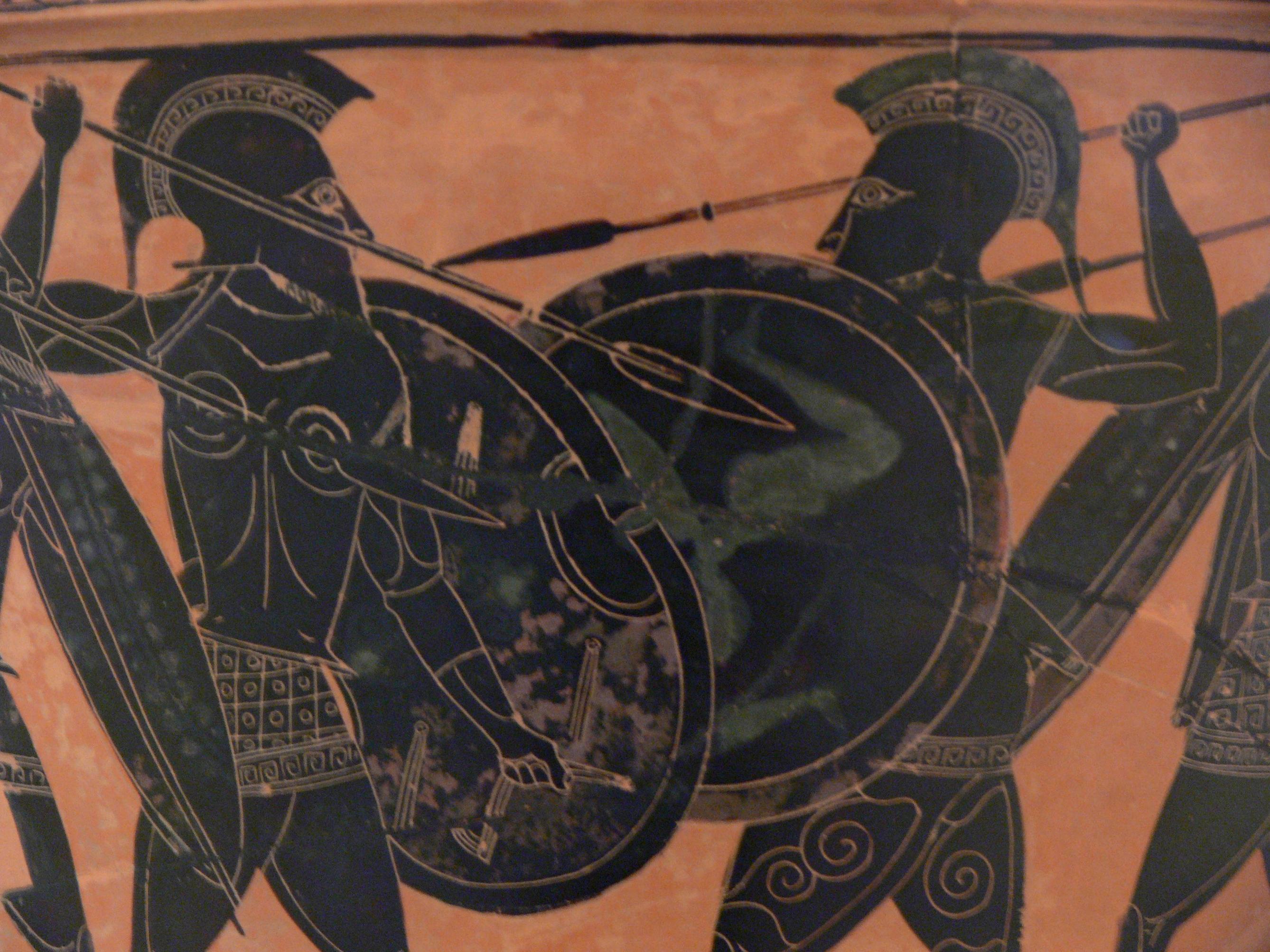 Image showing the shield held close in to the body, with straps and left shoulder taking most of the weight - photo by Grant Mitchell [CC BY 2.0 (http://creativecommons.org/licenses/by/2.0)], via Wikimedia Commons

Firstly, the hoplon was designed to be used in a fairly restricted way - held close in to the body and kept immobile relative to the user. This is much less taxing than holding (for example) a centre gripped 'Viking' shield at arm's length. Keeping the centre of mass close in to the body reduces the effort required not only from the arm, but from the entire body as you don't have to counterbalance as much.

Secondly, the hoplon used what was known as the argive grip - the handle was placed near the right edge, and a strap over the forearm at the centre supported much of the weight. This both helped keep the shield close to the body (see above), and meant that the hand - generally the weakest part of the arm - wasn't taking the full weight of the shield alone as it would in a centre gripped design. Additionally, this specific type of strapped grip had the advantage of letting the arm hang straight, instead of requiring the user to bend their elbow.

Lastly, and probably most significantly, the hoplon was highly convex. This allowed the upper lip to be rested on the user's left shoulder 1 [2], taking much of the weight.

Not the answer you're looking for? Browse other questions tagged warfare ancient-greece armour sparta or ask your own question.

29
How would slaves have addressed their masters in Ancient Greece?
3
How was the Spartan "300" battle recorded?
2
How many Spartan boys survived army training?
9
Did unmarried Spartan women have longer hair than men?
7
How would ancient Greeks have exercised?
6
How many javelins would a Thracian Peltast carry into battle?
17
Why did Athenian philosophers praise Spartan culture and laws, which would preclude philosophers like themselves?
3
Were the ancient Greeks very poor compared to the ancient Persians?