Why would graphite have been confused with lead?

I was reading the wikipedia page for pencil, and came across an interesting fact:

My question is, why was graphite thought to be a form of lead? The density of graphite is ~2.2g/cm^3, while lead is 11.34g/cm^3. They're both gray--but I have a hard time believing that color was the only reason people thought at the time that it was a form of lead. I'm sure I'm missing some context here that someone could elucidate.

Theses minerals were confused because they are quite similar in appearance, attributes and possible usage.

Graphite was previously called plumbago meaning the mineral Galena also called lead glance, which is a lead containing ore, not pure lead (plumbum). The density of pure lead glance (PbS) is only 7.60 g/cm3. They both look really similar and were indeed used for similar applications, for example namely in cosmetics. Kohl and mascara are charcoal – or mainly carbon – and just this galena respectively. Graphite was previously also quite often confused with molybdenite, (density: 10.28 g/cm3) a substance also capable of marking smooth surfaces.

Going by density alone is not very useful when classifying minerals, since densities vary, despite containing the most wanted metal. The numbers cited by you and me are for the pure compounds, usually not found as such in nature.

Galenit is also quite soft, clocking just 2-3 on the Mohs-scale, compared to 1–2 for graphite. 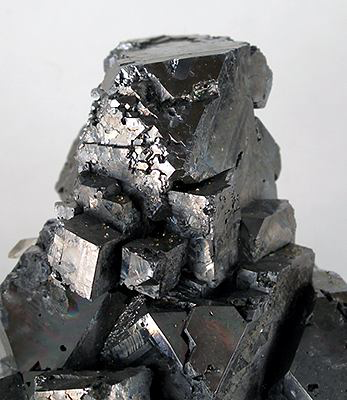 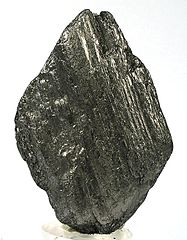 All of these materials can be used as a solid lubricant as well. Making them of strategic importance for military purposes. England banned the export of pencils to Napoleonic France, since the containing graphite is ideal as a lining for casting cannonballs. (Source: Scientific American: Carbon Wonderland (2088))

The three minerals historically named galena, molybdena and plumbago have several common features — they are all soft, dark materials with a metallic lustre. Before the advent of modern chemical methods, these three substances were often mistaken for one another. Because galena (lead(ii) sulfide) was known to be a useful lead ore, it was commonly believed that molybdena and plumbago also contained lead. However, molybdena (which we call molybdenite today) was actually molybdenum(iv) sulfide, and plumbago was what we now call graphite.
(Anders Lennartson: "Made by molybdenum", Nature Chemistry, Vol 6, August 2014, p746.)

Most important is of course the actual application as a writing or drawing tool. Everyone now knows how graphite in pencils works, but a similar effect is achieved in using a stilus plumbeum. These drawing tools are said to originate in ancient Egypt and are allegdly also described by Pliny. This variation of metal point is today most often called a silver point, despite lead being the main component in most cases.

This then closes the circle since modern pencils, containing graphite, are in English often called lead pencil and in German always called Bleistift. Young students often wise crack about licking the tip of a pencil, being unsure whether "it is or is not dangerous" because "lead is toxic", "actually it is not lead and does not contain any lead, so it's safe". At least modern German word usage (and Danish, Dutch, possibly more) and many citizens still confuse the minerals.

The wiki page on graphite contains a bit on it, ultimately this discovery came well before (200 years) graphite was considered something different than 'black lead' https://en.wikipedia.org/wiki/Graphite:

Historically, graphite was called black lead or plumbago.[7][29] Plumbago was commonly used in its massive mineral form. Both of these names arise from confusion with the similar-appearing lead ores, particularly galena. The Latin word for lead, plumbum, gave its name to the English term for this grey metallic-sheened mineral and even to the leadworts or plumbagos, plants with flowers that resemble this colour.

The term black lead usually refers to a powdered or processed graphite, matte black in color.

Abraham Gottlob Werner coined the name graphite ("writing stone") in 1789. He attempted to clear up the confusion between molybdena, plumbago and black lead after Carl Wilhelm Scheele in 1778 proved that there are at least three different minerals. Scheele's analysis showed that the chemical compounds molybdenum sulfide (molybdenite), lead(II) sulfide (galena) and graphite were three different soft black minerals.

It should be noted that it resembles lead ore, not lead...which would presumably weigh a bit less. Wonder if I have my old mineral test kit. Some properties one tests for in identifying a substance:

Hardness. Graphite and Lead are both 1.5 on Moh's hardness scale (https://en.wikipedia.org/wiki/Mohs_scale_of_mineral_hardness). This meant not only did it have the same coloring, it had the same softness to it.

Streak. Both graphite and lead leave a streak on a streak plate.

Magnetism : Both lead and Graphite also show very similar behavior in the presence of a magnet, not magnetic but interacting with a magnetic field.

Graphite actually has a few properties that are quite misleading, as it is simply a carbon arrangement yet still acts as a 'semimetal' and operates as a semi-conductor.

Until you get into more advanced forms of chemical testing, lead and graphite behave much the same.

Not the answer you're looking for? Browse other questions tagged science 16th-century chemicals or ask your own question.

17
What household servants would a Tudor gentleman have had?
8
Where would I find Graham Bell's kite experiment data?
10
Was there a Spanish plan to retake Malta, had the siege of 1565 been succesful?
13
What was El Greco's relationship with the Spanish Inquisition?
2
Would modern aerodynamic design be recognizable to a vehicle expert 100 years ago?
42
Why did Hitler not order the use of poison gas in combat?
5
Why did Germany have so many important scientists and thinkers around the turn of the 20th century?
13
How much authority did a traveling lord have in England in the late 16th century?
3
Who was the first to point out that transmutation of gold would be mostly useless, since it would simply lead to inflation?