Did other American empires also fall to the Europeans?

Since forever, people have subjugated each other to demand labor or resources. A monarchic or centralized power that subjugates several other peoples is an empire.

Half a dozen European empires expanded into the Americas during the Age of Exploration. With the help of infectious disease, these powers defeated lots of local tribes, and some larger groups. Best known are Spain's conquests of the Aztec empire in Tenochtitlán and the Incan empire in Cuzco.

Did other American empires also fall to the Europeans?

Some specific exclusions as I understand them: the Iroquois Confederacy was an important power but association in it was voluntary. The Taíno and Tupi cultures were widely distributed but had no central government to conquer. The Chimú empire was conquered by the Incas shortly before Europeans arrived.

The Tarascan State was also a powerful, centralized empire, occupying about 100,000 km2 northwest of the Aztec Empire. They were enemies of the Aztecs, who could never conquer them. They were subdued by /allied to the Spaniards peacefully around 1520 and were more violently subjugated in 1530. 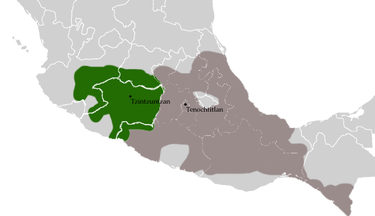 I don't think I remember that since 1500 onwards there were more native political entities in the American continent that were sufficiently centralized so that they could be called "empires".

Not the answer you're looking for? Browse other questions tagged colonization government colonial-america native-americans or ask your own question.

12
Did the Tlingits benefit from resisting the Russians more than other Alaskan tribes?
5
How do totalitarian states/empires usually fall?
31
Why was Germany not as successful as other Europeans in establishing overseas colonies?
9
When did Europeans realize Native Americans had weaker immunity to Old World diseases?
4
Did any native US-Canadian tribes have written language before the advent of the Europeans?
2
Was the Native American population already decimated before settlers and conquistadors arrived in America?
3
Why were the Scandinavians not as expansive as other Europeans in global colonization?