Was Churchill's "backwards" victory symbol a rude gesture to Hitler?

Churchill was sometimes photographed giving the V-for-victory symbol with the back of the hand to the photographer or crowd. Was this meant as a sly "up yours" gesture to Hitler, or just a less common variant of the gesture?

It appears that Churchill was not at first aware of the meaning of the offensive version of the gesture. While he had no title, he was very much an aristocrat, and his insight into the behaviour of the British lower classes was fairly limited. This is plausible: the UK was far more stratified by social class than it is today, which is still quite a lot compared to many other countries.

There is an earlier incident that shows Churchill being naïve about the British lower classes. When Churchill was First Sea Lord before WWI, he needed to consult King George V over the names of new battleships. One of his proposals was HMS Pitt, after one of both of the Prime Ministers of that name. George V rejected that. He had been a naval officer for many years. He knew that sailors use affectionate or mocking nicknames for their ships, the nickname for "Pitt" was just obvious and he didn't want it used. Churchill complained about that, but nobody who actually knew sailors agreed with him.

I wanted to include the pictures of both gestures and add to the given answer.

The gesture was explained to Churchill many times according to his private secretary and Churchill continued to use both the victory sign and the vulgar sign interchangeable with palm facing both ways before he eventually did confine himself to the victory sign (palm facing outwards). As for why once informed he continued to use the vulgar gesture, maybe he was not entirely put off the public surmising he was giving Hitler a private vulgar message with the gesture, or perhaps he just had bigger things on his mind at that point early in the war. 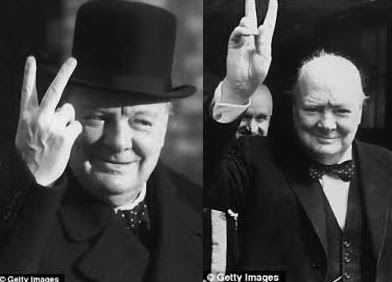 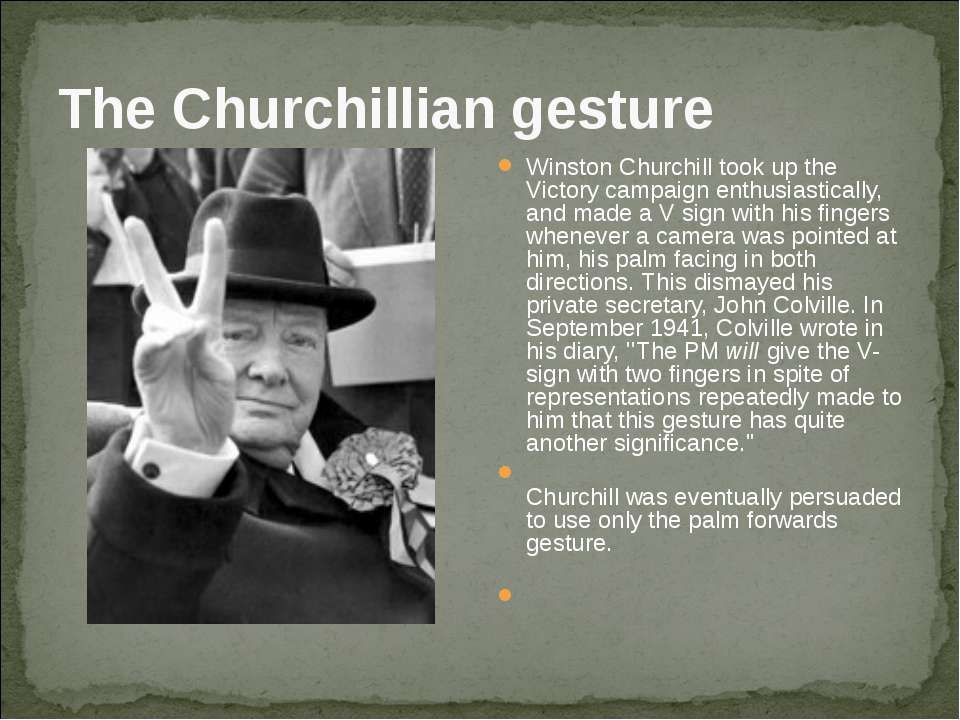 Not the answer you're looking for? Browse other questions tagged world-war-two churchill or ask your own question.

29
What was Hitler like in private?
13
Why was Villa Gaggia chosen as the setting for Hitler & Mussolini's July 1943 meeting?
20
In WWII, what was behind the very early decision to accept nothing but unconditional surrender in 1941-42?
2
Why was Colonel Bill Eddy kneeling in front of FDR and King Saud?
3
Context for peace between UK and Germany around the Fall of France
4
What was the reason for the geographical error in Churchill's "Iron Curtain" speech 5th March 1946?
21
What was the liquor that was based on petrol which was produced in the USSR during the Second World War?
3
When did blackouts occur in Cairo during WW2?
6
How did Charles de Gaulle become the leading figure of French liberation movement?