Why are there two “Smaller & Smaller”s?

So M.C. Escher created a piece of art called "Smaller & Smaller". The problem is, when you look it up, two similar but non-identical pieces of art come up: 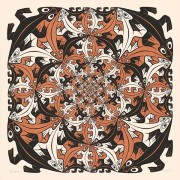 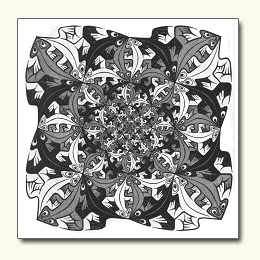 The color difference isn't a big deal, since Escher is known for making copies with different colors. The problem is the other, non-color differences (look at the corners in particular).

So, why are there two of them? Are both made by M.C. Escher, or is one a fake?

Browse other questions tagged 20th-century art netherlands or ask your own question.

6
Is there a name for the WPA Art Style?
3
Are there any Midas portraits from the ancient era?
10
In Dutch history two people are referred to as “William III”; are there any more cases where this happens?
5
What are the red and white sectors of The Tower of Babel (Rotterdam)?
1
In the painting “Ariadne”, by Arthur Streeton, why are the sails of the ship white?
4
Are there the depictions of horsemen in Roman republic other than on the coins?