During WW2, why did the USA occupy Clipperton Island?

Clipperton Island is a little place southwest of Mexico. It is a very small island, owned by France, but I'm not sure if anyone inhabited it at the time of WW2.

Wikipedia says the US occupied this island from 1944 to 1945, but doesn't have a citation. I've seen other websites say it started and ended in 1945.

My question is why? And why 1944? If they wanted to protect it from the Japanese, they were about 3 years late.

From what I've been able to dig up...

President Roosevelt visited Clipperton as part of a tour in 1938 on USS Houston. There doesn't seem to be anything special about the visit, but it does mean the US President and military were aware of the island.

Escorted by the destroyer McDougal, Houston visited Cerros Island (17 July), Magdalena Bay (18 July), San Jose Del Cabo Bay (19 July), Braithwaite Bay (20 July), Clipperton Island (21 July), proceeding thence for the Galapagos Islands, arriving there on the 24th and preparing for the Crossing the Line ceremonies that continued the following morning when the ship crossed the Equator at 0840. After another succession of islands and bays, and fishing trips nearly daily, Houston brought the 5,888 mile cruise to a close at Pensacola, Fla., on 9 August. “This is the third visit I have taken on the HOUSTON in the past four years,” the President told the crew the evening before, “Every moment of the trip has been delightful. I feel the HOUSTON is home.”

USS Atlanta was sent to Clipperton in spring 1942 to check for enemy activity.

After transiting the isthmian waterway, Atlanta then cleared Balboa on 12 April [1942] with orders to reconnoiter Clipperton Island-a tiny, barren, uninhabited atoll about 670 miles southwest of Acapulco, Mexico-in the course of her voyage to the Hawaiian islands, for any signs of enemy activity. Finding none, she ultimately reached Pearl Harbor on 23 April [1942].

The US established a weather station on Clipperton Island with the help of Patrol Yacht Argus II.

In the second, Argus participated in the establishment of a weather station on Clipperton Island, 670 miles southwest of Acapulco, Mexico. Departing San Francisco on 4 December 1944, with meteorological personnel embarked, the converted yacht reached the island a week later and landed her passengers. With the American colors hoisted over the island, the naval weather station was set up that day, supported at the outset by Argus.

Later, two supply ships, USS Seize and LST-563 grounded on Clipperton. Multiple ships were damaged trying to get them off.

Clipperton Island is located 3000 km due west of the Panama Canal and 1000 km from the nearest land. It's in a good location to monitor activity to and from the Panama Canal. I surmise the US were concerned its position and isolation would make it tempting as a forward base for Japanese seaplanes, submarines, or a radio listening post.

By establishing a weather station the US both prevented its use by the Japanese, and were better able to monitor incoming Pacific storms. 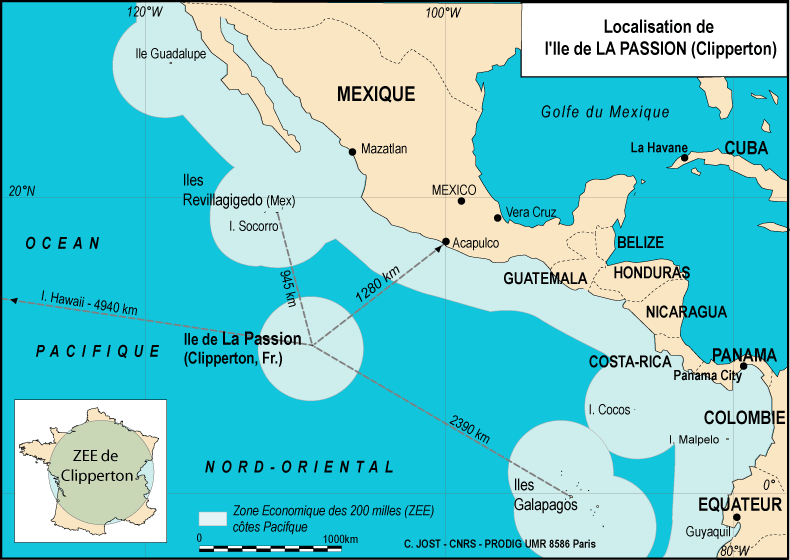 And why 1944? If they wanted to protect it from the Japanese, they were about 3 years late.

I can't say why they waited until 1944 to establish a base, but the Japanese were still a threat to the Canal right up to the end.

Though I'm not sure how aware the US was, Yamamoto proposed in January 1942 building specially designed long-range submarine aircraft carriers to attack the US West Coast and Panama Canal. They actually did this resulting in three I-400 class submarine carrying three attack aircraft each. But by the time they were ready in 1945 the attack was infeasible.

Less ambitiously, the Japanese were fond of using small atolls to resupply submarines and seaplanes. For a relatively small cost, the US could deny the Japanese the only anchorage for 1000 km around.

Unfortunately, there I can't find loads of easily accessible information on Clipperton's occupation in WW2 by the US.

However, what I can find indicates that Clipperton was briefly inhabited up to somewhere between 1937 and 1939 by the French in the form of a restored Lighthouse and a small military outpost. I can find no other records that state the Clipperton was inhabited beyond this time, until the arrival of the US Navy in 1944.

I have found what could be a potentially interesting resource for the United States Naval Institute Proceedings Magazine - Feb 1962 Vol 88/2/708, which contains the article "The Clipperton Operation" by George M. Lowry, Rear Admiral United States Naval Reserve (Retired)

Unfortunately, I cannot access the whole article as it is behind a paywall. Here is what can be seen:

Before World War II, Clipperton Island, a tiny speck in the Pacific some 670 miles southwest of Acapulco, Mexico, was practically unknown except to navigators and occasional fishermen. Politically part of French Oceania since 1932, it came under the administration of the French Government at Tahiti. On 1 December 1944, however, this little island suddenly assumed strategic importance. The Commander in Chief, U. S. Fleet, ordered the Commander Western Sea Frontier at San Francisco to establish at once an expeditionary aerological station on this barren, uninhabited atoll.

The visit by the Catalina flying boat ‘Frigate bird’ commanded by P G Taylor and the British aim to set up an air route across the Pacific were seen by the US as an affront to their Monroe doctrine and their aim to have hegemony in the Pacific in any post war scenario.There was no possibility of the establishment of any form of a British base on the island.In fact I understand the US made it quite clear they would shoot down any aircraft attempting a landing on the island’s lagoon

Not the answer you're looking for? Browse other questions tagged united-states world-war-two france or ask your own question.

111
On 1941 Dec 7, could Japan have targeted the Panama Canal instead of Pearl Harbor in a surprise attack?

14
How did Allies secure southern flank during "Race to the Rhine"?
30
Was the Italian campaign a strategic mistake?
31
Given their reputation for fighting to the last man in the Pacific, why did 700,000 Japanese troops surrender in Manchuria?
6
Why didn't the United States occupy Baja California during the US-Mexican war?
11
How many trucks did Russia and Germany have at the start of Barbarossa?
15
Why does Sugar Island belong to USA?
6
How did mid-19th century American legislation affect the corporate structure of railroad companies?
7
How did East Indies oil lose its "top billing" in the Pacific War as the war went on?
1
Why were some German and Japanese cities bombed more than others during WW2? Is there a scientific consensus?