How were border controls implemented in Western Europe in the 1970s

I'm interested in how reality of crossing country borders in Western Europe looked like in early 70s. Focusing specifically on traveling by car, train and on foot.

I have found a bit of information on Wikipedia which suggest 'free movement of people within EEC', but there are not many details there, plus it covers only few countries, notably missing Austria and Switzerland.

I assume you required a passport to travel to different country. But were they checked for everybody during border crossing or was it only random check? Were cars/backpacks searched routinely? Were passports stamped every time? Were there any visa requirements, minimal amount of money to carry on your person or anything like that?

As it might seem very broad subject, I'm really interested in countries in Alps region (Germany, Switzerland, Austria, Italy, France) and traveling between them and years 1971-1973. Extra brownie points if you know if situation has changed after 1972 Olympics attack.

One of the weaknesses or difficulties in how this question is phrased is its insistence on Western Europe in the seventies while trying to focus on Austria and Switzerland as well.

The problem there is that both countries were not members of the European Economic Community in the 1970s resulting in basically bilateral agreements and treatise for every neighbour of Switzerland and Austria to be considered mandatorily. 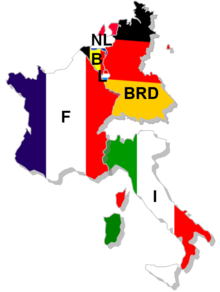 That means 5 agreements for Switzerland with France, Germany Liechtenstein, Austria and Italy. This also means 6 agreement and conditions to list for Austria with Germany, Chechoslovakia, Yugoslavia, Italy, Liechtenstein (and Switzerland again, covered by the first list). Both lists covering 10 years is quite broad.

It seems pretty clear that the borders between Belgium, Netherlands, France, Luxemburg and Germany were already pretty easy to travel across. While in times of heightened terrorist activity, like 1972, border and police controls in Germany were expanded across the board (cf Fahndung and Schleierfahndung) that doesn't really mean that the borders were completey shut tight. The RAF terrorists transported the first captive then dead Hanns_Martin Schleyer in 1977 apparently across all these borders unimpeded and with a comparatively low risk of discovery. This is evidence that any border checks were at best random. Some checks were also so relaxed, not in the least because some borders were also so ridiculously drawn between Belgium (example: Vennbahn), Germany and the Netherlands, that many locals crossed these routinely several times day, for example to go by their agriculture businesses while never subjected to any control at all.

Crossing the border into Austria or Switzerland from Germany was far more complicated and closely regulated, generally. If traveling by train it would stop before the border, then you would have been told to show your ID or travel pass, and you may been subjected to random searches for contraband or smuggled goods. Traveling by car it started to depend on where you were crossing the border. Large crossings being a major stop gap with a similar procedure like with going by train.

This was all quite different if you chose a remote crossing by car. Sometimes you would notice that all of the sudden the road marking and street signs were subtly different and you were now in a different country. This was even less pronounced when crossing the green border, since this was patrolled at random but without a fence or wall.

There were generally no visa requirements at all. But it was not a minimal amount of money required but to the contrary: a maximum amount of money to bring in was allowed. Since every country had its own currency, in order to avoid currency speculation and tax evasion these amounts for money allowed differed enormously over time and was different for each country.

Keep in mind though that there was a enlarged special customs zone (Zollgrenzbezirk) around 30 km inwards from the actual border where you could have been subjected to just the same controls at random like at the actual crossing.

A joke from that time illustrating the green border between Germany and Austria went as follows:

A Bavarian border patrol finds a hanged man in the forest. Apparently suicide. Trying to avoid all the paper work that would ensue they come up with the idea of cutting him down and rehanging him on the Austrian side of the border, making them do all the paper work.
They do so.
A few hours later an Austrian border patrol finds that suicide on their side of the border. Says one of the Austrians to the other:
"Oh my God, look! He's back up there again!"

In the seventies border control was mainly passport control. Only when the customs or the border police had reasonable doubts would passengers be checked. I'm talking about borders within the EU as it was then. The Swiss and Austrian borders weren't much different. East Germany was a very different story.

I'm not entirely sure, but the Benelux nations had fairly easy passport controls for passengers on their internal borders.

Freight was a very different story. Trucks had to wait for hours and fill in reams of paperwork at each border. At truck going from (say) Rotterdam to Lisbon had to pass four borders (NL-BE, BE-FR, FR-SP, SP-PO). The trucker had to add least 4 hours per border. 8 or more hours wasn't unusual at all. Even 24 hours delay wasn't uncommon.

(A friend of mine is trucker, he gave me that information)

I hitchhiked alone all over Europe in the 70s after leaving the UK as an unemancipated minor in 1972. At that time I couldn't even buy a Youth Hostel card without parental consent, so I slept rough in campsites without a tent or even a groundmat, I am surprised now that I was able to do that. But despite my age it was remarkably easy to pass through borders with just my British passport checked. I only remember having a cursory search of my backpack on one occasion traveling from Holland into Belgium, despite that Benilux agreement they wanted to check for dope.

My second trip down to Spain I crossed the border in the cab of a Lorry. I still looked a lot younger than my age, but got waved through after pleading that my mother lived in Spain and I was on my way to her. That time was one of many when I crossed borders with very little money. When asked, I faked that I had another wad of cash separated from the paltry amount I showed the border guard. I think that there was a requirement to make a brief trip out of Spain after six months before we were both in the EU. My mother lived there for 20 years.

I started working as crew on private yachts as, before we joined the EU, this provided a legal status for work in places where there were ports.  In the winter time these jobs dried up and I headed for the mountains. On one occasion I crossed the channel with less than £10 in my pocket heading for Switzerland with no problem at the border and I got illegal work in a Geneva cafe within a day. My second winter in Switzerland I worked in an amazing backpacker's ski Hostel, 'Club Vagabond' in Leysin. We all had a three month permit to work with just a simple slip of paper in our passports and only our entry stamp.  I think something similar was in place in the ski areas in Austria.

There were countries that I referred to as 'Open Door' countries where it was not only easy to enter and stay for quite some time, there were good possibilities for finding work too.  Although I did not take work in Germany or Austria I considered them both 'Open Door' just like Switzerland, but by contrast, on my first attempt to work in Amsterdam I was told that if I had been a boy they could have offered illegal dock work, not so easy. Competing with other nationals in these strong work ethic countries the Brits had to overcome the problem of being labeled 'lazy workers'. You were a commodity, not part of the social fabric so language was immaterial.

What I call 'Open Door'. is not the policy of any Government, but rather it's driven by the necessity of demand. I doubt that the UK will stop attracting workers from all over the globe, but after Brexit any newly arriving EU workers will lose their rights and will be far easier to exploit in below minimum wage jobs.  After the New Year English people will be competing with zero rights, illegal workers for jobs. The problem will be so vast it will be beyond feasible regulation by immigration control, so only the rogue employers and the wealthy elite will profit greatly from the change.

The new restrictions on travel to Europe will limit all British passport holders to a stay of no more than 90 days within the same 160 day period; that would have wrecked some of my best teenage travels and adventures!  My life would have been dramatically different if the new post-Brexit restriction had been in place back then. Our world will get a little bit smaller and a lot more restrictive than it was over four decades ago; that is a regression I detest.  I feel we have really slammed the door shut on opportunities for our young people, even Erasmus will end and I am truly sorry my selfish generation may have inflicted this sad injustice on them.