Are there pictures expressing anti-occupation sentiment directed at British Forces in Germany before 1990?

Researching the history of the British Army of the Rhine it seems difficult to locate pictures of certain aspects regarding the German view of these times and troops. The Rhine Army or Rhine Garrison was an occupational force in Germany from 1945–1994, with slight status modifications over the years, notably in 1955 and 1994, though still present on German soil today, now renamed to British Forces Germany.

Some examples for these sentiments as reported from the German as well as from the British side are in one German magazine: Schindluder gespielt (1950) Eine Rabiate Antwort (1958), „Wir sind die halfforgotten Army“ (1977), Briten raus! (1991)

There were stickers, signs and (little) posters on cars or in shop windows, especially in bars which signaled that British soldiers should please abstain from entering. These were in the form of a Union Jack and some accompanying text in English. This kind of behaviour was to be found wide-spread at least throughout the 1980s, very possibly much earlier.

These posters, signs and stickers existed at least in the surrounding areas of where the 7th Armoured Brigade was stationed. Other areas with similar posters on display were presumably to be found in or around these out-of-bounds areas, which would be the likely source for one of the phrases used.

Prior research: Searching for British-German relations from below there are several documents and documentaries, from both sides, celebrating the friendship of both nations expressed by amiable social relations between soldiers and the locals. These are evidently not showing too much of the problems and tensions that were surely present and documented in written words.

One such poster and the raising tensions is evidenced in this article from 1992, but only mentioned in the online version, not depicted:

Going for the origianl article scan reveals this late example from 1992: 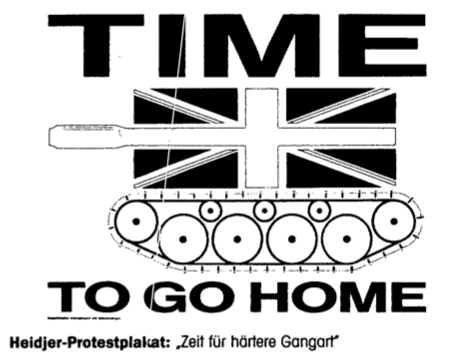 That is a poster used by an official "citizen initiative", founded in 1987, when this variant was designed. This variant was used for example in September 1990, when this initiative blockaded a train transport with fresh tanks and forestalled the unloading for a few days: 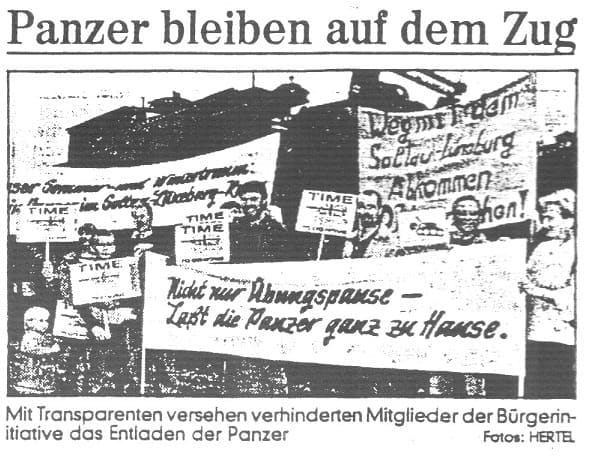 Are there any pictures expressing this anti-occupation sentiment directed at the British Forces specifically from before 1990?

Browse other questions tagged 20th-century germany occupations or ask your own question.

8
Why didn’t Britain use its vast navy to get past trench warfare?
18
Have Germany and Poland ever signed a peace treaty after WWII?
10
How were British personnel employed in the colonies after independence
9
Was the Soviet Union in 1945 seeking to capture German soldiers and civilians, or drive them west?
21
What East German laws and regulations were extended to the West after unification?
21
Was there a pre-determined arrangement for the division of Germany in case it surrendered before any Soviet forces entered its territory?
2
Which factors led to the different casualty ratio betwen British and German forces during the Battle of Normandy?
3
Are there churches that belong to the German Armed Forces?
10
Were union disputes the only reason for low female employment in WWI German factories?