What is the earliest evidence for the use of hearing aids?

reportedly used to cup his hand behind his ear, the better to hear the affairs of state...Historically, the cupped hand was probably first replaced by a rolled up leaf or hollowed out animal horn.

There are references to medieval hearing aids in a number of articles online. For example, The (Big) Timeline of Hearing Aids states (under the heading 13th to 15th century):

Really early on, people would use animal horns and hallow bones as sort of an ear trumpet. While it helped a small amount, it was nothing close to an ear trumpet made of metal. It was the first sign of an attempt to aid the hard of hearing.

Also, the Textbook of Hearing Amplification, with reference to K. Berger’s The Hearing Aid, says that animal horns were used to aid hearing as early as the thirteenth century.

A little outside the medieval period, in 1588, the Italian scholar Giovanni Batista Porta described

Despite these references, the only images I have found from before the 17th century appear to be false leads: this picture taken in the Musee d'histoire de la medecine in Paris appears to have been mislabelled as medieval, likewise this picture. This Wikipedia article is of little help; it dates hearing aids as late as the 17th century (see example below). 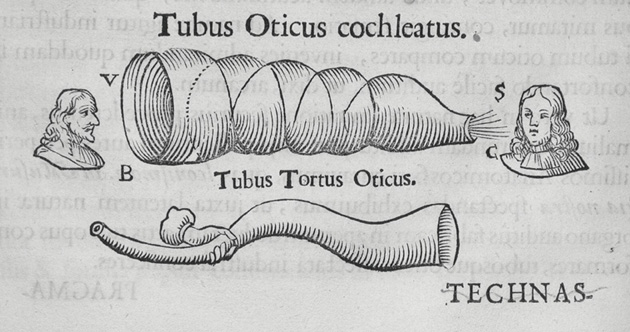 Even in Ancient times, it is possible that some kind of hearing aid may have been used. Given that the Ancient Greeks had an in-depth understanding of voice amplification and acoustics (see this pdf), it is not inconceivable (but I’m not assuming) that they had an aid for hearing loss, just as they did for poor eyesight (see this Hist SE link). However, the only references I’ve found relate to people born deaf (and they aren’t very complimentary): there appears to be nothing online relating to hearing loss in the ancient world.

In short, the references I've found are at best vague and do not give any details or show any evidence or cite any contemporary sources. At worst, the information appears to be wrong. However, there is enough here to suggest that there may be evidence from the medieval period, if not earlier.

Aside from the use of the hand to cup the ear, what is the earliest evidence for the use of some kind hearing aid? Evidence (which can be dated at least approximately) could be:

Several centuries before Christ the Greeks brought a variety of large shells to Phoenicia. They hardened these with paint and used them as acoustical cornets.... [pp. 8]

Strange bronze objects which were found near Pompeii are supposed to have been used by the Romans as acoustical cornets. ... Archigenes... [circa 100 A.D.] believed that a loud sound, conducted into the ear by means of a "tuba" would stimulate the auditory system (Feldmann, 1970) [A History of Audiology]. [pp. 8]

Girolamo Cardano's Du Subtilitate, published in Nuremberg in 1551.... described how sound may be transmitted to the ear by means of a rod or the shaft of a spear held between one's teeth. [pp. 18]

The oldest known graphical representation of a hearing aid device is a seventeenth century engraving [the one included in the question]... in a 1674 publication by Athanasius Kircher. [pp. 8]

One other possibly useful entry in the bibliography, despite the alarming question mark, is Güttner, W. History of the Hearing Aid. SRW Nachrichten, No. 21, 23-24, 1966(?) [sic].

EDIT: Several uncited texts online claim that Alcmaeon of Croton constructed an ear trumpet, and an answer establishing that would be better yet.

Not the answer you're looking for? Browse other questions tagged middle-ages ancient-history technology or ask your own question.

25
What evidence is there of the vision aids people used before the invention of eyeglasses in about 1286?

2
Earliest use of Renaissance Era innovations in Islamic countries & culture?
25
What evidence is there of the vision aids people used before the invention of eyeglasses in about 1286?
14
In Europe, why were there few portraits showing a real likeness of the subject before the 15th century?
2
What is the earliest mention of use of spyglass by seafarers?
21
Did horse sacrifice persist in Christian Europe?
7
What is the earliest depiction of a crane?
13
What did the ancient Eastern world think of the ancient Greeks?
42
Earliest evidence of objects intended for future archaeologists?
25
Was frequent bathing for personal hygiene in medieval Europe common or not?