How did the Trojan allies get to Troy?

Also, across which territory did they pass? From which side of the world did they come?

Trojan war is known to us really only through Homer. His epic poems are more works of mythology than history. So the events of Homer's war are not really historical facts that can be reasoned about in this way.

We can fairly reasonably trust some of the basic facts Homer presented though. For instance, here's a map of Bronze Age Greece, with place names given by Homer. 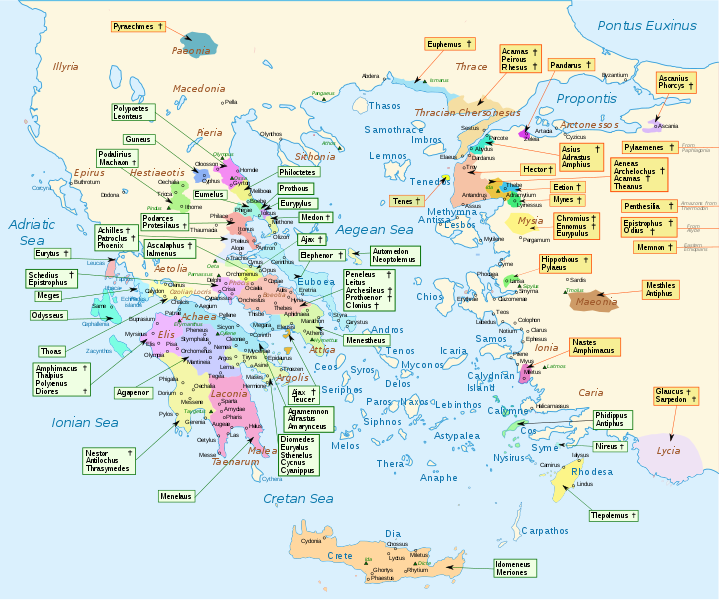 One thing you may notice immediately is pretty much every place is on the coast. There's a reason for that. Boat was by far the fastest means of travel at the time, but even by the standards of the day, Greek society was maritime-based. Particularly in Anatolia, the powerful Hittite Empire controlled the interior, but anywhere a boat could reach in this area was instead Greek.

Troy, where the map-makers have placed it, is also a coastal city. So it frankly wouldn't have made much sense for anyone who ever attacked it, barring neighbors who share a border (or the Hittites) to have arrived any other way than by boat.

In fact, the part of the Illiad all these place names are taken from is called the Catalog of Ships*. According to that work this was accomplished with a fleet of over a thousand ships arriving from 29 different places.

* - This is considered by some to be a later work, tacked onto Homer's

7
How did ancient mystery religions impact Christianity?
20
How did ancient empires account for slow propagation of information e.g. in their legal codes?
5
Did Ancient Egyptians in the 2nd millennium BC practice Astrology?
9
Why do people say, “Alexander the Great conquered the world?”
8
Why weren't the Egyptians attacked on sight in the ancient Battle of Megiddo?
3
Did the Palmyrene Empire actually own territory beyond the Euphrates?
0
What is a “tar shower?”
3
Which groups of people were awake at night in antiquity?
11
What did the ancient Eastern world think of the ancient Greeks?