Did George Orwell go by his alias in private life?

This is an extremely specific question, but I can find no resource that suggests that he went by Eric Blair except in his family life.

I am curious if he introduced himself as Orwell at gatherings, or in private life on the street.

Perhaps there is a letter or biography that I'm unaware of that would shed some light on this.

As you noted, he used Eric Blair in his family life even though he once wrote

and this private use is most graphically illustrated by his gravestone: 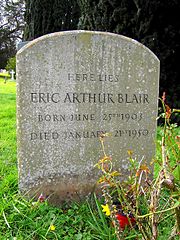 However, he also went by his birth name in other areas of his private life. Most obviously, this included people he knew before he adopted George Orwell as his pen name with the publication of Down and Out in Paris and London in January 1933, but it's more complicated than this. This Newsweek review of Bernard Crick's book George Orwell: A Life notes

His simultaneous use of two names during most of his adult life was one method of cultivating the Mystery around him; another was his habit of keeping different groups of friends very much apart. Crick says even years after Orwell's death people were often astonished to discover who else he knew.

At the same time, Crick

John Rodden, in George Orwell: The Politics of Literary Reputation, also notes this tendency of Orwell / Blair to compartmentalize his life. This article elaborates further on this:

Over the years George Orwell would have his own life, seperate from Eric Blair. Orwell had his own set of friends, and Blair HIS own. It was part of Orwell’s love of putting his life into compartments. Friends would talk about how Orwell would keep friends they had never met, as if Orwell made an effort to keep everybody from knowing everyone else.

Thus, how he was addressed at 'gatherings' would have depended on which set of acquaintances he was with.

When Orwell / Blair, after the death of his first wife, went to live on the Scottish island of Jura, the "locals knew him by his real name of Eric Blair". He also used his real name for legal purposes: for example,

Not the answer you're looking for? Browse other questions tagged famous-people or ask your own question.

1
What did US Supreme Court Justice Potter Stewart study as an undergraduate?
5
What Insubordination Did Colonel Sanders Do With Prudential Life Insurance?
4
Who had a private jet before Frank Sinatra?
11
Did Jeanne d'Arc really tell a woman that she couldn't serve on the battlefield?
13
How did Jean Parisot de Valette, 49th Grand Master of the Order of Malta, die?
10
When did Robert Briscoe die?