When was the first known international call between two heads of state or government?

A number of international phone connections were established a little before or just after 1900:

Prior to these, the first ever international call was apparently made in 1881 (New Brunswick, Canada - Maine, USA).

With President Rutherford B. Hayes installing the White House's first telephone in 1877 and British Prime Minister William Gladstone doing likewise at 10 Downing Street in around 1884, at least two world leaders saw the potential for rapid communication early on. William McKinley (1897 - 1901) was also keen on the new gadget, being the first to use it for a US presidential campaign.

As the first transatlantic call was not possible until January 1927, these leaders would obviously not have been able to talk to each other but there were other (early) possibilities, most obviously perhaps in Europe. One or more calls between the British and French leaders during World War I seems a distinct possibility but I haven't been able to find any evidence.

Churchill and Roosevelt were phoning each other even before Churchill became Prime Minister in May 1940, but this was 50 years after the first international phone lines were laid down, and more than ten years after transatlantic calls started. There were several major events (not least World War I) during these years and thus potentially plenty of reasons for leaders to want to communicate quickly and personally.

When was the first (known) time the leaders of two countries spoke to each other, either by radiotelephone or telephone?

Note: I'm only interested in spoken communication. In countries with a monarchy, either the monarch or the prime minister, chancellor, e.t.c. (i.e. Head of Government) would be acceptable as a 'leader' for the purposes of this question. A governor general or representative of a dominion or colony would be of secondary interest. 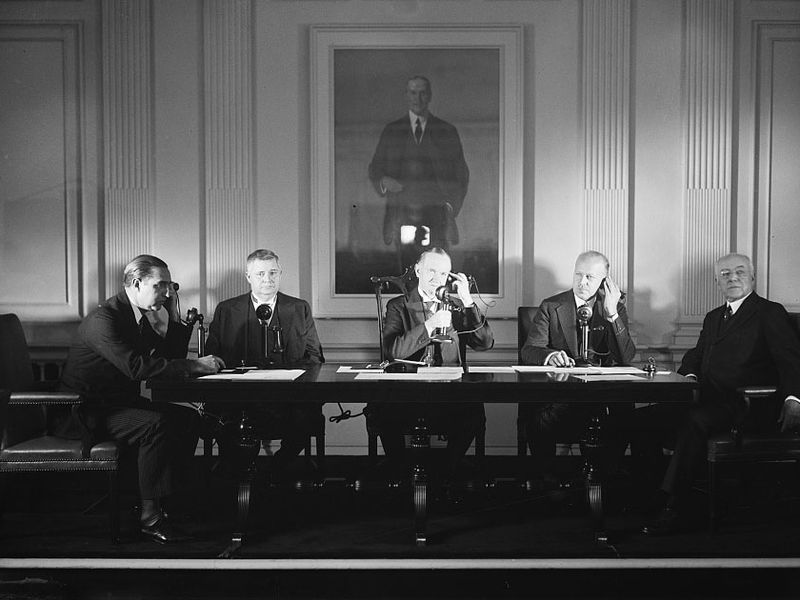 President Coolidge conducts the first transatlantic phone call with a foreign leader, the King of Spain in 1927 (Library of Congress)

Smithsonian
The first official transatlantic phone call happened on January 7, 1927, between New York and London. A year and a half later (June of 1928 ?), Calvin Coolidge became the first president to connect with a foreign official in Europe, Alfonso III of Spain.

After thanking the king for Spain’s support of the Kellog-Briand Pact, an international treaty meant to prevent the use of war as a method for resolving disputes, Coolidge launched into a soliloquy on the value of the new technological wonder:

First off planet phone call 1969
In 1969, Buzz Aldrin and Neil Armstrong set foot on the moon, and soon after their moon shoes touched the lunar surface, they received a phone call from the President of the United States, Richard Nixon. “Hello Neil and Buzz, I am talking to you by telephone from the Oval Room at the White House, and this certainly has to be the most historic telephone call ever made from the White House.”

1878, Queen victoria's first Call
Bell demonstrated the telephone to Queen Victoria on 14 January 1878 at Osborne House on the Isle of Wight with calls to London, Cowes and Southampton. These were the first long-distance calls in the UK.

1879 British thoughts on the Telephone
This year, Mr. William Preece (later Sir William Preece) of the Post Office Engineering staff, when asked whether the telephone would be an instrument of the future which would be largely taken up by the public, replied “I think not”. Questioned further he said “I fancy the descriptions we get of its use in America are a little exaggerated; but there are conditions in America which necessitate the use of instruments of this kind more than here. Here we have a superabundance of messengers, errand boys, and things of that kind.”

April 1, 1891: First cross-Channel telephone cable between England and France opened to the public

Not the answer you're looking for? Browse other questions tagged communication modern or ask your own question.